Evangelicals used social debate to express their views in open conversations with LGTB movement. Catholics did a more confrontational 'no' campaign. 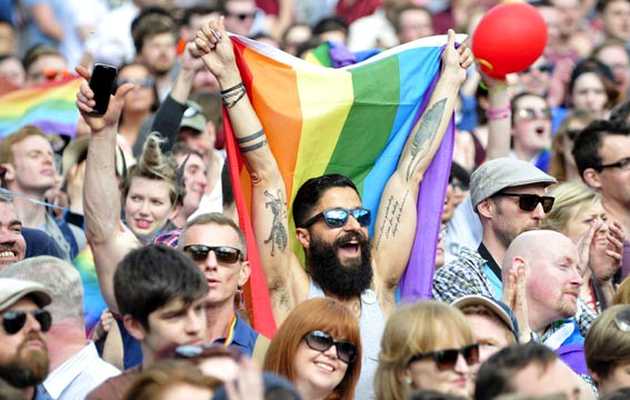 Ireland has become the first country in the world to legalise gay marriage by popular mandate – in what the nation’s only openly gay minister has described as a “social revolution”. With the first firm result declaring around lunchtime on Saturday that more than 70% of voters in Dublin North West had said yes to same-sex marriage, all the trends are pointing to at least a 2-1 majority in favour.

The yes vote from the republic’s electorate maerked a milestone in Ireland’s journey from a Catholic church-dominated state to a more liberal, secular society.

With tallies suggesting massive majorities for the pro-gay marriage side in the cities of Dublin and Cork, the overall result show a big shift given that the Irish state only decriminalised homosexuality 22 years ago.

Confident of securing a yes vote across the republic on Saturday, Ireland’s prime minister, Enda Kenny, declared that the result was sending a “message of pioneering leadership” from the Irish people.

His cabinet and Fine Gael colleague Leo Vradkar, Ireland’s first openly gay minister, said: “We’re the first country in the world to enshrine marriage equality in our constitution and do so by popular mandate. That makes us a beacon, a light to the rest of the world of liberty and equality. It’s a very proud day to be Irish.”

Opponents of gay marriage had also conceded by mid-morning that the yes campaign had triumphed. Dave Quinn, director of the religious-traditionalist Iona Institute, tweeted: “Congratulations to the yes side. Well done.”

A pro-gay Irish Christian campaign group urged the leaders of the main churches in Ireland to embrace the change. Dr Richard O’Leary, an Anglican member of Changing Attitude Ireland, also appealed to the churches’ hierarchies to support gay marriage in Northern Ireland – the only part of these islands were same sex couples still cannot get married.

O’Leary said: “We hope that the Catholic bishops and Protestant church leaders in Northern Ireland will notice how so many ordinary people of faith in the Republic of Ireland have voted yes and that they too might be encouraged to support the extension of civil marriage equality to same sex couples in Northern Ireland.”

Evangelical Christians in Ireland are a minority of about 500 chuches, according to data of the Evangelical Allliance Ireland. Most of evangelical believers were expected to vote "no" in the referndum, the EAI said

“People should vote with their conscience, but we would advice a ‘no’ vote (…) because we don’t feel that redefining marriage is the best way to tackle the problem of discrimination” national director Nick Park said.

But evangelicals differentiated their campaign from the confrontational Catholic no campaign.

Park added: “We actually take the view that winning the battle to get the right result in the referendum is not the main thing, and if Christians end up speaking untruthfully, or in ways that dehumanise others, then they’ve lost the battle, irrespective of whether they get the result they want, from the referendum.”

One of the initiatives to help the dialogue was a book issued by the EAI in which the evangelical approach was explained, in a project which also included contributions from atheist and LGBT leaders.

Read more about the Irish evangelicals' approach to the referendum here.

THE CHANGE IN LAW

The proposition drawn up by the Fine Gael-Labour government asked Irish voters to amend their 78-year-old constitution, which originally defined marriage as purely between a man and a woman.

Voters were offered the chance to amend that constitution to: “Marriage may be contracted in accordance with law by two persons without distinction as to their sex.”

Currently 17 countries, including the UK, Spain, France, Argentina and Denmark, along with several states in the US, allow same-sex couples to marry.