People in France, Spain, Germany, Italy and Sweden are more interested in “spirituality” than in “religion”. A global survey shows that China and Indonesia have a great interest in religion. 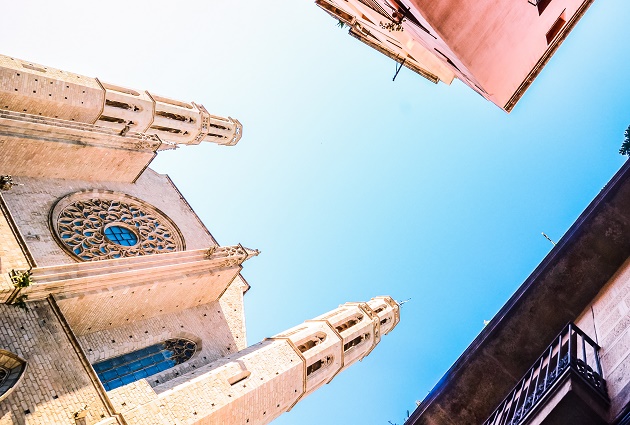 Europe is a secularised continent and the interest in religion is much lower than in the rest of the world. This has been confirmed again by a major “Global Trends” survey.

Ipsos Mori asked 18,000 people in 23 countries about many of areas of life, including the use of technology, personal health, the way environmental protection is perceived and how they see the future. 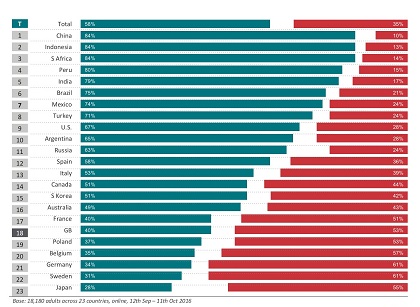 When asked about faith, 84% of respondents from China said they agreed with the statement: “I am interested in having a more spiritual dimension in my daily life.”

Eight in ten people in Indonesia, South Africa and Peru did also express this longing for more spirituality. 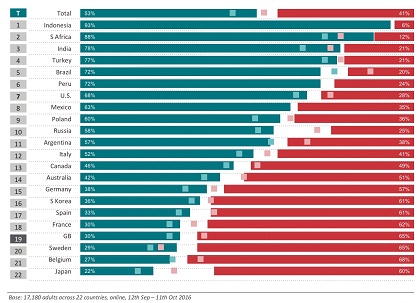 Another question was about the people’s practice of religion. Countries like Indonesia (93%), South Africa (88%), India (78%) and Turkey (77%) had many respondents saying they agreed with the statement: “My religion / faith is very important to me.”

According to the study, based on answers given in September-October 2016, the interest in religion has grown and become a majority worldwide. In 2014, less than half agreed with the sentence “my religion / faith I very important to me” in the same survey. Now, 53% did so.

When asked about their view of faith, respondents in these conutries generally ranked below respondents from the other continents (except in the case of Turkey).

My faith is very important to me         | More spirituality daily life

EUROPEANS MORE OPEN TO FAITH THAN in 2014

The interest in spirituality was higher than the appreciation of religion in most of the countries.

And, except for Belgium, there is an increased interest in faith in all European countries surveyed, when the numbers are compared to 2014.