Lloyd Jones was persuaded that both theology and passion had to walk hand in hand. A preacher needs both. This, of course, was the primitive biblical pattern. 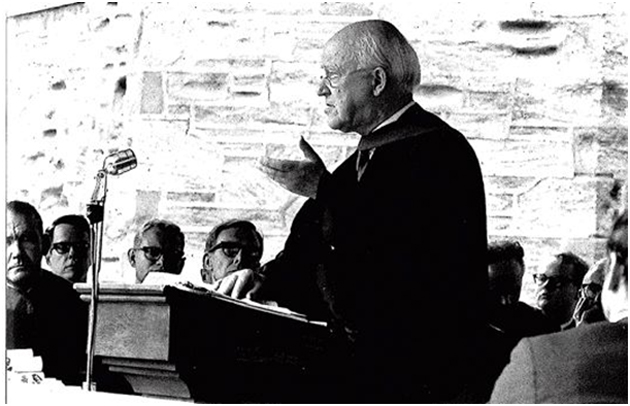 It was way back in 1969 when Dr. Martyn Lloyd Jones defined preaching as “logic on fire” whilst teaching at his local church in Westminster Chapel (London).

Some fifty years later, it seems to me that Lloyd Jones’ definition is exactly what we preachers need to be aiming at in our day and age.

Let me explain what I mean.

There appears to be double tendency at work within twenty-first century Evangelicalism. On the one hand, there are the logicians. Although few in number nowadays these individuals tend to be fascinated with theological precision. The world of ideas is their lot. But that’s basically as far as they get.

They remain in their theological ivory towers with little interest in the experiential side of religion. Content with their complex metaphysical methodologies, they abide by the letter of their systematic theologies and confessions of faith without coming to know anything of the Spirit who inspires such documents.

On the other hand –and this is very much the majority tendency today- we have the firemen. For them a sermon is nothing but cheap emotional humanism. Raising their voice becomes a sign of the anointing. Rather than diving into Scriptural exposition, firemen have only got three points to their messages: application, application and some more blessed application. Sermons are primarily about feeling something welling up within. If there are no fiery sensations accompanying the message, then the Spirit of God is not at work (or so they think).

I believe it’s time to steer a middle-coursed balance between these two extremes; and I am convinced that it’s here where Lloyd Jones can be of assistance. Logic is necessary. Fire is necessary. It should no longer be a question of either/or but of both/and. Logic and fire. Fire and logic.

Maybe if I expand Lloyd Jones’ description of preaching, it will help a little:

“What is preaching?” he asks.

Here is his full answer:

“Logic on fire! Eloquent reason! Are these contradictions? Of course they are not. Reason concerning this Truth ought to be mightily eloquent, as you see in the case of the Apostle Paul and others. It is theology on fire. And a theology which does not take fire, I maintain, is a defective theology. Preaching is theology coming through a man who is on fire. A true understanding and experience of the Truth must lead to this. I say again that a man who can speak about these things dispassionately has no right whatsoever to be in a pulpit; and should never be allowed to enter one”.

Lloyd Jones –who was for twentieth century British Protestantism what Charles Spurgeon was for the nineteenth- was persuaded that both theology and passion had to walk hand in hand. A preacher needs both. This, of course, was the primitive biblical pattern. The apostles and prophets were united in their love of sound doctrine and they burned in public to make it known. As Paul wrote to young Titus, “Speak the things which become sound doctrine” (Titus 2:1).

The part I think we need to boost most in our days is the theological side. I come across few experts in Scripture and the key tenets of the Protestant Reformation. As I preach at different events I encounter plenty of young men excitedly willing to lay their lives down for the Lord on the mission field; but I find few Scriptural champions amongst them. Religious emotions can be no substitute for the solid teaching of the Word of God. After all, if we are not filled with Scripture, what will have to impart to others whilst engaged in Gospel-centred mission work?

Over a hundred years ago Abraham Kuyper made a few piercing judgments in this regard. “How can we continue to carry out missions unless we have a well-defined Gospel to preach? Or is it possible to imagine anything more monstrous than so-called liberal missionaries preaching only humanity and colourless piety, and met by the pagan sages with the answer that they themselves in their cultured circles have never taught or believed anything else than just this modern humanism?” And again, “Our sainted martyrs shed their blood not for mysticism and not for philanthropic projects, but for the sake of convictions such as concerned the acceptance of truth and the rejection of error”.

In our own days, Iain Murray has underlined the same truth. “Of all the lessons which the eighteenth-century revival taught the Church, none was more important than the practical demonstration that scriptural preaching, accompanied by the power of the Spirit of God, is the divine means for extending the kingdom of Christ”.

In both cases, Kuyper and Murray would be in hearty accord with Lloyd Jones. Doctrine and passion, theology and fire must be wedded together again.

At a practical level, then, how could we forge such a recovery? I’d suggest three key sources.

We need logic. We need fire. Or as Brother Lloyd Jones would say, “We need logic on fire!”