The government of the Central American country has not imposed restrictions and evangelical churches are split between those who closed their worship places and those who keep celebrating services.

Markets such as this one in Managua, Nicaragua, have not been restriced during the Covid-19 crisis. / Photo: CIAT, Flickr, CC

At least 32 evangelical pastors have died in May and June 2020 due to Coronavirus in Nicaragua (Latin America), although some raise this number to over 40.

Newspaper Maranata of Costa Rica was able to confirm this information with sources in the neighbouring country.

The Nicaraguan government has not implemented general restrictions to fight the Covid-19 epidemic. Governmental activities, sport and culture events, businesses, industry and religious activities have not been asked to stop.

This has caused a debate among evangelical churches in the country. Some Christian leaders said their worship places should remain open, while others have opted for a total closing of church buildings.

Some of the churches who chose to remain open think they can do so while following the security indications of the World Health Organisation (WHO): respecting social distancing, using facemasks and avoiding shaking hands.

What is sure, according to Maranata, is that even these churches suffered a strong fall in attendance, since the majority of the population fears being infected.

Analysts in Nicaragua link the decision of keeping worship places open or closed to political tensions and attitudes of support of the government led by controversial President Daniel Ortega, on one side, and expressions of protest and disagreement, on the other.

The Roman Catholic Church in Nicaragua cancelled all their activities since March, and organisations such as the Baptist Convention decided to close their worship places since June, a decision that some say was taken too late.

According to data collected by Spanish newspaper ABC, Nicaragua is one of the countries in the world that is informing with less transparency about the evolution of the Covid-19. Its government has also been one of the less interested in taking drastic measures to stop the epidemic.

Another source speaks of 44 deaths

Latin American news website Evangélico Digital accessed to a document signed by the Nicaraguan Evangelical Alliance in which it  listed the names, surnames and date of passing of 44 Nicaraguan evangelical pastors. 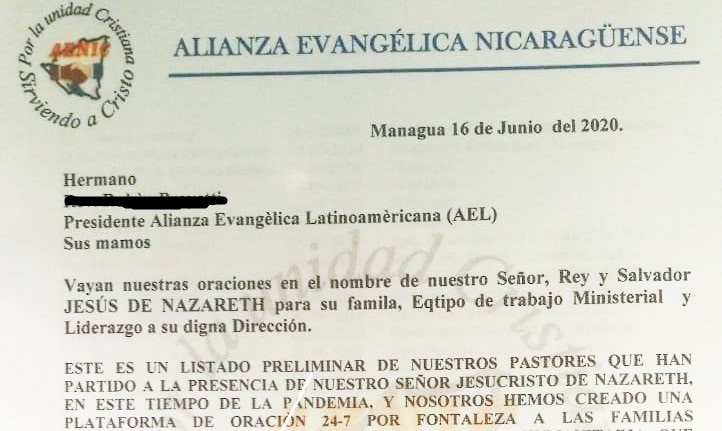 Detail of the letter of the Evangelical Alliance of Nicaragua reporting the deaths of 44 evangelical pastores between May and June 2020. / ED

“This is a preliminary list of our pastors who have passed away and went to the presence of our Lord Jesus of Nazareth in this time of pandemic”, says the letter sent to the Latin American Evangelical Alliance. “We have set up a 24-7 prayer platform for strength for the pastoral families as well as a humanitarian aid project”.

In the letter, the national Alliance also explains that not all deaths have been confirmed to be caused by the Covid-19, and adds: “We thank God for the fact that several pastoral families have completely recovered from the disease”.

Published in: Evangelical Focus - world - Over 30 evangelical pastors in Nicaragua have died due to Covid-19