A new time of peace among the ‘children of Abraham’

The White House hosted the signing of the “Abraham Accords”, which will allow “Arabs and Israelis, Muslims, Jews, and Christians to live together, dream and pray together”. 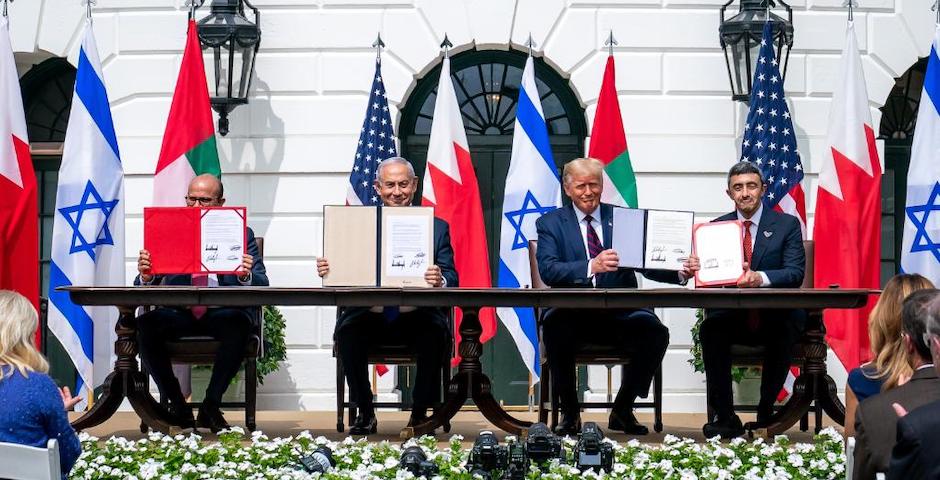 The signing of the Abraham Accords took place in the White House. /White House

This Tuesday, September 15, Israel signed the announced peace agreements with the United Arab Emirates and Bahrain, with the mediation of the United States.

“We’re here this afternoon to change the course of history. Thanks to the great courage of the leaders of these three countries, we take a major stride toward a future in which people of all faiths and backgrounds live together in peace and prosperity”, Donald Trump started saying.

These ‘Abraham Accords’, a name chosen by the US administration, open the door to “Arabs and Israelis, Muslims, Jews, and Christians to live together, pray together, and dream together, side by side, in harmony, community, and peace”, Trump pointed out.

He also stressed that “Muslims around the world will be able to visit the historic sites in Israel and to peacefully pray at Al-Aqsa Mosque in Jerusalem”.

Netanyahu: “This brings hope to all the children of Abraham”

“To all of Israel’s friends in the Middle East, those who are with us today and those who will join us tomorrow, I say: As-salamu alaykum. Peace unto thee”, he continued.

According to Netanyahu, “the blessings of the peace we make today will be enormous. First, because this peace will eventually expand to include other Arab states. And, ultimately, it can end the Arab-Israeli conflict once and for all”. 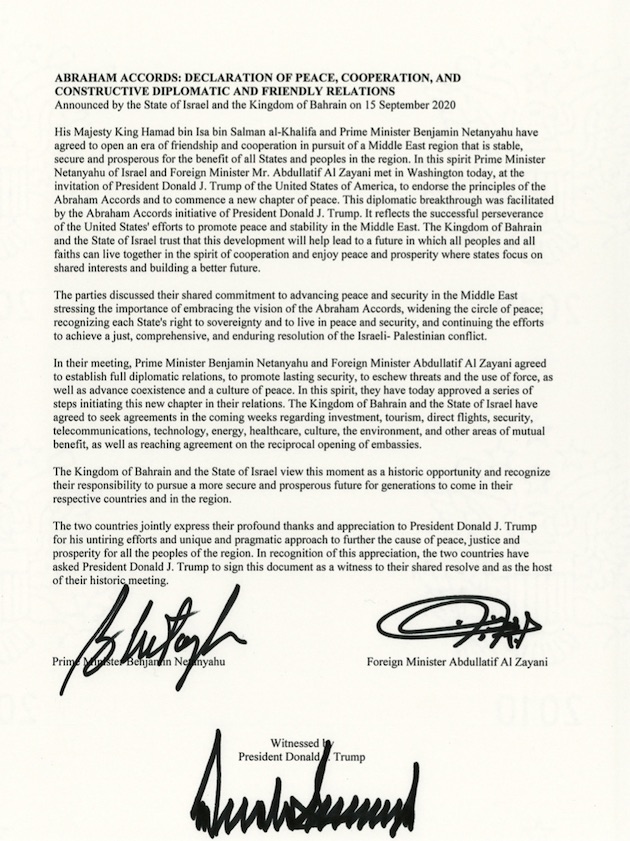 Bin Zayed: “A new trend that will create a better path for the Middle East”

The Minister of Foreign Affairs of the United Arab Emirates, Abdullah bin Zayed, underlined that “we are witnessing today, a new trend that will create a better path for the Middle East”.

“The accord will enable us to continue to stand by the Palestinian people and realize their hopes for an independent state within a stable and prosperous region”, he added, thanking Netanyahu “for choosing peace and for halting the annexation of Palestinian territories”.

Trump said he hopes five other countries can sign peace agrrements with Israel in the near future.

The two Gulf states become the third and fourth Middle Eastern countries to recognize Israel and establish formal diplomatic relations with the Jewish state, since Egypt did so in 1979 and Jordan in 1994, drastically redesigning the political map of the region. 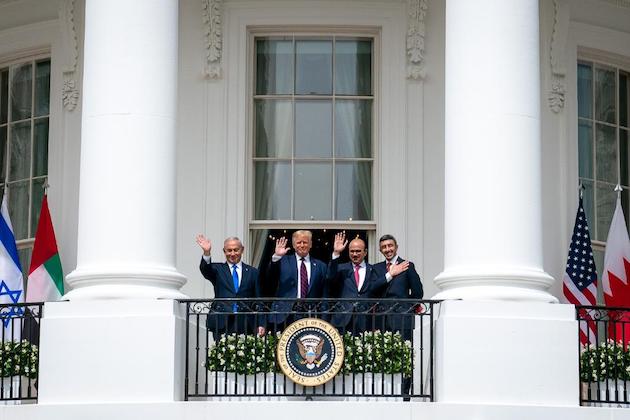 The signatores of the Accords

Palestinian leaders have reacted with outrage to the agreements, which were reached before a favorable resolution in their conflict with Israel could be found. Trump believes that the Palestinians would eventually join in the normalization of relations with Israel, or else they would be “abandoned”.

Emirates Minister of State for Foreign Affairs, Anwar Gargash, stated that his country's decision to normalize relations with Israel had “broken the psychological barrier” and is “the way to follow” for the region.

Several diplomatic sources have hinted that the Sultanate of Oman, which Netanyahu visited in 2018, would be the next country to announce a normalization agreement with Israel. The Omani leader spoke to Trump last week.

It also seems that Saudi Arabia, which allowed an Israeli and American delegation to cross its airspace in August for the first direct flight between Israel and the United Arab Emirates, might be considering a rapprochement with Israel, even though Saudi leaders have publicly said they are not yet ready for full normalization.

“Instead of focusing on past conflicts, people now focus on creating a vibrant future, filled with endless possibilities”, White House senior adviser Jared Kushner, who helped negotiate the deals, said.

Published in: Evangelical Focus - world - A new time of peace among the ‘children of Abraham’