Many evangelicals participated in the marches throughout the country. “We need a united Argentina, committed to human life”, the organisers said. 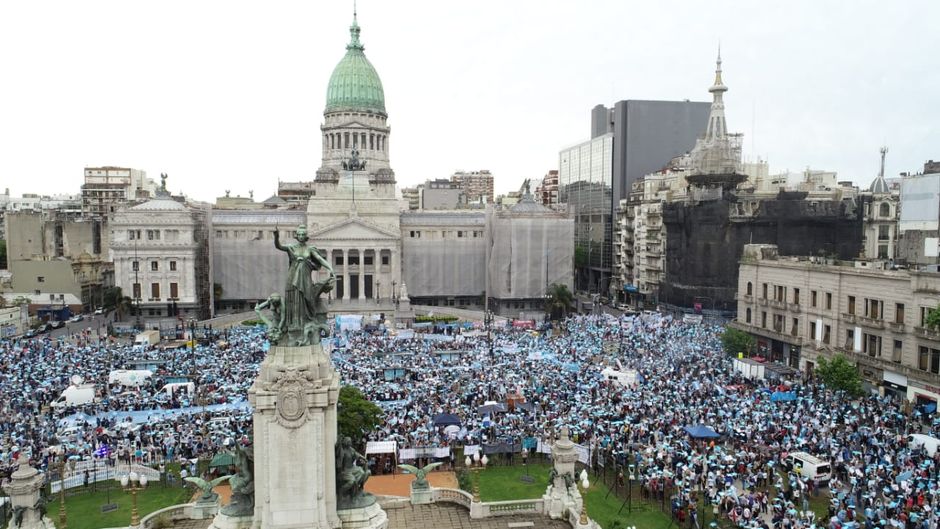 The pro-life activists managed to rally in front of the Congress. / Marcha Por La Vida twitter.

Thousands of pro-life protesters held marches and caravans in Buenos Aires and 500 other cities in Argentina on Saturday 28 November, to try to stop the draft law for the legalistion of abortion recently presented by President Alberto Fernandez.

“It is a spontaneous call in which we expect hundreds of thousands of people in the country who are in favor of the two lives”, said Pastor Jorge Gomez, executive director of the Christian Alliance of Evangelical Churches of Argentina (ACIERA), one of the organisations participating in the demonstrations.

Among the entities that motivated the marches were evangelical churches, the Catholic church, and Pro-life Unity, an organisation that includes more than 150 civil society organisations.

“We are taking the streets today to reject the abortion draft law that the national government is trying to put on the agenda to divide society and distract people”, former deputy Cynthia Hotton pointed out.

According to Hotton, “the president is hiding the failure of public health, poverty and the economy behind this initiative”.

Not the right time

For ACIERA this is “a repeated story”. They recalled that recent studies and surveys have clearly shown that more than 50% of citizens believe that this is not the right time to deal with the issue of abortion, to which they give less than 2% importance compared to issues such as insecurity, poverty or the pandemic, among others.

“The green pro-abortion scarf seems to be the only flag that remains for Alberto Fernández. It is truly the banner of a radical and bourgeois minority, more from the left-wing than from Peronism, which lives off the state and makes even Vice President Cristina Fernández uncomfortable”, Hotton stressed.

The former deputy believes that “perhaps it is also the agreement with some foreign ally that promises credit in exchange for installing in the country an industry that moves millions of dollars around the world. Fulfilling those promises means breaking everything”.

“We need a united Argentina, committed to human life”

The call for these marches started on social media under the motto “Let's save both lives” and with the hashtags “LaMayoriaAzulCeleste” (The Light-blue Majority) and “ConAbortoTodosSalimos” (With Abortion We All Go Out”).

Before the march, the organisers read two statements, harshly criticising the legislators and the national executive power. “We have come to say that we need a united Argentina, committed to human life in general and to the human life of the unborn in particular”.

Furthermore, they called on demonstrators to “denounce this inhumane, insensitive and criminal attempt. For this law not to be approved, we need to stand up against this serious injustice, to raise awareness of the situation and act accordingly”.

Despite persistent rain in Buenos Aires, the pro-life activists managed to rally in front of the Congress, where they denounced what they consider an encroachment on the majority. The main targets of the chants and slogans were the deputies and senators, who will soon decide on this draft law.

The marches and caravans also took place “in 500 other cities” in the country, according to the organisers.

In the city of Neuquén, an important crowd took the streets. Councilwoman Nadia Márquez was among them. “We are going through a difficult time, after eight months of a pandemic, with poverty and crisis, but Alberto Fernández's priority is to kill unborn children”, she denounced.

According to Márquez, the draft law “is inopportune because of the moment we are living in and because it was already discussed a short time ago. The Light-blue Majority in Argentina will once again express their rejection”.