We talk to Salvador Martí, a Christian police officer and creator of a safeguardind workshop for children. 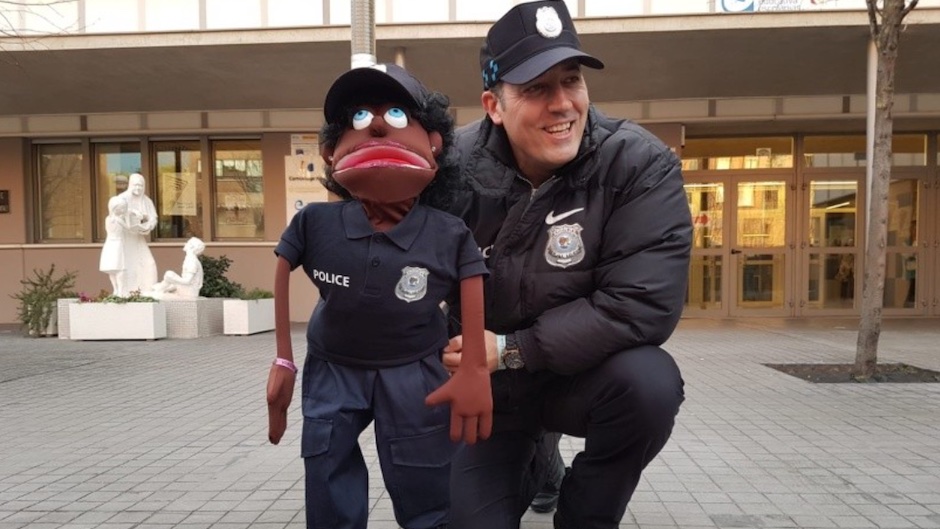 Salvador Martí is one of those people who does not draw attention to himself, nor does he pretend to, but who suddenly hits the media for a significant initiative.

He is a local policeman in Logroño, a city in the North of Spain, but above all he is a father.

Question. What led you to develop the “Alexia enséñanos” (Alexia teach us) programme?

Answer. What moved me to start the programme was thinking about the parents who have lost a child to a paedophile, a murderer. We have to do something so that this doesn't happen again!

Q. You did an experiment that shocked us all.

A. I developed a programme and consulted with a group of child psychologists. They loved it, but they missed the involvement of the parents, so that I started by proving to parents how easy it is to take a child out of a playground.

In my “predators” experiment I start by talking to a parent in a park, asking permission and making sure they are present following the test. Almost all of them agree and say they are confident that their child will not leave the part with a stranger because they have been taught well.

Then a person from the programme comes in and approaches the child and arouses his or her interest for whatever reason until he or she manages to gain the child's trust and take him or her by the hand.

Q. It is impressive to see some of the recordings. In only one case did a girl refuse to accompany the person who was taking her; the others did so in less than two minutes. One of the parents was in tears at the end of the test.

A. The parents then ask themselves where they have failed as a father or as a mother. Surely they have instructed their children many times, but the practical part is missing, showing situations by playing, in a safe environment in which children and parents actively participate. 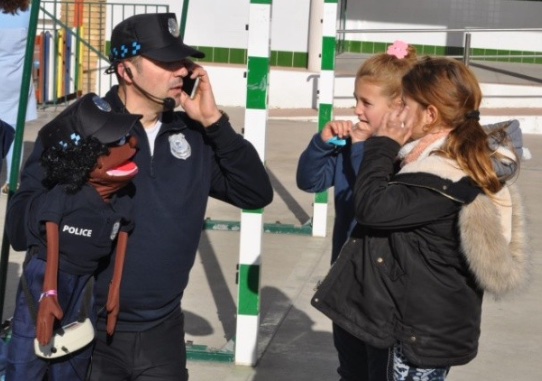 Children and parents are actively involved in the development of the programme. / Alexia Teach Us

Q. What is the programme about?

A. We developed four messages: 1. "I don't go off with a stranger" 2. "I know how to react when I stray from my mom/dad". 3. "Basic road safety". And 4. "Prevention of child sexual abuse". We didn't start with the latter, but parents asked for it. There was no programme like this one and I wish other partners would develop it elsewhere in the same way: non-profit and without ideological interests.

Q. How do you cover the costs of the project?

A. When I go to public schools, I pay almost everything out of my own pocket. I only ask for car gas or, if I am away for several days, for living expenses. I've just tried not to let it affect the family economy. God has provided.

(Salvador gets emotional and starts to open his heart to me: “Alexia Teach Us” helps to rescue children from danger, but also rescued him).

I became a believer at the age of 15, but I soon drifted away from living my faith as something purely religious. God rescued me like the prodigal son as I became vitally involved in the children aid programme. It definitely made my heart more sensitive.

Q. How did you start the programme?

A. I presented it to all the political groups in Logroño City Council (in the La Rioja region of Spain). They were all enthusiastic and supported it. And then, the party in the local government proposed that I do it from the city council, freeing up a few hours from my work. But they wanted to do it with their own brand. I refused, I didn't want that political party or any other to make a political profit.

The city council officials gave a press conference in which they fully supported the programme. But someone from the LGBTQI lobby read my personal opinions in a Facebook group (unrelated to the programme) about sexual ethics and attacked me and, even worse, attacked the programme.

Two days after the city council press conference, the same politician who had praised and supported me in public told me: “Salva, take that back, because I'm going to throw you into the lion's den”.

(What a paradox! I now recall that Salvador has been accused of political intentionality and indoctrination for his programme. Draw your own conclusions). 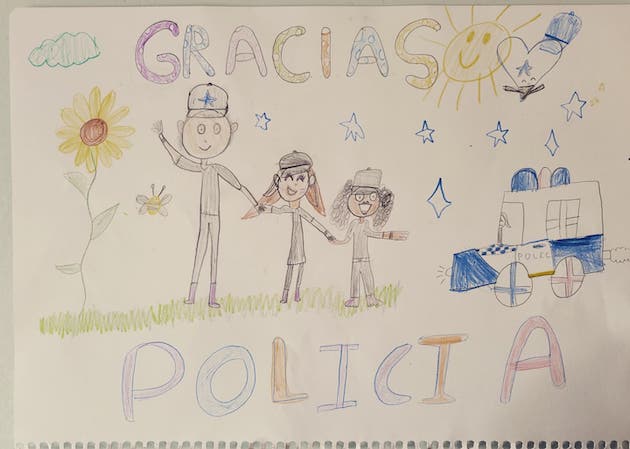 The drawing of a girl at the end of the programme. / Alexia Teach Us

Q. Do you introduce political or religious ideas into your workshops?

A. No. I have been very rigorous and have developed two perfectly differentiated programmes: the one we are mentioning and later another specific one for churches, “Defeating Konfu with the armour of God”.

In the first I deal with the issues I mentioned without touching on religious aspects and in the second I respond to what evangelical churches ask me to talk about in their specific environment.

Q. The president of the Logroño Psychologists Association has rejected the programme. She says that these protection programmes should be made by professionals. Don't you have professional training for the protection of people?

A. My own profession qualifies me to work on security issues, especially with children. But I also have a high level of training and I have the title of Protection of Public Figures from the Special Training Centre of the Spanish Armed Forces. I know what I am talking about and what I do.

The psychologist's statements shocked me. I would expect a psychologist to take the time to get to know a person before giving her opinion about them, and if she is going to give an opinion about a programme, she should first find out what the programme is about. How could she dare to speak without knowing me or the programme? And she did so at a time when the children of the village were terrified by the death of a boy.

This made parents doubt, which made the situation worse. But in the end, parents insisted on asking me to do a session of the programme and a hundred children with their parents came to the village square to participate. I was again supervised by psychologists. The declarations of that psychologist were very inopportune and created unnecessary tension.

Q. What are the results of the programme?

(Salvador stands up and shows me a set of thank-you plaques, letters, official writings... but the one that touches me most is a drawing of a little girl holding Salvador's hand and saying 'Thank you, police!')

A. In three years of work I have not had a single complaint. More than 2,000 children have been taught by "Alexia Teach Us" in more than 30 schools. Their feedback has been consistently very favourable. They often say: Alexia, come back! Parents and teachers have told me about children who, after participating in the programme, have been able to get out of dangerous situations.

And I learn a lot from the children. They are very open to talk to Alexia, and their reasoning is wonderful. 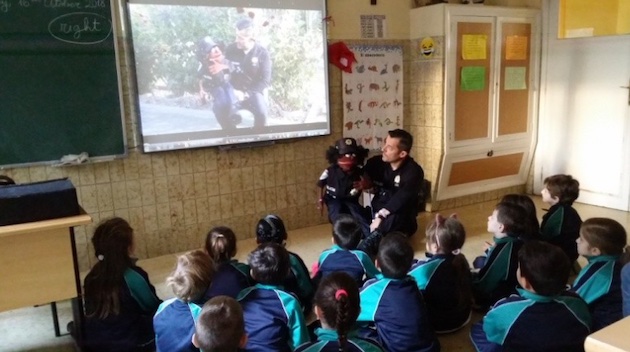 Salvador Martí visits the schools where they ask him to give training. / Alexia Teach Us

Q. And the parents?

A. Because I involve them very much in the programme, in an environment where everyone learns by playing, they react very positively. Some of them were sensitive because of the pressures and declarations I mentioned, but now that they know about the programme, they are asking me to extend it to all the schools.

Q. In your professional activity, what vulnerabilities do you find in children. What dangers do you see for which they are not prepared?

A. Children lack tools for the prevention of abuse. And many parents are not very committed to educating their children in values, and specifically in affective-sexual values. This is important and parents must be their first shield to protect them from exposure to the risk of abuse.

Q. Children are being insisted on sex education at school, and the stage of development of each child is not always respected.

A. I think sex education is key, but it should be done especially in the family and as the children ask, in a natural way, without forcing things. At school, there is a lot of insistence on the genital aspect of sexuality without paying adequate attention to the affective, personal and spiritual side of sexuality. And on the other hand, the issue of sexual diversity is persistently emphasised.

I believe that when a child is systematically taught to touch and play with his or her genitals, when an adult later proposes to play with it, he or she will see it as normal.

I also think it is a mistake to try to ideologise sex education. Protecting children from sexual abuse is a duty that must involve all of us without distinction of any kind, starting with the parents, who have the primary responsibility, something that the school must respect and it is not always doing so.

At the same time I encourage parents to get out of their comfort zone and indifference and check what kind of education is being given to their children at school in this area, to take care of this and to make sure it is consistent.

(When you look at Salvador, you know that what you see is what you get. He speaks with the confidence of someone who has no ties or servitude; that is why he doesn't hesitate. He does not seek benefits or special recognition, so that he is independent, and some people will not tolerate that. But I have no doubt that God has placed in his hand a task which he will carry through to the end for the benefit of all without distinction. If “Alexia Teach Us” saves just one child's life, it will be worth it).

Learn more about this initiative here. (in Spanish)

Published in: Evangelical Focus - cities - “Protecting children is a duty that must involve all of us without distinction”