The entire illustrated Bible, exhibited in the Luther House

An exhibition in the German town of Eisenach features the longest painted Bible on the 500th anniversary of the German translation of the Bible. 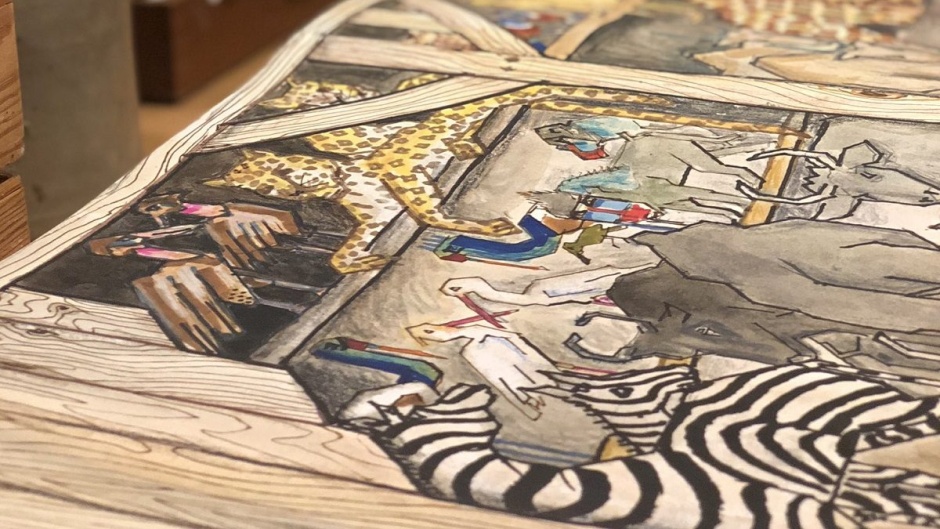 The Wiedmann Bible is the longest painted Bible in the world. / @danielleMGsmith

The Luther House in the German city of Eisenach, is hosting an exhibition of the reproduction of the Wiedmann Bible, the only painted Bible that completely reproduces the Old and New Testaments, from 5 May to 31 October.

The Wiedmann Bible was made by the artist Willy Wiedmann (1929-2013) and it is the longest painted Bible in the world. It consists of 3,333 pictures that he painted over 16 years.

The reproduction of the original on display at Eisenach is the result of the cooperation between the German Bible Society and the designer Manfred Rieker. The edition includes commentaries, a biography of the artist, and Bible verses from the revised 2017 Luther Bible.

Under the title “Eisenacher Pilgerbibel: Die längste Bibel der Welt” (Eisenach Pilgrims' Bible: The Longest Bible in the World), the 1.7-kilometre-long interactive exhibition presented the 3,333 illustrations of biblical stories on 331 panels displayed along a trail leading to the Wartburg Castle.

Each picture has a QR code that visitors can scan to hear the corresponding Bible verses in German, Spanish, and English.

Katja Wolf, the Mayor of Eisenach attended the inauguration of the exhibition. “Wiedmann translated the stories of the Bible into pictures. The presentation is a great symbiosis of nature and culture at an historic site. With his work, Wiedmann wanted to make the Bible accessible to all people, regardless of what language they speak”, said Wolf.

Tthe 1.7-kilometre-long interactive exhibition presented the 3,333 illustrations of biblical stories on 331 panels displayed along a trail leading to the Wartburg Castle. / Eisenach startseite

This edition of the of the Wiedmann Bible joins the collection of Bibles dating from the 17th to the 21st century in the Eisenach museum.

500th anniversary of the German translation of the Bible

The half-timbered Luther House is a memorial to the Reformation and was the home of Martin Luther during his school years between 1498 and 1501. This year, 2022, marks the 500th anniversary of the German translation of the Bible by the reformer.

On 4 May 1521, Luther was abducted near Eisenach on his way back from the Diet of Worms. Elector Frederick the Wise had Luther, who had been banned by the Diet and declared outlawed, taken to Wartburg Castle for protection. There he translated the New Testament from Greek into German in eleven weeks.