In Madrid, Nick Vujicic encourages young people to “not give up”

He spoke to over 3,000 schoolchildren about his own personal experience and the need to stop bullying. His visit to Spain was followed by the media. 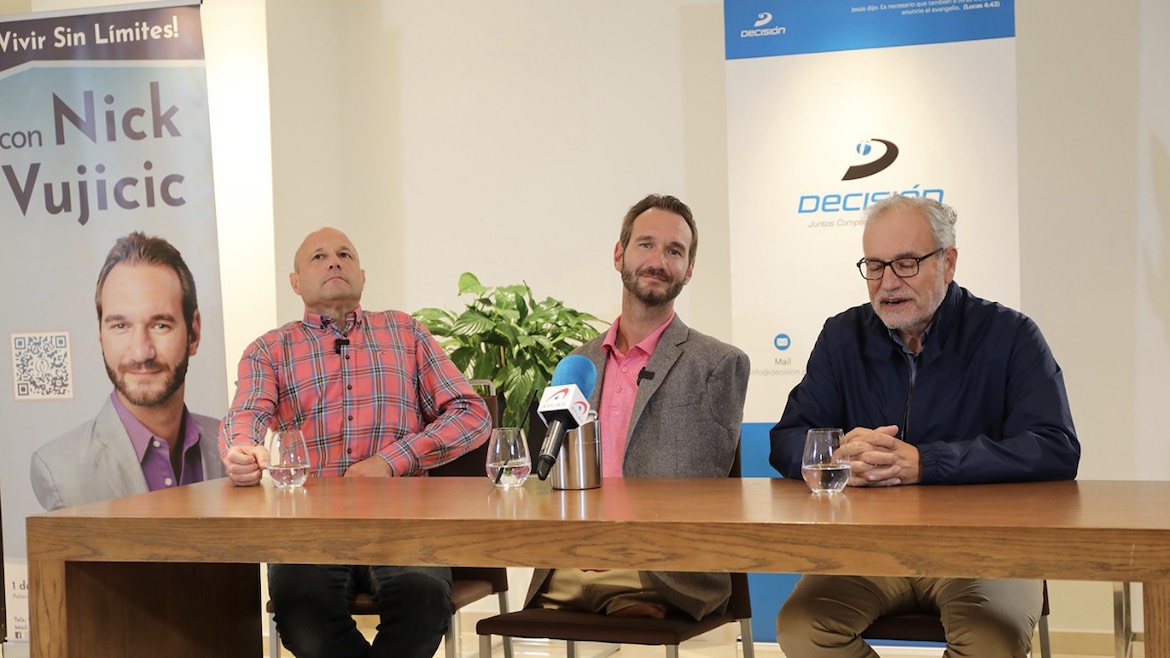 Nick Vujicic, in a press conference in Madrid on 30 September. / Photo: Actualidad Evangélica.

On 30 September, a press conference with Nick Vujicic took place in Madrid (Spain), which lasted for two hours due to the interest in listening to the charismatic visitor, who responded generously to every question.

“If just one person who is about to give up, especially because of the impact of the pandemic and bullying, says: I heard Nick say I'm wonderful, don’t give up... he didn’t give up, I won’t give up... that’s more than I could ask for from this visit to Spain”, said Vujicic speaking to the media at the Hotel Meliá Princesa.

Nick’s message, rooted in his personal experience and his Christian faith, moves, convinces and challenges people of all ages and all beliefs “not to give up, not to let a negative opinion of your worth define you, to overcome your limits by focusing on what you can do”.

National media broadcasters such as Telecinco featured Vujicic's visit to Spain in their news shows.

These and other words were heard earlier that morning by the 1,300 primary and secondary school pupils from Villanueva del Pardillo (Madrid) who gathered in the auditorium of the Vallmont School, accompanied by the mayor of the municipality, 75 teachers, and fifty education professionals.

“When I met my wife for the first time.... My legs were shaking”, Nick said with amusement, and the 1,400 schoolchildren, teachers and authorities who filled the large auditorium of the Vallmont School laugh with him. By then, hardly anyone noticed that his arms and legs are missing. Nick does not inspire pity, but admiration. 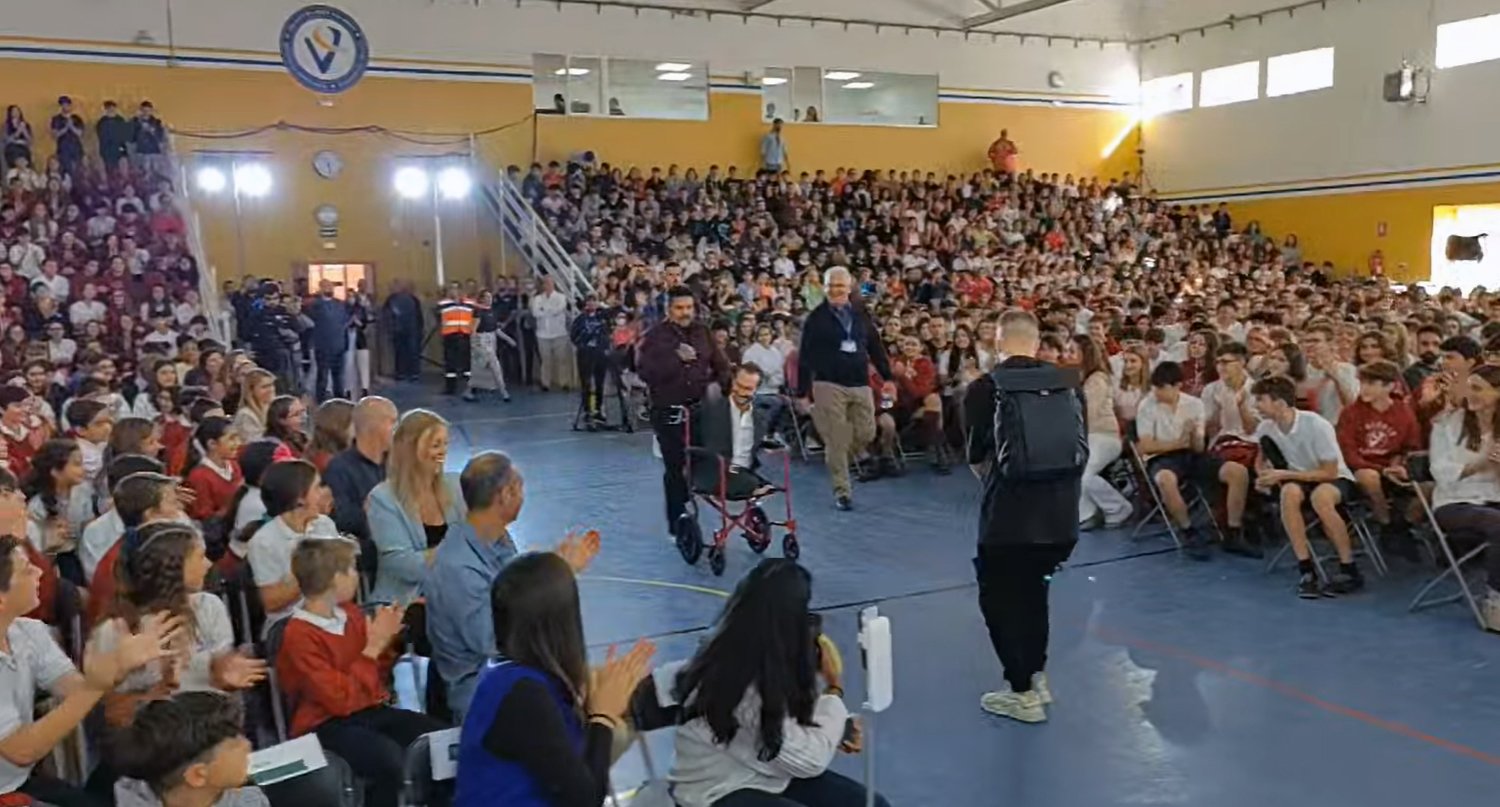 And between jokes (always laughing at himself, which is the highest level of humour), his heart lights up and his powerful voice rises to underline powerful ideas that he wants people to remember.

“One day at a time, with God I can do all things”

“Some people might not want to be your friend because you’re not good enough for them, but you know what, they’re missing out on a really good friendship!”, he says. “You're wonderful just the way you are!”.

“When I was 10 years old I wanted to take my own life”, he explains. “I thought, what future do I have in life if I can't do anything for myself? Who’s going to want to marry me? How am I going to have a child I can’t hold in my arms”, he confesses.

“But you know what? One day you grow up, and you get married, and you have a family, and you realise that the people you love most need you not to hold their arms, but their hearts”.

Nick, married to a Mexican-Japanese and father of four, is enthusiastic about his family. “When I saw my wife the first time, it was love at first sight! I hope I can come with her to Spain and get to know your beautiful country better”, he says, and the audience bursts into applause.

Nick also reveals the secret of his overcoming his body’s limitations: “One day at a time, with God I can do it all”, he says, and clarifies: “I think faith is very important. I respect and talk to people of all religions, but in my case what has helped me is my faith in God [in Jesus Christ]”.

The mayor of Valdemorillo, Eduardo Fernández, privately received Nick and the Nick Vujicic Spain 2022 European Tour team, minutes before the conference. The Mayor formally welcomed Nick for his visit, the organising team for agreeing to hold the #Stopbullying conference in his municipality, and the authorities of Vallmont School for their full collaboration and welcome, providing the facilities of their large auditorium for the event.

Nick told the mayor that his organisation, Life Without Limbs, wishes in the future to promote its work and take these anti-bullying conferences to other cities in Spain, Europe and other countries.

“I think it is a great proposal and I am committed, as mayor, to take it to the Assembly of Madrid so that the Community welcomes and supports it, because I am convinced that this message against bullying must be heard in the schools of our country”.

At the end of the conference, mayor Fernández, visibly moved, thanked Nick for his visit and confessed that he too had been bullied as a child. “Thanks to God and the help of my people I overcame it, and against the prediction of many, today I am mayor of the municipality where I was born, and where my parents and grandparents are from”, Fernández said.

The mayor was not the only one excited. The impact of Nick’s lecture created a solemn atmosphere. As teachers and monitors broke up the crowd, children could be seen hugging each other. Some apologising, as Nick had suggested they do, if they felt they had to.

Massive events on tv and screened to churches

This was the first of the #Stopbullying talks Nick gave during his weekend in Spain. The other took place at the Congress Palace of Madrid (IFEMA) on Saturday morning, with another 1,800 students, teachers and monitors, which had already filled its capacity as well.

Tickets for these activities are completely free of charge. The organisational costs are covered by donations from sponsors, companies and individuals who support the event, and partly also by the sale of tickets for the conference "Living without limits" that Nick gave on Saturday evening at the IFEMA Conference Centre in Madrid.

Saturday's talks were followed from several cities in Spain via the internet. More than 500 organisations, schools and churches were connected to screen the talks live in auditoriums or assembly halls for local audiences, which is expected to multiply the impact of the talks throughout the country.

Evangelical Focus will publish a summary of the last conference in another news article.

Nick, an inspiring example for thousands 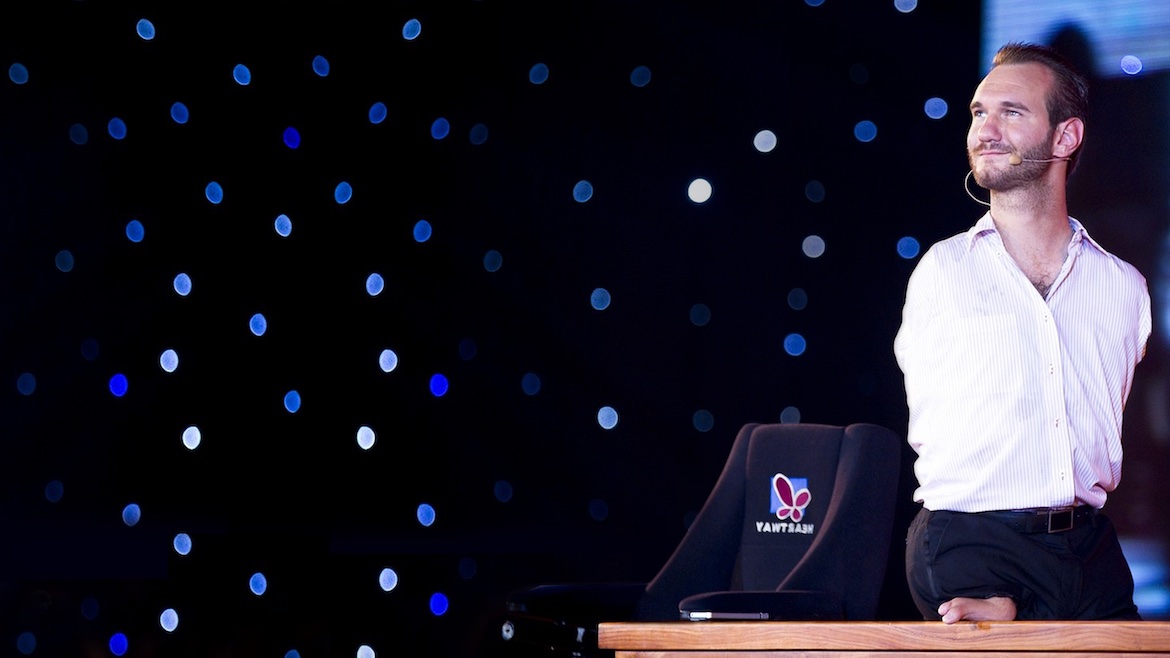 Born in Australia in 1982, without arms or legs (tetra-amelia syndrome), Nick Vujicic was bullied as a child and in desperation, between the ages of 8 and 10, attempted suicide.

However, in a process of extraordinary personal transformation, Nick Vujicic has become an example of self-improvement who today inspires the world with his testimony and his will to live. His lectures in countries on five continents draw crowds to hear him, to see him and, many, to receive his unique embrace.

Nick Vujicic brings a message of hope that we believe is very timely for this post-pandemic time and its worrying effects on people's mental health, especially among the youth. A powerful message that will be of help to anyone who is suffering from physical or emotional disability, disillusionment, emptiness and lack of purpose in life.

Vujicic, a Christian, always shares about the hope of the gospel in his talks.

Published in: Evangelical Focus - cities - In Madrid, Nick Vujicic encourages young people to “not give up”