“The goal is not only to sing, but to tell what God has done in our lives”, says the director of the Choir of the Reformation of Galicia, one of several groups touring in Spanish regions this year. 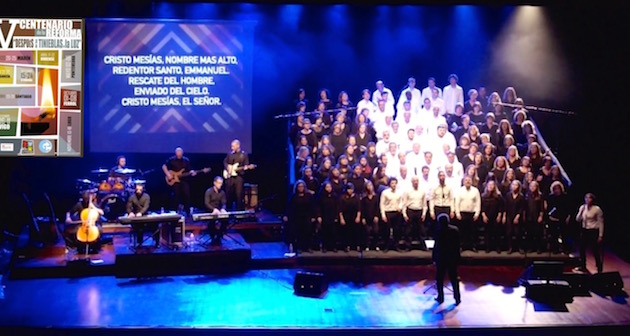 The Choir of the Reformation in Galicia, Spain.

The 500th anniversary of the Reformation continues to be celebrated throughout the world with very thousands of activities.

Last weekend, the evangelical churches of Galicia, in northern Spain, organised a traveling exhibition of Bibles, a series of conferences, and a concert by the Choir of the Reformation, which took place ths Sunday in the city of A Coruña.

The choir is composed of 118 voices and six musicians from several evangelical churches, a remarkable effort for the small churches in the region.

“This is a very special year that we can use to share the message of Jesus and the salvation that is found in Him”, explains Jonathan Recamán, one of the coordinators of the concert and Evangelical Pastor of the Church of the Brethren of Pontevedra.

The Choir has been specially formed for this concert tour in 2017.

LYRICS WITH A MEANING

“There are songs that highlight giving glory to God for his salvation, others that exalt the grace of God, others that emphasize Jesus as the only mediator between God and men, and others that underline salvation only by faith. Everything comes from the Word of God”, explains Jonathan Recamán.

The director of the choir is Emilio Lagos, who has extensive experience directing choirs, although he does not always have the opportunity to direct almost 120 voices. It is remarkable that there are up to three generations in the choir.

It is an excellent experience, very beautiful”, says the director, who believes that this intergenerational experience also connects with a very wide audience.

Some of the songs are sung in evangelical churches, which have always given importance to congregational singing and the music as a way to express their doctrines.

“As a church, it helps us to praise God. Though the songs, many people can say the same thing at the same time”, Recamán points out.

That is why he believes that these songs stand out not only for their musical beauty, but also for “their precious message of hope, because despite our sin, God shows his grace by sending his Son to die in our place. This is something that people need to hear”, he says.

Another positive point is the collaboration between the participants: “it is beautiful to see brothers and sisters from different churches who have joined this project, which involves much more than the nine concerts”.

Hours of rehearsal, trips, and the challenge of clearing agendas that are often very loaded ... “but with a good attitude, knowing that the purpose is to preach Christ”, comments Jonathan Recamán.

“The goal is not only to sing, but to tell what God has done in our lives”, concludes Emilio Lagos.