The windows of the store were full of anti-Christian offensive graffiti. “This is an attack on religious freedom, are we still free to believe in God in France?”, the CNEF says. 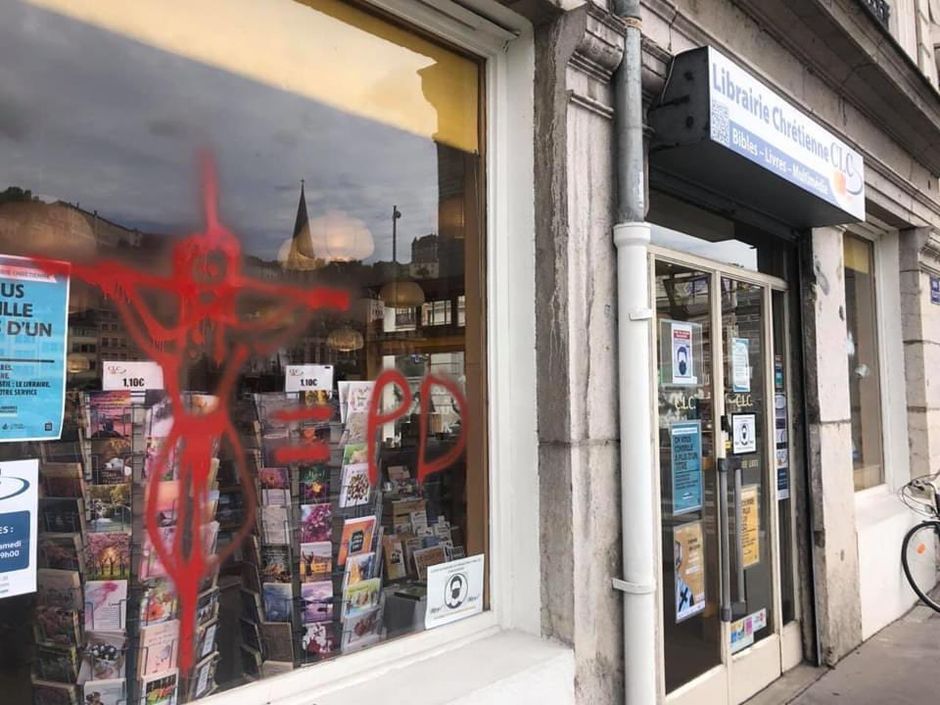 The windows of the store were full of anti-Christian offensive graffiti. / @comcnef.

The Christian bookstore CLC located in the French city of Lyon, was attacked last Saturday. The staff of the store found all the windows with anti-Christian graffiti.

The paintings said very offensive things, such as “Christianity is a successful sect”, “Up there, God does not exist”, or the drawing of Christ tagged on a Christian cross, followed by an insult, all drawn in red or white ink.

Although vandalism “is recurring, we have them every month”, this time “it surprised me because there are some on all the windows. The police came by to take pictures. There are two video surveillance cameras on the public road, it happened overnight”, the manager of the bookstore told local newspaper Le Progrès.

“This targets Catholics as well as at other branches of Christianity. In fact, we all are targeted […]. We live with it, but here it goes beyond the limits”, he added.

Isabelle Marczak, assistant to the general manager of the CLC group, who was in Lyon when the attack took place, pointed out that it was “shocking to see this in France, religious freedom is something quite strong in France”.

“It is important to respect each other's convictions. Here we mix everything up. There are attacks on the faith, a bit of a homophobic inscription too… it's aggressive”, she underlined.

CNEF: “Are we still free to believe in God in France?”

The director of communications of the National Council of Evangelicals of France (CNEF), Romain Choisnet said on twitter that “this is an attack on freedom of religion: are we still free to believe in God in France? Will the Minister of the Interior react as he reacted to the attempted fire at a mosque a few days ago?”.

The CNEF explained that “faced with the proliferation of anti-religious acts, a group of inter-religious leaders in Lyon, called the G9, is considering a right of reply in the form of a forum to appear soon in a major national media”.

“The objective is clear: to denounce these acts and call on the public authorities to be vigilant”, Erwan Cloarec, pastor of the Evangelical Baptist Church of Lyon and one of the participants of the G9 group, stressed.

This G9 is made up of seven Christian leaders and two others of the Jewish and Muslim faith.

The Prefect of the region, Pascal Mailhos, “strongly condemns the anti-Christian tags discovered this night at Lyon quai Tilsitt. He sends all his support to the Christian community”, on the Twitter account of the Rhône prefecture on Saturday.

The mayor of Lyon, Grégory Doucet, also denouned the attack on Twitter, stating that “tolerance is a value that we will defend at all costs. All my support for the Christian community”.

Meanwhile, Azzedine Gaci, rector of the mosque of Villeurbanne, tweeted that he “strongly condemns this despicable act and hopes that the perpetrators will be found and brought to justice. All my support for the bookstore”.

In addition to this attack, two mosques in the metropolis of Lyon were the target of arson in August; anti-semitic tags were discovered in the 5th arrondissement of Lyon; and the new mayor of Givors, Mohamed Boudjellabade, received on August 21, an anonymous letter containing racist insults and death threats.