Madrid hosts an exhibition of 1,600 Bibles

“The Bible, a journey through the languages of the world” shows how “Western civilization is built upon Christianity, and its foundations are the Bible”, collector Pere Roquet says. 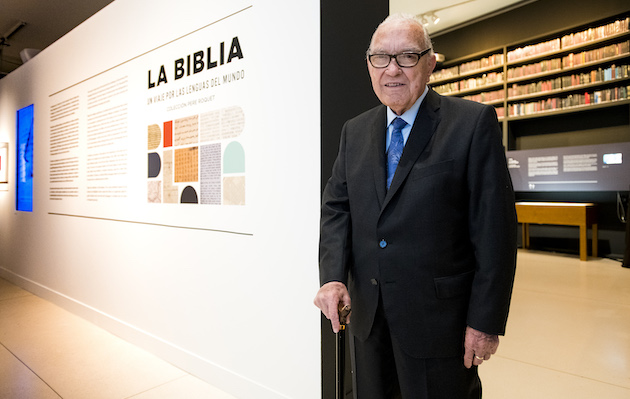 From June 27 to September 1, CaixaForum, one of the biggest cultural centers of Madrid, hosts a free exhibition of Bibles called “The Bible, a journey through the languages of the world”, with 1,600 copies from more than 170 different countries.

Beyond its religious significance, the collection shows the world's linguistic diversity and the importance of the Bible for the conservation of these languages.

Some copies are the only text written in that language, and there are even dead languages which also have their Bible.

The Andorran collector Pere Roquet started his great collection in 1995. That year, Roquet visited the town of Lokori, in Kenya. There, Father Franco Moretti, a Comboni missionary, gave him a New Testament written in Turkana, an Eastern Nilotic language spoken by almost one million people.

He then began this work that, over almost twenty-five years, has led him to gather copies of the Bible in more than 1,900 different languages (a total of 1,593 volumes). 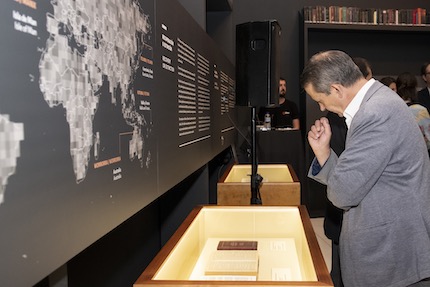 “THE FOUNDATION OF WESTERN CIVILIZATION”

The exhibition highlights the stories that are hidden behind the languages in which they are written.

Furthermore, it is complemented with six audiovisual pieces, including a big map of the world's languages, two videos by the translator and linguist Gabriel López Guix and another with statements by Pere Roquet himself.

Roquet, who is a Roman Catholic, explains in an interview in Spanish newspaper La Vanguardia that biblical translation has been promoted mainly by Protestants in the last 500 years.

“Western civilization is built upon Christianity, and its foundations are the Bible”, says Roquet, who considers the teaching of Jesus “revolutionary”. 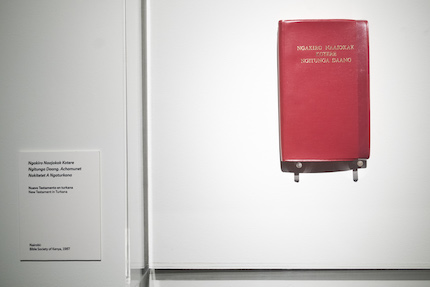 “It dignified women, the sick, the poor. And that has greatly improved the world, through its translation into so many languages”, explains the collector.

Roquet points out that “the Bible is sometimes the only printed record that a language has. That it is how it stays, even if the language is extinguished. For 35% of these 1,900 languages, the Bible is their only book”.

THE MOST TRANSLATED AND PUBLISHED BOOK OF THE WORLD

The Bible has been translated into 3,350 of the 7,111 languages in the world. It is an amazing figure if we take into account that 3.116 of these languages do not have writing.

It is estimated that more than 6,000 million copies of the Bible have been published, which makes it the most published book in history. And this continues, because it is also estimated that 100 million Bibles are sold every year worldwide.

The exhibition starts with the Bible that began the collection in 1995, along with some Bibles that bring us to the original languages: Hebrew and Greek. 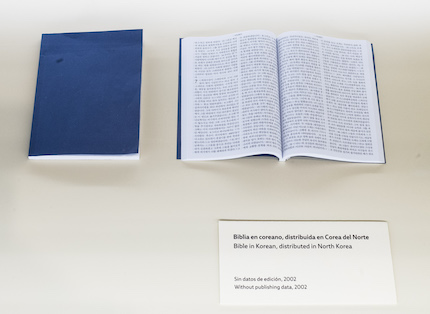 There is a copy of the so-called Septuagint Bible, the Greek translation that was used later by the first Christians, from which come almost all the quotations from the Old Testament present in the New Testament.

Another of the expo showcases has Bibles of global reach, such as a Bible in Esperanto; Bibles of isolated communities, like the Pennsylvania German Bible, a high Germanic variety spoken by the Amish and Mennonite Protestant communities in the northeast of the United States and in Canada.

Other Bibles allow us to know what it means to read the sacred texts in hiding.

There is a copy of a North Korean Bible, where Christianity is persecuted. In this country, owning a Bible leads to death penalty, but some individuals manage to reach the country from neighboring South Korea tied in balloons equipped with GPS devices. 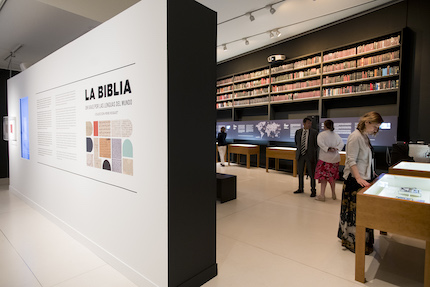 These books are small and light to facilitate their transport and have no title on the cover to go unnoticed.

There are also Bibles written in minority languages, extinct or endangered (especially in the Pacific or sub-Saharan Africa), for example in the Yagan language, which currently has only one native speaker alive, Cristina Calderón, 91.

Two Bibles in Manx, the Celtic language of the Isle of Man (Irish Sea), and in Itelmen - the language of the Russian Kamchatka peninsula-, are examples of languages practically extinct but with hopes of revitalization, thanks to the efforts that are being carried out, especially in the field of schooling.

The exhibition has also a place for disabilty, with sign language and Braille Bibles; and the new technological formats, languages and narrative forms, with comic, Japanese manga and the Minecraft videogame Bibles.