In all we do as Christians in Nepal we must now not be afraid but act wisely. 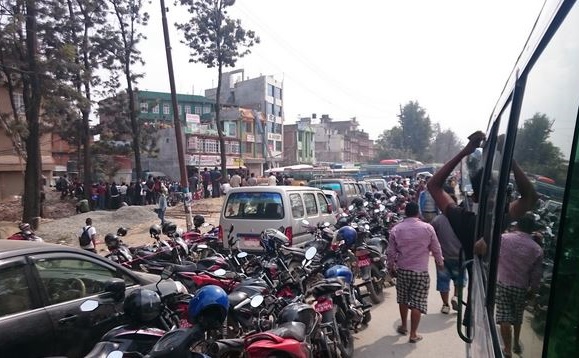 This week amendments to the constitution of Nepal restricting freedom of religion come fully into law. All minority religions in Nepal are anxiously waiting to see what this means for them.

Back in 2015, the long awaited constitution of Nepal was finally completed and taken into law. I remember well the Christian pastors telling me how pleased they were that Nepal was now officially a “secular country with freedom of religion”. Then came the blockade! India’s Hindu government exerted its might against it’s Nepali neighbours move away from its former Hindu kingdom roots and blocked the border. In Kathmandu queues of traffic sat waiting for the rationed fuel for literally days. The shop shelves started to empty, gas ran out and many places simply closed down. It lasted several months and then something happened to end it all.

What happened? And what perplexes me is how we went from Christian pastors celebrating to something quite different today?  Well I guess we will never know fully but the changes in the constitution give us a pretty clear indication as to what was going on behind the scenes to diffuse the tensions. Nepal’s constitution has since been amended and now stipulates that; ‘Sanatana Dharma’ (Hindu faith) will be protected by the state. What does that mean? And how can that be achieved? Well there are some clues as to the intentions and meaning in Article 26 (3):

“No person shall, in the exercise of the right conferred by this Article, do, or cause to be done, any act which may be contrary to public health, decency and morality or breach public peace, or convert another person from one religion to another or any act or conduct that may jeopardize other’s religion and such act shall be punishable by law.”

The penalty for breaking the above law has been set as five years jail time and a 50,000-rupee fine so it’s not without excuse that all the minority religions here are nervous. I can find no news reports about any other religious minorities other than Christians being affected by this law as yet but with such broad powers and a huge majority the current government can almost act with impunity. And if the widely reported recent case of two Christian pastors being thrown out of Nepal for being pastors whilst on a business visa several weeks ago was a warning shot being fired by the government then it carried a pretty blunt message. Previous to this case, back in 2016 there was another case of eight people being detained for seven days after leaving christian materials at a school. They were later released but again the message is coming loud and clear.

So what can we expect in the coming days, months and years? Time will tell but in the meantime there are things we must do to protect ourselves and Biblically we are commanded to not be anxious but to pray (Philipians 4:6). So the first thing we should be doing is praying and casting all our cares on the one who cares for us more than he cares for the sparrows (Matthew 10:29-31). And we must pray for the government for whether we agree with their laws or not the Bible says that they are established by God to rule Nepal at this time (Romans 13:1-7). It is also worth noting that this Romans 13 scripture calls us as Christians to act with complete integrity. And we should pray for favour, pray for restraint BUT also perhaps most importantly we should be praying for boldness, as the first church did when their leaders were being crucified and imprisoned (Acts 4:23-31).

In all we do as Christian in Nepal we must now not be afraid but act wisely. How is it possible to proceed with baptising people and to continue to spread the gospel in this land? Love is the centre of our message and I believe we should focus on acts of love. Legend has it that St Francis of Assisi sent out his disciples with the words; “Preach the Gospel at all times. When necessary, use words.” In this land however I believe that love needs to combined with a clear message. The wisdom we need is to develop strategies to be able to prove that no one was coerced into accepting Christ or being baptised. After all I don’t believe it is possible for anyone to truly convert someone else from from one religion to another. However to stay within the law a church I know of has included into their service that when anyone accepts Christ it is formalised before the whole church and recorded on camera with the person concerned confessing that their acceptance of Christ and conversion has all be completely by their own decision. This may or may not work we will see but for sure we need wisdom.

And so if you reading this from another land please join the Christians in Nepal and Pray for wisdom, integrity, peace and boldness.