Representatives of three political parties joined the conversation with the Spanish Evangelical Alliance for the public event that opens the annual Idea conference. 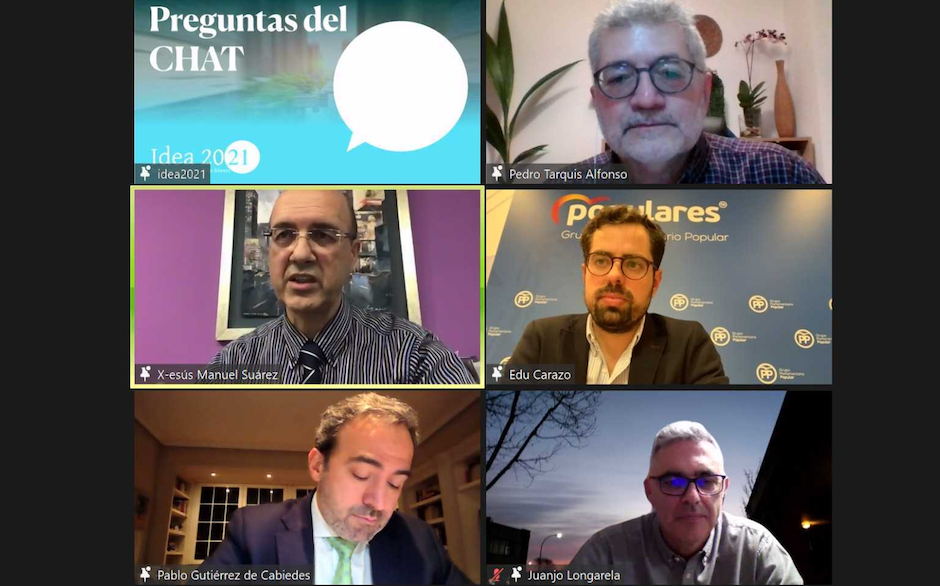 This time the event was held online and the theme was “Freedom of conscience and the limits of the law”.

The event started with reflections about the importance of the religious presence in society. Suárez spoke about the Protestant influence on the separation of State and Church for the benefit of the population. “For Protestants, understanding the limits of the law is a fundamental issue. Historically, we offered solid foundations for its sound development. Spain needs to read the Bible again. Protestantism emphasised the necessity of regenerating the control over power. Freedom of conscience emerged in countries with a Protestant majority”, he said.

Secularism and freedom of belief

One of the issues most addressed by the participants was the relationship between the separation of powers in society and the right of freedom of belief. Carazo argued that “people have to be protected in their moral sphere” and that it is important to understand that “law and freedom do not oppose but complement each other”.

The People’s Party representative added: “In Spain we are pendular, we go from a confessional state [like in the Franco Catholic dictatorship] to a desire now to eliminate religion. We should not forget that one of the contributions to the concept of humanity comes from Christianity and the message of the gospel, that is, that all persons have inherent dignity”, the parliamentarian said, after the evangelical leader differentiated between laicidad (a separation of church and power) and laicismo (aggressive secularism), a “belief that is often promoted from power nowadays”.

For Gutiérrez de Cabiedes, “in Spain we are experiencing a key moment for culture and our civilisation because we are in a situation that threatens the free expression of values such as those of Christians”, adding that “the State should facilitate the religious education and assistance because the religious fact is a good for society, as long as it does not attack the wellbeing of culture”.

The representative of the Social Democrats, Juan José Longerela, introduced the concept of “positive secularism” and underlined the necessity of making sure faith groups have a space in the public square.

In the name of the Evangelical Alliance, Suárez offered the three parties represented the proposal of creating a working group about religious liberties in Spain, formed by both political representatives and members of the civil society. “It would be in everyone's interest that our democracy promotes the free contribution of all areas of freedom of conscience. There is no democracy without freedom of conscience”, he added.

Left, right and the legislation about religious freedom

The secretary general of the Spanish Evangelical Alliance asked a series of questions to the other participants about the growing political polarisation in the country. “If we all agree in the common denominator of religious freedom, why does it end up being tinted by the left-right axis? When will we free religious freedom from the cliché attached by both the left and the right?”, Suárez asked.

Longarela said he did not believe “that anyone on the right or on the left is against religious freedom”. Carazo added that he sees “a link between totalitarianism and absence of religious freedom” and added that “we have to be defenders of the democratic system, the best place in which we can live out our faith”.

Meanwhile, Gutiérrez de Cabiedes admitted that there are political tensions and argued that “the actions of the government [lead in Spain by the Social Democrats PSOE and Leftists of Podemos] are a frontal attack against religious freedom”. He pointed to the latest Education Law and added that “the parental pin is a success of the right to objection from the citizen’s freedom of conscience”.

Another issue that came up in the 90 minutes long conversation was the censoring of certain discourses on social media. Carazo pointed out that “the limits of freedom of expressions are set by the Penal Code and not by a social network, which, in the end, is just a business”. He lamented that “the public agora ends up belonging to private companies”.

The perspective of an upcoming Law of Conscience

As the online event developed, the over 160 people following the debate were able to ask questions to the participants. One was about what they thought of an expected from draft law about freedom of conscience that would substitute Spain’s Freedom of Religion Law.

Longarela, member of the Social Democrats, said it would be “very positive” because it would “allow to speak with equidistance and change the relations between the State and the different faith confessions”. “We should overcome certain inertias which in practice favour certain faith groups over others”, and clarified: “At a certain point we should change the law so that the Roman Catholic Church is not preponderant in the law”.

Carazo, representing the conservative opposition, said he “fears” that “a new freedom of conscience law hides the fact that it is trying to push aside religious freedom”. He defended the coexistence of both laws. Gutiérrez de Cabiedes spoke of the  value of the current law and said he could find “no reason to change the first organic law to be approved in the Spanish democracy”.

The event ended with a short reflection on Proverbs 29:2 (“When the righteous increase, the people rejoice, but when the wicked rule, the people groan”) by Marcos Zapata, president of the Spanish Evangelical Alliance. He prayed for the four participants, for politicians in general, and for all of society in these difficult times, asking God to act.

Representatives of the two other major Spanish political parties, Podemos (Leftists) and Ciudadanos (Centre-Liberals) did not respond to the invitation of the Spanish Evangelical Alliance.

Published in: Evangelical Focus - europe - “If there is no freedom of conscience, there is no democracy”