“We have a responsibility to prevent, to react and to set an example in whatever we can do”, the CNEF says. Since 2019, eleven cases in evangelical churches have been reported.

A working group of the National Council of Evangelicals in France (CNEF) created by the former president Étienne Lhermenault in 2019 to fight against sexual abuse, presented its conclusions on Tuesday 1 June to the entity plenary.

A guide, a charter of commitment and the creation of a helpline were approved by a near majority of the members of the plenary assembly, by 78 positive votes out of 79.

The 44-page Guide of good practices to fight against sexual abuse  is described by its authors as a “code of ethics in the service of the most vulnerable in the CNEF's member churches and organisations”.

The document is aimed at pastors, church leaders and lay people in positions of responsibility and it aims to give them tools “so that communities remain caring, welcoming places where people can be safe”, explained Marc Deroeux, Vice President of the CNEF.

The guide provides theological, legal and practical advice related to accompaniment and care and answers questions regarding discipline and professional secrecy. It also goes into the possible penal, disciplinary or communication actions to be taken if a case is denounced. 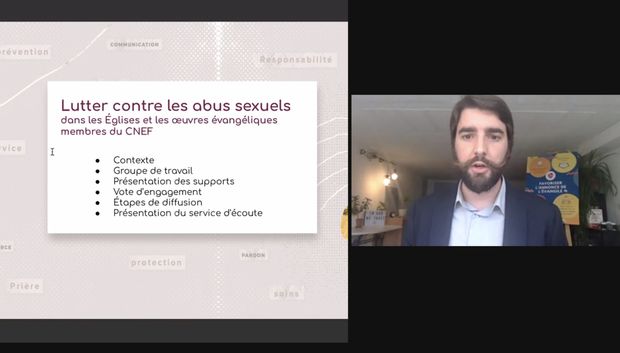 CNEF: “We have a responsibility to prevent, to react and to set an example”

“The #metoo movement and the latest revelations of sexual abuse and abuse of all kinds in our society - whether in sport or fashion - have challenged us. They are not new, but it was important for us not to ignore them. We have a responsibility to prevent, to react and to set an example in whatever we can do within the CNEF”, pointed out Deroeux.

The CNEF stated that “it is important to warn about this behaviour, which can be abusive and affect children and people in a fragile state. Sexual abuse is an abuse of power that is not in accordance with the gospel, for which we are responsible and for which we want to remain exemplary”.

The evangelical entity deplores the fact that such sexual abuses can exist within evangelical circles, “it dishonours the witness of Jesus Christ”.

Since 2019, the legal department of the CNEF has received eleven reports of sexual abuse, three of which were allegedly committed by church leaders. One was an external complaint that has not been tried, while the others were reported by church leaders who submitted a referral. Eight of them sought legal advice and three cases involved minors.

A helpline is also expected to be set up in the next few months with a website providing resources and an online form to support victims. Victims can be redirected to specific professionals and experts as appropriate.

Furthermore, the charter of commitment and prevention posters will soon be sent to the 32 church denominations and 162 national associations of the CNEF, as “an important tool, in terms of prevention and action”.