Under police protection, 1,000 march for life in Zürich

The 12th March for Life in Switzerland had a festive mood, with live music, testimonies, and a call to implement a 24 hours period of reflection before performing an abortion.

Around 1,000 participants joined on Saturday 17 September the Swiss March For Life, in the Zürich district of Oerlikon.

The theme, “24 hours for life”, pointed to their demand that a one-day period is introduced in Switzerland for women asking for an abortion to think about alternatives to putting an end to the pregnancy.

Under strict police protection (including officers on the street and a helicopter watching the event from the air), the hundreds marched with colorful balloons and banners in a walk through Oerlikons’ streets which ended in the market square where the scenario had been set up. 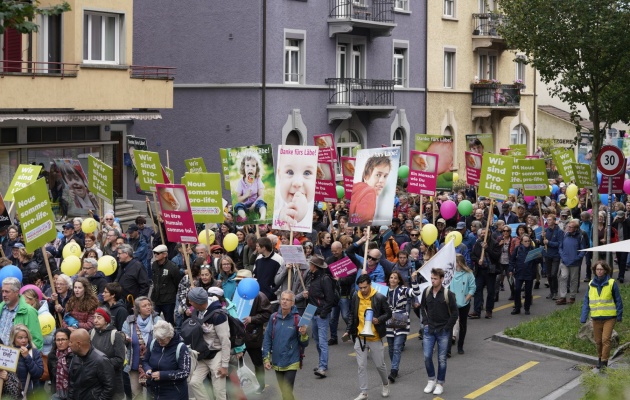 The songs of Swiss-Croatian singer Bernarda Brunovic was one of the highlights of the final. The singer, who was born blind, has often told how her parents did decide for life despite the opinions of doctors who suggested an abortion.

Cardiologist Dr Dermot Kearney, who had travelled from Great Britain, underlined that human life begins at conception: “This is a scientific and biological fact”, adding that doctors “must stand up for the value of all human lives”. With his colleague Dr Eileen Reilly, he set up an Abortion Pill Reversal service in the UK for mothers who had taken the abortion pill but regretted it shortly afterwards and wanted to save their babies' lives. 36 children’s lives were saved so far, he said.

The event also included messages by representatives of the free church movement Pray For Switzerland, the Protestant Church, and the Roman Catholic Church.

National parliamentarian Yvette Estermann presented the initiative “Sleep on it once”, which aims to grant a one-day reflection period for women before an abortion.

In Switzerland, the March or Life has suffered attacks on previous years, and organisations such as the Evangelical Alliance had called last week for everyone to respect freedom of speech.

This year, police made sure far-left extremist counter-protesters could not come near the pro-life event, although the beginning of the march had to be delayed. According to a police statement, eight arrests were made and tear gas was used to stop a small group from breaking the police brigade. Around 150 people were identified with identity checks.

The 2022 theme of the March For Life had to do with a policy of demanding a 24-hour reflection period for women who have asked for an abortion.

Published in: Evangelical Focus - europe - Under police protection, 1,000 march for life in Zürich