Churches from many regions met in Tirana to pray for the country and to speak of God as the “only hope” for Albania. 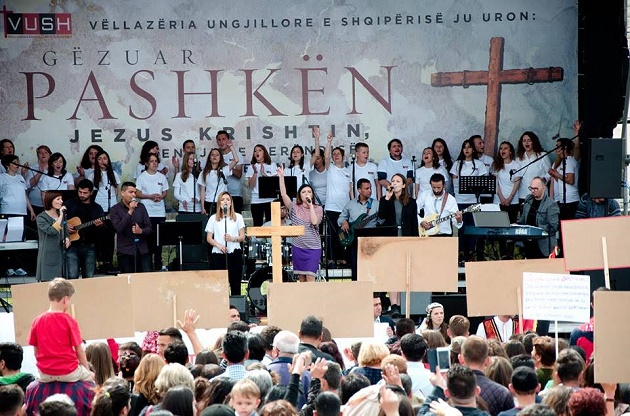 Times of worship during the Easter celebration in Tirana. / VUSH

About 4,000 evangelical Christians rushed to Tirana’s main boulevard from every corner of Albania to celebrate the Resurrection of our Lord Jesus Christ on Easter Sunday.

They marched symbolically as a group for a short distance until they gathered around the square that holds the name of Saint Mother Theresa.

Despite warnings from the government released for its citizens to avoid crowds and churches that day, and amid heightened security and increased police presence outside church buildings and around the square, many people showed up to praise and worship God. 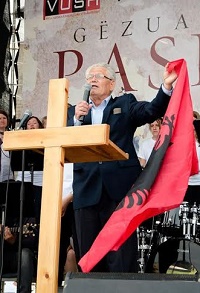 The political crisis prior to the general elections in June is a bad sign for many people, believers included, who have lost hope in the government and seek to find better life in the West. “The Easter gathering highlighted the idea that our only hope is in God Almighty”, the promoters of the event said.

National church leaders prayed over the nation and the state leaders for peace, understanding and willingness to work out their difference for the good of Albania and the Albanian people.

Words of encouragement and a short sermon on the meaning of Easter were delivered from leaders of the Evangelical Alliance.

This is the third time the Albanian Evangelical Alliance (VUSH) organizes a similar event. 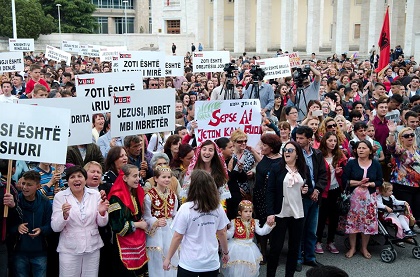 This year will mark several milestones for the Albanian Evangelical Alliance.

Besides the celebration of its 125th anniversary, preparations are underway for the 500th anniversary of the Protestant Reformation, another public event that will hold a symposium for academics and politicians, an exhibition of evangelical literature and several other events in cooperation with churches and organizations, members of the Albanian Evangelical Alliance.

Members of the VUSH board said: “Please pray for continuous unity among the church in Albania, to partner together for our common mission, which everyone is called to.”