The Swiss Evangelical Alliance and free evangelical churches say it is “a step in the wrong direction”. 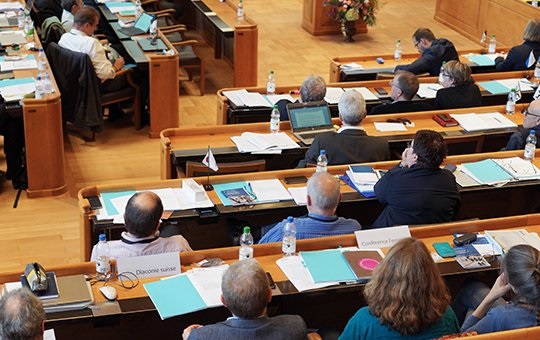 The historic Protestant Church of Switzerland has voted to allow same-sex marriages in its churches.

After what was described as a “lively” but respectful debate during the SEK autumn assembly, 45 delegates voted in favour, 10 against and 5 abstained.

According to Swiss news website Livenet.ch, the majority of those who backed the new position referred to previously adopted positions by the SEK ‘church parliament’, which had stated that one does not choose his or her sexual orientation but it is determined by God’s creative will.

The vote came as the Swiss national parliament works to pass a new “Marriage for All” law that would equal the rights of same-sex marriages with those of heterosexual marriages.

The SEK now officially “endorses the opening to homosexual marriage” and “encourages all member churches to apply the expected new civil definition of marriage for the blessing of marriages”.

It also “encourages all member churches to respect the freedom of conscience of the priests”.

The regional SEK churches in every Swiss Canton will now have the last word on these new guidances.

FREE EVANGELICALS: IT IS NOT BIBLICAL

Free evangelical Christians in Switzerland overwhelmingly disagree with the decision made by the Protestant Church.

Peter Schneeberger, President of the Association of Free Churches (VFG), reacted to the news saying that “the marriage between man and woman still has a special status for us, based on its distinctive potential and on God’s order of creation”. He added that the position of the Protestant Churhc is now opposed that of the “majority of the world churches”.

Meanwhile, the Swiss Evangelical Alliance (SEA), which has among its members both free evangelical churches and Protestant communities, also expressed its disappointment with the decision of the SEK, which it described as a “step in the wrong direction”.

“The State is responsible for guaranteeing the protection and the rights of same-sex couples”, the SEA said in a statement, but “the Christian church has the task of orienting itself on the full witness of the Bible, and looking at the developments of society from this prism”.

The Alliance admits that there is a “theological discussion”, and adds that it will continue to take part in “forums” which reflect on “careful counselling” for same-sex attracted people both on a “theological and a praxis level”.

The SEA emphasised the need to protect the freedom of conscience and of speech of the ministers of the SEK who do not agree with the doctrinal changes and hold to a traditional biblical approach to marriage and sexuality.

With the decision of allowing same-sex marriages, the historic Protestant church of Switzerland follows the example of other Reformed churches in Europe which have introduced changes in its doctrine on marriage in the last few years. This has been the case in countries such as Austria, Germany, France, Belgium, Scotland, and Finland, among others.