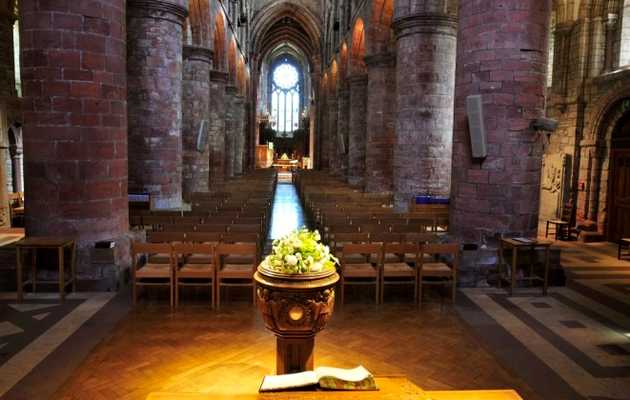 The Church of England is to debate plans to introduce a ceremony akin to a baptism to mark the new identities of Christians who undergo gender transition.

The Rev Chris Newlands, the vicar of Lancaster Priory, has proposed a motion to the General Synod to debate the issue, after he was approached by a young transgender person seeking to be “re-baptised” in his new identity.

The motion, which was passed by Blackburn Diocese last month, calls on the House of Bishops to consider whether it should introduce a new service to mark the milestone in the life of a trans person. A spokesperson for the Archbishops’ Council confirmed that the motion had been received, but said it would not be debated imminently.

Newlands urged the church to take the lead on welcoming a group that suffered high levels of discrimination.

He said he knew a number of trans people though his work with LGBT organisations. “It’s an absolute trauma to go through this, with the surgery, as people get a lot of transphobic bullying. The church needs to take a lead and be much more proactive to make sure they are given a warm welcome.”

The motion had “captured people’s imagination”, he said, and already gathered a large amount of support. It has been passed by the parochial church council, the Deanery Synod and the Blackburn Diocese, which covers Lancashire.

Newlands said: “I wanted to bring it to the General Synod as a commitment that bishops will take seriously, and for them to take the next step of getting a liturgy which parish priests can use for people who do the transition where they can be affirmed in the church.”

Newlands was asked by a church member who had undergone gender reassignment if he could be re-baptised. Recalling the conversation, Newlands said: “I said: ‘Once you’ve been baptised, you’re baptised’. He said: ‘But I was baptised as a girl, under a different name.’

“I said: ‘Let me have a think about it’. So we did and then we created a service, which was an affirmation of baptismal vows where we could introduce him to God with his new name and his new identity.”

The service, at Lancaster Priory, was not the first time such ceremony to have taken place. Susan Musgrove, 62, who underwent gender reassignment three years ago, had a service of “public affirmation” a year later at St Andrews Church, in Corbridge.

Musgrove, who has written about her experience, described the service as a landmark moment, and the “final stage in what has been a life-long journey”.

She said the motion was fantastic news.

“Give Blackburn their due, they have put this down as a one-line motion. It’s no big deal, it shouldn’t be a big deal,” she said.

Susan Musgrove, centre, with, left, Rev Cecilia Eggleston, Paster of the Metropolitan Community Church in Newcastle-upon-Tyne and Rev David Hewlett, Vicar of Corbridge, before the start of the Affirmation service for Susan at St Andrew’s Church, Corbridge, Northumberland.

“In the day and age of same-sex marriage, same-sex parenting, for the Church of England to acknowledge this, to want to take it to the House of Bishops – it’s fantastic.”

She said the service, which was attended by her family including her two children, made her transition feel real.

The Church of England’s position on transgender people accepts that two opposing theological views of transexual people’s experience and gender transition can “properly be held”, similar to that of the views over women’s ordination, according to a House of Bishops memo in 2003.

However, a more formal recognition of gender reassignment would provoke controversy within conservative sectors of the church.

Andrew Symes, the executive secretary of the Anglican Mainstream, said: “The Christian faith has always taught that people are created male and female. We speak for the conservative traditional point of view. We are aware there are a number of people who want to change from one gender to another and that’s a new thing for the church to deal with. It would be something that would go against the teachings of the church up till now. It would be something that would cause controversy.

“To recognise all people is something the church should be doing but to have a service of blessing for someone to change their gender is a new idea. It’s not been discussed before in the Church of England. It would need a lot of discussion and debate by theologians and I would need to know whether there are other agendas by the people bringing it. I would be very surprised if the diocese has passed the motion without a lot of discussion and debate.”

Symes suggested the motion would present a “different order” of discussion to that that has convulsed the church over the ordination of female priests.

A spokesman for Blackburn Diocese said the vote on the motion had been carried by a majority.

He stressed that it was the first step in a process which would see the motion laid before the General Synod business committee for consideration as a potential item for debate. It was unlikely that the motion would be debated any time soon by General Synod, due to a busy business schedule this year.

The spokesman said: “The Rev Chris Newlands of Lancaster and Morecambe Deanery produced an enlightening and informative paper on issues surrounding the welcome of transgender people into our churches and a response to their needs for prayer and he opened the debate with a presentation. A thoughtful series of speeches followed, before a vote was taken.”

A spokesperson for the Archbishops’ Council said: “Any of the 42 diocesan synods is free to propose items for debate at the General Synod. The Blackburn motion will join a queue of motions for debate and is therefore unlikely to be debated imminently. As the motion itself makes clear, any motion passed at General Synod would be the beginning not the end of a process.”

The motion states: “That this Synod, recognising the need for transgender people to be welcomed and affirmed in their parish church, call on the House of Bishops to consider whether some nationally commended liturgical materials might be prepared to mark a person’s gender transition.”