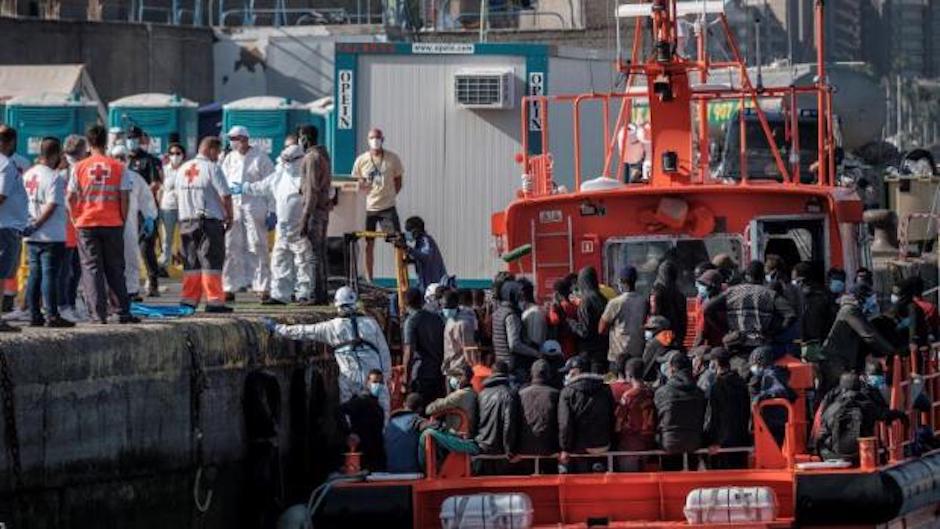 A boat arriving in Arguineguín this November after having carried out a rescue on the coast. / Twitter

The Canary Islands have become the epicenter of the latest episode in the European migration crisis.

At the beginning of the year the action was concentrated on the islands of the Aegean Sea after Turkey challenged the European Union and opened its borders. However, in recent weeks Canarian ports such as Arguineguín have been overwhelmed by the arrival of people.

“The situation is extraordinary, as well as regrettable and serious. It is a humanitarian crisis. The limitation of the island's own territory makes the problem more evident”, explains Enrique Solana, director of the School of Architecture of the University of Las Palmas de Gran Canaria and member of an evangelical church in the same city.

According to the Ministry of the Interior, the Canary Islands have received the arrival of 19,566 people from January 1 to November 30 of this year, an increase of 881.7% compared to the same period in 2019.

The Arguineguín dock, empty for more than three months, and where more than 2,500 people have accumulated outdoors, has been the scene of this continued crisis.

“Thousands of people have been on that pier in the open, theoretically to fulfill the 72 hours of custody and police affiliation, but the stay has been extended. Things were getting so overwhelmed that two weeks ago they began to take people out in groups of 200 to leave them in the street, but that stopped because people protested”, explains Ángel Manuel Hernández, pastor of the Iglesia Misión Cristiana Moderna de Fuerteventura (Modern Christian Ministry Church of Fuerteventura) and member of the board of the Evangelical Council of the Canary Islands.

Misión Cristiana Moderna is one of the evangelical communities on the islands that has dedicated itself to welcoming and assisting newcomers. A work that has earned the recognition of the United Nations High Commissioner for Refugees (UNHCR).

“We serve the migrants who arrive with the basics, providing them with clothing, hygiene, medicine and accommodation, in dozens of cases. We also help them obtain their health cards and, since the pandemic began, we have been treating people in quarantine and Covid-19 cases, hand in hand with the Canary Islands Health and Emergency Service. We have people in the quarantine places, with their strict measures, who attend to their needs while they overcome the disease”, says Hernández.

The assistance provided by Misión Cristiana Moderna has a cost of more than 100,000 euros per year, which does not cover the subsidies to which they have access or the contributions of individuals. “What we need are permanent accommodation resources, such as the Foreigners Internment Centers (CIE in Spanish) or the Reception, Emergency and Referral Centers (CAED in Spanish), which is what we are and which allow us to manage transfers in an orderly manner, favoring the identification of vulnerability profiles to provide response and care according to their needs”, says the pastor.

“Things are so overwhelmed that the lawyers assigned by the government do not show up and that is terrible because many of them need asylum, especially those who come from Mali. This is something that should be provided to them and we are looking for a way to do it”, he said.

Beyond the economic issue, Hernández regrets what he considers an “improvisation” on the part of the central government regarding the situation. “I get the impression that they think this will end soon, but the migration phenomenon is not going to end. It is a question related to the situation of extreme poverty in all of Africa, and as long as that does not end, immigration will not end”, he said. 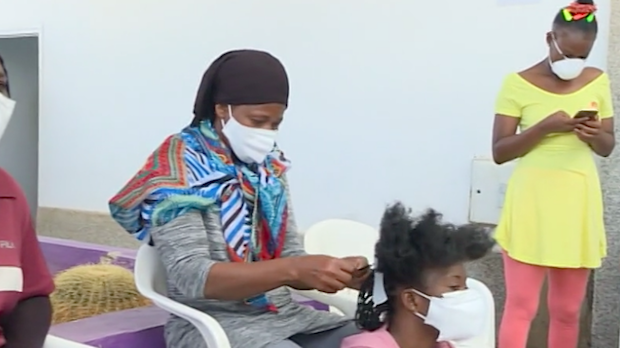 A group of women in the facilities of the Modern Christian Mission. / RTVE

For Solana, "the real problem is that any response thus far has been, few and far between". “The response of the central government has maintained a 'colonialist' attitude denying reality, according to Minister Grande-Marlaska, until the media have revealed the true situation. This is the same attitude of other European countries who would like to allocate funds to turn the Canary Islands into a continental retaining wall against migration from Africa”, he explained.

One must not overlook how this situation has been politicized. “The central government has established its own criteria, or rather its own interests, without taking into account the considerations of the different aspects that the local authorities request. Also, some of these considerations have been silent or low-key, due to the partisan collusion with the central government. Others have magnified the problems, for the same reason but in opposition. The conclusion produced by these attitudes does not solve the humanitarian problem, nor prevent the effect on the social and economic fabric of the islands”, Solana stated.

A place of passage

This November, in the midst of the migration crisis in the Canary Islands, the Minister of Foreign Affairs, Arancha González Laya, traveled to Senegal to negotiate a joint action with the local authorities to control the departure of boats from the Senegalese coasts. “We have been working for months both in the reception and in the collaboration of the countries of origin and transit to prevent irregular entry mechanisms within the European regulatory framework. We will do it in coordination, with all discretion and respecting the dignity of the people”, said the minister.

Spain is not the first country on the Mediterranean coast to meet bilaterally with an African country to address the migration issue. In 2017, Italy already closed a controversial agreement with Libya, by means of which it promised to give money in exchange for the Libyan coastguard to intercept illegal vessels. An agreement that was renewed in January this year despite criticism from many humanitarian organizations.

The reinforcement of surveillance on other Mediterranean routes, such as Libya or Southeastern Europe, have increased the traffic of boats towards the Canary Islands, which has grown by 499.1% compared to the previous year. The islands, however, are a place of passage. “Access to the European continent has been blocked, reinforcing surveillance on other routes and leaving the Canary Islands as the only channel of arrival in Europe. The main objective of the migrants continues to be to access the mainland, almost never staying on the islands, as they provide them with little prospect of job development”, explained Solana.

"Most of the people who come to the Canary Islands from Africa do not bring the intention of integrating into the local society, thinking only of their final destination, since their desire is to continue on their way to the continental zone”, he said.

However, Solana points out the integrative capacity of the islands, “we have traditionally lived with people from both African and Latin American territory”. “The problem lies in solving the humanitarian crisis that causes the legitimate right to seek a better life by finding greater protection, and solving the tourist crisis that produces a chaotic perception and that adds negative opinions about security which hurts tourism, the main source of income for this community”, he added.

The low resettlement of people and the risks of the 'first stage' of the journey, however, make the idea of ​​continuing to the mainland difficult for many. “People arrive in pitiful conditions, after having suffered a lot. Most take about two years to reach Morocco. They travel from their countries on foot. Women suffer all kinds of hardships, such as rape, mistreatment or unwanted pregnancy. Many of them arrive with small children who were born on the road. In Morocco they work a whole day for a simple head of fish, waiting to have the money to board a boat that costs, in the case of the cheapest, about 1,500 euros”, explains Hernández.

The Spanish region with most arrivals

According to the latest report from the Ministry of the Interior on irregular immigration, the Canary Islands absorb the vast majority of arrivals throughout Spain. The archipelago has welcomed more than half of the 37,213 people who have arrived between January 1 and November 30, 2020, and that in total represents an increase of 25.7% in arrivals compared to the previous year.