The European Evangelical Alliance: 2010 to the present

An emphasis has been placed on helping to strengthen and develop national Evangelcal Alliances, especially those founded in recent decades.

I limit my remarks on the past decade for two main reasons. First, as a professional historian, I believe we still lack the historical distance needed to present and interpret meaningfully the events of this time period. Second, having been an EEA board member since fall 2013, I am too closely involved with the organization to take a detached approach.

In 2010, Niek Tramper of the Netherlands succeeded Showell-Rogers as general secretary. Tramper had served with IFES Netherlands previously. During his tenure, the EEA headquarters moved from the UK to the Netherlands. However, Tramper stepped down from his position in 2012. An important part of his difficulty was financial, as the EEA was not able to cover raise funds for his salary.

Soon thereafter, Thomas Bucher of OM stepped in as interim general secretary, and he was named to the permanent position at the 2013 General Assembly. Bucher has devoted considerable effort to consolidating the work that was pioneered before his appointment.

For the first time, the EEA’s socio-political ministry in Brussels was no longer questioned, as a healthier financial foundation was laid due to designated funding for this specific ministry. Advocacy on behalf of evangelicals, the launch and dissemination of the Global Charter of Conscience drafted by Os Guinness, a Europe-wide coordinating role during the 2015–2017 refugee crisis, and creation of the European Freedom Network to fight human trafficking are just some of this office’s achievements.

Emphasis has been placed on helping to strengthen and develop national EAs, especially those founded in recent decades. Along with published resources, regional meetings of the EEA have proven to be of special value for some of the smaller and struggling EAs, such as those in the Balkans.

In recent years, a central database was established, and an up-to-date webpage and regular communications have strengthened connections with the membership. Further stability was achieved with the relocation of the EEA’s administrative headquarters to Bonn, Germany in spring 2019. 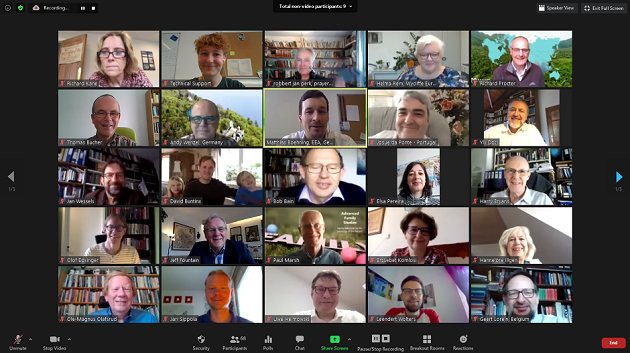 Some of the participants of the 2020 EEA General Assembly, which was held online. / Photo: Matthias Boehning.

A 2020 paper by Thomas Bucher provides insight into the EEA’s current direction. He wrote that the EEA is uniquely positioned:

This needs well integrated affiliates and well-functioning EEA Hope for Europe networks supporting the EEA and the national EAs in their task. A special emphasis needs to be put on (a) generations, each group (including youth and children) adding their share; (b) women being able to contribute with their God-given gifts; (c) BAME [Black, Asian and other Minority Ethnic groups] being an integral part of the European church; and (d) the disabled being ‘normal’ members of the church. (1)

From its small beginnings nearly 70 years ago as a counter-movement to what is now the WEA, the EEA has grown into a representative voice for European evangelicals today. European politics, culture and societies have changed greatly during these years. So has the situation for the Christian church, with many societies becoming increasing hostile towards evangelical Christianity. At the same time, some of the challenges that have accompanied the EEA’s existence remain today—most notably the financial ones. Bucher, who like many of his predecessors has raised his own financial support, plans to retire at the end of 2022. Financial limitations may well be the primary factor that determines the EEA’s future and the scope of its activity.

This is the fourth part of an essay about the history of the European Evangelical Alliance. Part one, part two and part three have been published before. A printed booklet of the whole essay can be purchased at the price of € 2.50 plus shipping costs at: fhinkelmann@worldea.org.