A group of concerned pastors from 50 churches published an “Open letter to the Belarusian people”. They address political leaders, warn them of any misuse of power, and point towards the ultimate responsibility of all Belarusians before God. 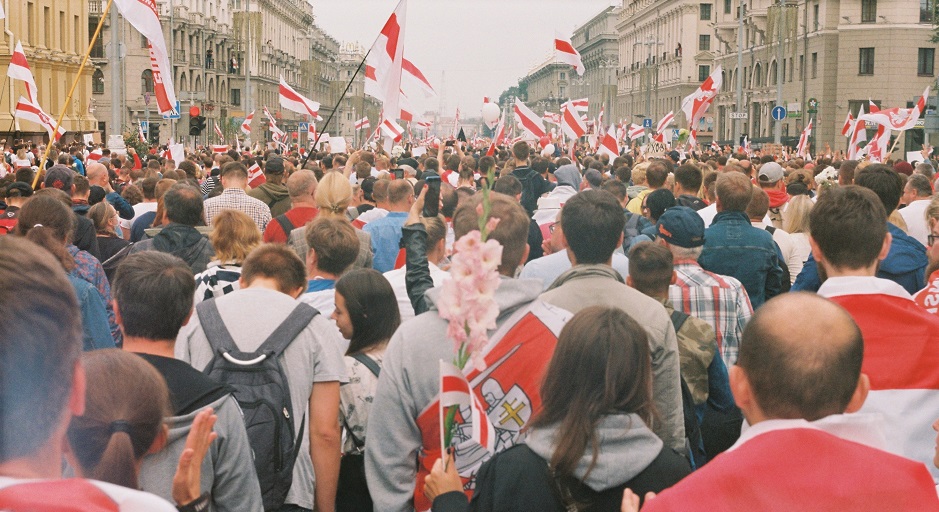 The Belarusian presidential election held on Sunday, 9 August 2020, by which the current president Alexander Lukashenko was officially declared winner with 80% of the vote, resulted in massive protests of the population.

Lukashenko is in power since 1994 and is viewed by Western observers as the last dictator in Europe. According to the international monitors the election was neither free nor fair. The opposition candidate Sviatlana Tsikhanouskaya claimed to have won a decisive first-round victory with at least 60% of the vote, and called on Lukashenko to start negotiations. The president rejected all negotiations and instead treated the protesters with his police forces.

Many countries and international organisations, including the European Union, the United Kingdom, and Canada, refused to accept the result of the election. The European Union imposed sanctions on Belarusian officials deemed to be responsible for "violence, repression and election fraud". Most of the opposition leaders have been forced to leave the country or are arrested together with thousands of protesters.

The Catholic Church in contrast to the Belarusian Orthodox Church, the predominate faith in Belarus that is closely tied to Russia, which has largely remained silent, chose sides. Hanna Baraban, a Belarusian journalist and political analyst writes: "During the ongoing crisis, the Catholic Church has been more outspoken than the Orthodox one because it preserved its political neutrality, as well as religious and moral principles. Catholic priests have condemned the violence and provided great spiritual support for the people of Belarus." Catholic Bishops in Belarus have called for calm and for an open dialogue between protesters and the government. Archbishop Tadeusz Kondrusiewicz, who chairs the Belarusian bishops' conference, appealed on August 11 to all parties to cease acts of violence. “At this crucial moment in our history, in the name of the God of boundless mercy, love, and peace, I call on all parties to the conflict to end the violence. May your hands, created for peaceful work and fraternal greetings, lift neither weapons nor stones. Let the force of argument, based on dialogue in truth and mutual love, prevail over the argument of force.”

The vast majority of the Evangelical Churches in Belarus, traditionally rather less politically engaged, kept silent. “Politics is none of our business”, a leading pastor explained. “We are there to pray and fast for peace in our country”. Man other Evangelical leaders would agree with this opinion. But now, a month after the election, a group of concerned Evangelical pastors from 50 churches across the country published an “Open letter to the Belarusian people.” Download the full version of the letter (Russian). 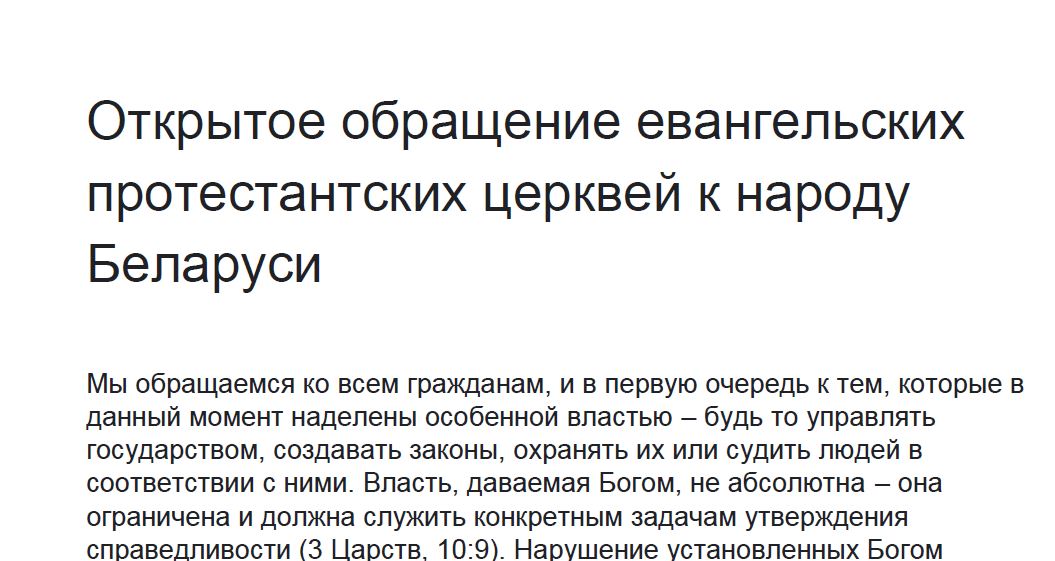 First lines of the Open Letter to the Belarusian people.

The letter addresses leaders in power, warns them of any misuse of power, since this will result in a national disaster and points towards the ultimate responsibility of all Belarusians before God.

In their analysis of the current mass unrest they name the reason for the unrest – Belarusian people have lost their trust in the government and the lawless actions of the security forces towards their own citizens. The Open Letter demands immediate action in four areas:

1. Stop any violence against peaceful citizens in opposition in Belarus and stop all forms of torture of innocent people, arrested and unjustly sentenced to years in prison. Such violence is the heaviest violation of the law of the state, as well as God´s commandment.

2. Release all unjustly arrested and sentenced people, who peacefully demonstrated against the government from imprisonment. Such arrests violet the constitutional laws of the Republic of Belarus (RB). People, who committed those crimes must be charged according to the laws of the RB.

3. Examine the presidential election, since the majority of the Belarussian people does not believe the official results and, in case of proved fraud, announce and conduct new elections.

4. Restore a just and faithful security force and juridical system in Belarus and the trust of Belarussian people to the government. Those who have violated the law and committed crime must be punished.

The Open Letter encourages the Belarusian people to express their legal constitutional rights in a peaceful dialogue with those who share alternative views and withdraw from any actions, which may divide the nation, instead they should work for reconciliation in society. A special appeal is issued to Christians, who are called to work for justice, peace and reconciliation in the nation.

To my knowledge, this is the first Evangelical appeal calling Christians and non-Christian for just, peaceful and reconciliatory action in Belarus ever. In the former Soviet Republic Evangelicals have always faced persecution and were seldom offered any chance for political action.

It is unlike that president Lukashenko will listen to voice of the Evangelical leaders. The danger is real that the signatories of the call will be interrogated, persecuted, arrested and tortured as many others before them.

But society will listen. The Evangelicals did not hide away, they stand with the people. And this will raise courage. And it is our hope the Evangelical churches across the country will listen and follow the call of their brave leaders. And the Evangelicals throughout the world should pray for God´s protection. May the good Lord grant the great nation of Belarus democracy and freedom.

Johannes Reimer is professor of Mission Studies and Intercultural Theology at the Ewersbach University of Applied Arts, Germany and director of department of Public Enagegement in the the Worldwide Evangelical Alliance (WEA).