What do Martyn Lloyd-Jones and Charles Spurgeon have in common? 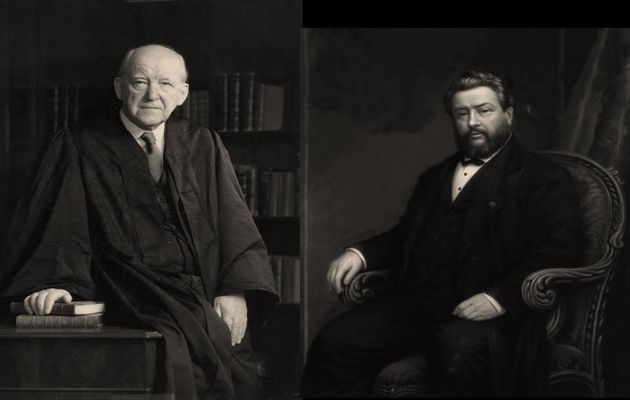 Against all odds, two deceased British preachers are coming back into fashion in our days, and not just in the English-speaking world.

Due to the renewed interest in these two defenders of the Gospel, this article will draw out ten similarities between Spurgeon and Lloyd-Jones so that we may know them better and follow their example of faithfulness to the God and Father of our Lord Jesus Christ.

Personally speaking, the Lord has used both men to strengthen me in the faith time and time again throughout the years.

So, what have they got in common? What are the similarities between these two great masters of the pulpit? Let’s get cracking...

As a general rule, we tend to associate both Spurgeon and Lloyd-Jones with the city of London given that Spurgeon spent 38 years ministering in his ‘Metropolitan Tabernacle’ and Lloyd-Jones was at ‘Westminster Chapel’ for 29. Nevertheless, neither Charles nor Martyn were originally from London. They both grew up in small towns as country boys. Spurgeon was from Kelvedon in Essex (with a population of just under 5,000) whereas Lloyd-Jones came from Llangeitho in Wales (which has less than 1,000 inhabitants).

In His providence and multiform wisdom, God called these two country lads to minister in the heart of one of the globe’s most important capital cities. From London, Spurgeon and Lloyd-Jones would speak to the nations. The Lord prepared them in the Jordan before unleashing them upon Jerusalem.

Both Spurgeon and Lloyd-Jones were persuaded that the most important task of any pastor is the preaching of the Word of God. Following the thinking of the Protestant Reformers, they believed in the centrality of the pulpit in Christian worship. A meeting without a message from the Scriptures would have been unthinkable for them. Without the preaching of the Word, they would say, there is no true worship.

The two men invested the best of their energy and sweat into their weekly preparation of sermons for Sunday and mid-week. Spurgeon preached around 3,600 sermons in London and Lloyd-Jones shared 1,600 (although he did minister in Wales for ten years before heading to the English capital).

They were pulpit giants because their whole confidence resided in the Scriptures which they expounded.

It is no surprise to see how the current revival of interest in the Gospel has walked hand in hand with the discovery of the works of Spurgeon and Lloyd-Jones. In fact, it is almost inevitable that anyone genuinely ablaze for the glory of God revealed in the Gospel would long to get his or her hands on material published by these two servants of God.

As we read the books of these men, the redemption carried out by Christ on the cross is practically omnipresent. They never grew tired of repeating the Good News that God had sent His Son to save all those who believed on Him. Lloyd-Jones’ wife once said that her husband was first and foremost a man of prayer and an evangelist before being a biblical expositor. As for Spurgeon, he almost always preached evangelistically in all of his messages.

The Puritan movement flourished in England between 1550 and 1700 and its goal was to reform the state church of England –the Anglican Church- in the light of Scripture. The Puritans were convinced that the principles of the Reformation had been cut short.

They were not happy with the reformation of English theology alone; they also aspired to a renewal in Evangelical conduct within and without the church.

The talks that Lloyd-Jones gave in the ‘Puritan Studies and Westminster Conferences’ between 1959 and 1978 have been published in his book ‘The Puritans: Their Origins and Successors’. Spurgeon was also to admit that he never felt so happy as when reading his beloved Puritan tomes.

When Spurgeon fell into depression or some other sickness, he always opted for Puritan literature as a source to strengthen his faith.

Puritan doctrine didn’t just affect how Spurgeon and Lloyd-Jones viewed Protestant pulpit ministry, but it also led them to expect great times of refreshing from the Lord. Lloyd-Jones preached a series of twenty-four sermons on the theme of revival and he constantly prayed for a moving of the Spirit. Nevertheless, he did believe that the church in England was in too comfortable a state to experience a genuine outpouring of spiritual power.

After visiting Ireland briefly in January 1860, Spurgeon came back to his church trusting that a mighty revival –similar to the one in Ulster- was on its way for London and England.

He appealed many times to the concept of revival throughout his published sermons and he prayed for better days when a powerful effusion of the Spirit would be poured out abundantly upon all flesh.

Since the two preachers were lovers of the Reformers and the Puritans, they were convinced Calvinists. Although they always treated their Arminian brethren with affection and tenderness, Spurgeon and Lloyd-Jones believed that the purest expression of Protestantism was indeed Calvinism.

To this very day, one of Spurgeon’s most downloaded online messages is his ‘Defence of Calvinism’ in which the Englishman points out that, as far as he is concerned, Calvinism is the Gospel. The Spirit of God applies to the redeeming work of the Son to those chosen by the Father before the foundation of the world thus assuring their eternal salvation.

Although he admired them greatly, Lloyd-Jones criticized John Wesley and the Wesleyan sector of the Methodist Church. He accused their Arminianism of making too much of man, of denying the free grace of God and of robbing saints of their eternal security. He felt that Arminianism made man depend upon himself for salvation and not solely upon the sovereign grace of God.

Spurgeon and Lloyd-Jones could not put up with liberal theology or, as they called it, “theological modernism” because liberalism denied the core doctrines of the Christian faith, namely, the Trinity, Christ’s double-nature, salvation by grace alone through faith alone, eternal condemnation for the ungodly, etc.

Both accused liberals of having invented another deity according to their own image and likeness.

The fight that ultimately cost Spurgeon his life was the infamous Down Grade Controversy. The Baptist Union to which Spurgeon and his church pertained was extending membership to liberal believers and churches. This sad news led Spurgeon into a deep state of depression.

Robert Schlinder, Spurgeon’s close friend, called this the “Down Grade” in the sense that the Union was watering down the Word of God in an attempt to attract more numbers.

With regards to Lloyd-Jones, he quite often referred to liberal interpretations of biblical texts as he developed his messages. Given the grand doctrinal and theological focus of the Welshman, he hit out at the anti-dogmatic spirit of liberalism which turned human experiences and reason into the final authority over and against Holy Scripture. In much the same way as Spurgeon, Lloyd-Jones did not consider liberals as true believers because they rejected the inspired apostolic Gospel.

As already explained, Spurgeon was fiercely opposed to the pro-liberal camp that had appeared within his beloved Baptist Union. He was so incensed that he came out of his denomination in October 1887. The direction in which the Union was heading broke his heart. He died five years later.

His wife, Susannah Spurgeon, said: “His fight for the faith had cost him his life. Yet he never regretted the step he had taken; for, throughout the whole affair, he felt such a divine compulsion as Luther realized when he said: I can do none other”.

Lloyd-Jones also lost many friends for similar reasons some eighty years later. The chief evangelist of the twentieth-century, Billy Graham, proposed that Lloyd-Jones take charge of an international association for missions and evangelism. Lloyd-Jones refused because he objected to Graham allowing Catholics, Liberals and even unbelieving politicians upon the stage with him as he ministered at different evangelistic crusades.

Furthermore John Stott, a friend of Graham, publically rebuked Lloyd-Jones in 1966 for insisting that Evangelicals come out of the Anglican Church of which both Stott and J.I. Packer were among the most prominent members. Lloyd-Jones was happy to work with other Evangelicals but not in detriment to the clear teaching of Scripture.

In sum, Spurgeon and Lloyd-Jones applied biblical truths to their lives which they preached to others week in, week out even when it cost them friends, followers and ecclesiastical influence. They believed that the truth of God was far more important than numbers and superficial church growth.

09.- Tasks outside the Church

As well as serving as pastors of God’s flock, both Spurgeon and Lloyd-Jones got involved in ministries beyond the four walls of the church to promote biblical values. Spurgeon opened an endless list of organizations to help the marginalized. He also started up his own theological seminary to train young men who felt called to go into the ministry. He frequently accepted invitations to preach at other denominations and he dedicated plenty of money to the mission-field.

Lloyd-Jones, just like Spurgeon, supported missionaries and felt at home whilst in the presence of other Evangelicals although he could never understand why the likes of Stott and Packer opted to stay within Anglicanism. He also served as the president of the Inter-Varsity Fellowship of Students to build up university students in the faith.

Like old brother Abel from yesteryear, the English preacher and the Welsh expositor continue preaching even though they have been dead for over 120 and 30 years respectively.

Thanks to the great wave of interest in the doctrines of grace throughout the Hispanic world, Spurgeon and Lloyd-Jones are almost becoming fashionable. Ironically, they are perhaps better known now than they ever were during their lifetimes. In spite of facing the hot wrath of many –even from their beloved Evangelical colleagues- it has pleased the Lord to honour the legacies of these two precious men. “I will honour those who honour me,” says the Lord (1 Samuel 2:30).

Throughout their distinguished lives, Spurgeon and Lloyd-Jones were known in the UK and the USA; but after their deaths, their works are being read across the whole planet. And if the Lord continues reviving His people in our generation, the good news is that they will be with us for a lot more years to come. Though dead, they continue speaking (Hebrews 11:4).

May their example of faithfulness to God and His Christ be a rich stimulus for us all!