It would be good to penalize the blatant human rights abuses in Qatar rather than applauding them by letting bonded labourers build the new stadiums for World Cup 2022. 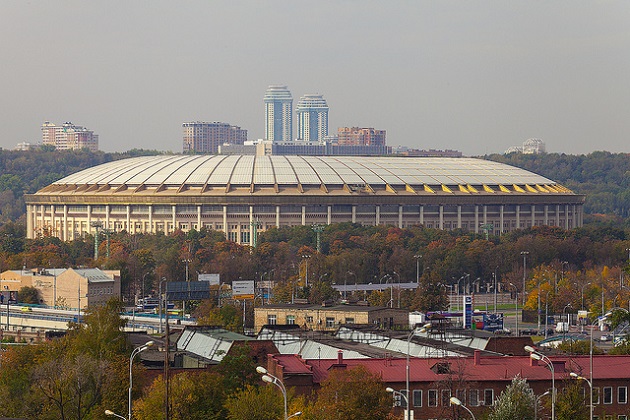 Following the thrilling victory of England over Tunisia in the first game, we learned that far more Brits watched the match than the recent Royal Wedding.

In comparison to the 13.1 million who viewed Harry and Meghan’s nuptials, current stats suggest that more than 21 million cheered on The Three Lions. Perhaps fans support football more than weddings because of its perceived independence from the control of outdated customs and institutionalized religion? Sadly, even as the icon of marriage has been marred by abuse and infidelity, so also has professional sport been plagued by institutional corruption and coercion. Make no mistake: I immensely enjoy watching the World Cup and have already spent more time than I should viewing matches and highlights. But in spite of the numerous benefits connected with this quadrennial global spectacle, its crookedness simply cannot be ignored or left unchallenged.

Confronting the injustices of FIFA is nothing new. The deception and bribery which previously aggravated conditions in Brazilian favelas and the South African Blikkiesdorp hardly need to be recounted here. This year’s tournament involves a country that has murdered journalists, still occupies a neighboring country, used prison labour for stadiums construction, and committed the largest doping violation in history. It may be easy to boycott all this if you are already disinterested in football, but I don’t know a single fan who is able to resist at least watching highlights of Ronaldo’s hat-trick. Are we thus demonstrating by our actions that the ends (global participation in exhilarating competition) justify the means? I sure hope not.

Perhaps one of the reasons we’ve failed in our efforts at reform is because we’ve failed in our assessment of the central dilemma: FIFA has successfully monetized the most popular game on the planet. The litany of criticism aimed at FIFA is important and needed, but it all tends to evaporate in the heat of the tournament’s intense allure. Thus, many accusations fail to ‘stick’ because they are frequently quite anemic: the system is bad. But this misses a vital piece of the puzzle: the game is good. We cannot engage the former successfully if we have not understood the way it capitalizes on the momentum of the latter.

Football is not perfect (as the newly implemented VAR is helping reveal), but it is good. There can be no doubt that the World Cup allows people from all around the globe to experience in some meaningful way the vital human needs of camaraderie, competitiveness, and celebration. The slogan of FIFA appears to work towards such ends—“For  the Game. For the World.”—but time and time again, we’ve seen just how profit-hungry this ‘non-profit’ organization is.

In light of this, we need to change our thinking: The World Cup should not be pitched as an ‘economic windfall’ for low-income countries, but carefully managed as a celebration of humanity’s inerasable playfulness; it should be regarded more as a burden of responsibility for wealthy countries than a ‘prestigious opportunity’ for poor ones. This also necessitates a change in strategy: Rather than trying to impress critics with peripheral perks (such as ‘renewable energy’ and ‘knowledge transfer’), let’s focus on achieving the primary aim (enjoyment of a game) without harming civilians. In recent years, FIFA has proven much better at dodging blame than actually caring about the wake of suffering it helps create. If we can agree that VAR’s detection of nastiness on the field is good, can’t we agree that it would also be good to penalize the blatant human rights abuses in Qatar rather than applauding them by letting bonded labourers build the new stadiums for World Cup 2022?

So what’s the solution? Vendors and business-people have profited from sporting events for as long as they have existed, and we should not expect that to change. But in our world of increasing global awareness, we should at least ensure this is done in a reasonable fashion. To start, the World Cup should only be held in countries that already have the infrastructure and stadiums to handle it. This causes much less upheaval and saves countries from throwing millions of £s away on stadiums that will fall into ruin. Because this model would be much more frugal, a significant percentage of profits could be given away: Host cities could partner with cities in low-income countries; a featured country could be selected to receive a portion of ticket sales for their organization of opening/closing ceremonies; or every team could represent a charity approved by The Life You Can Save. The possibilities are endless.

Ultimately, reform will need to be driven from the top down, the bottom up, and from the inside out. We may be seeing the first cracks begin to develop with Danny Rose’s recent vocalization about FIFA’s permissiveness of racism. It may be that only the players themselves have the power to break the spell in which their fans are held captive.

As the festivities thunder on in Russia even as I type these words, it seems appropriate to close with the powerful reminder of a man from that very country: “the line dividing good and evil cuts through the heart of every human being.”[1]

[1] Aleksandr Solzhenitsyn, The Gulag Archipelago, Part I: The Prison Industry, Ch. 4 “The Bluecaps