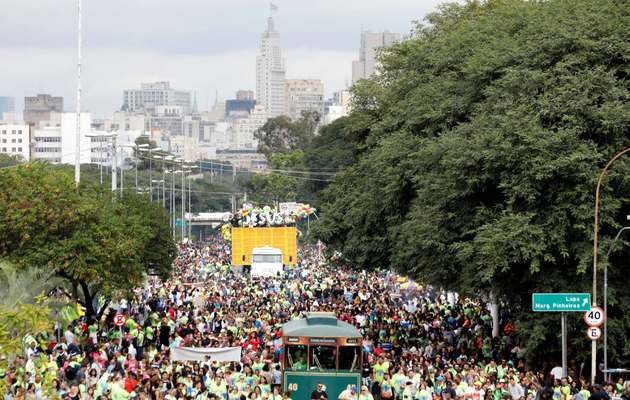 Two million Brazilians - according to the organisers - have taken to the streets of Sao Paulo to celebrate their faith on June 15 under the slogan #IfoundmyKing, in reference to Jesus Christ.

Since Wednesday night, the Town Hall cut off some of the city's main streets to celebrate the 25th anniversary of the March for Jesus, the country's biggest religious event of any kind.

Ten sound trucks paraded through Santos Dumont Avenue to the Marte gardens (in the north of São Paulo) with gospel music and samba-pagode, catchy rhythms with evangelical lyrics.

“THIS IS THE REAL BRAZIL”

Brazilians are used to demonstrations against Dilma Rousseff, where a sea of 'green-yellow' flags waved along Paulista Avenue. Citixens are also used to the marchs against the government of Temer with the red flags of the Workers' Party (PT).

But in this march there were no traces of politics. "This is the real Brazil, humble people who take to the streets, not because of political crises but to defend their beliefs", said Esther Solano, a professor of sociology who since 2013 analyses the profile of the people who participate in demostrations that take place in the city of Sao Paulo.

In Brazil, the March was started in 1990. In 2009, former President Luiz Inàcio Lula da Silva approved a bill to establish the National Day of the March for Jesus, sixty days after Easter Sunday.

Although politics is not part of the content of the march, Brazilian politicians, being aware of the impact of the event, did not want to lose the opportunity of promoting it. The videos of the mayor of Sao Paulo, Joao Doria, his Rio de Janeiro counterpart, Marcelo Crivella, or that of the evangelical deputy Marcos Feliciano, were the most watched.

Brazilian President Michel Temer was barred due to the corruption scandals that have pursued him for weeks.

Although evangelical Christians in Brazil are frequently accused in the media of homophobia because of their ethical stance contrary to homosexual relationships, a study during the march coordinated by university professors (based on 484 interviews and 4.5% margin of error), found that 77% of evangelical respondents agreed with the statement "the school should teach respect for homosexuals."

Those taking part in the March for Jesus, like the rest of the population, said they do not trust politicians. "The low trust in politicians was something we expected because Brazilian society as a whole is like that", the study explains.

"However, it is remarkable that many of them do not trust evangelical and Catholic politicians either. This proves that it is not true that evangelicals are a defined political target."