When we arrive at his house, the first thing we visit is the American’s office, with its low ceiling and artificial lights. The shift in culture emanates from everything I see. 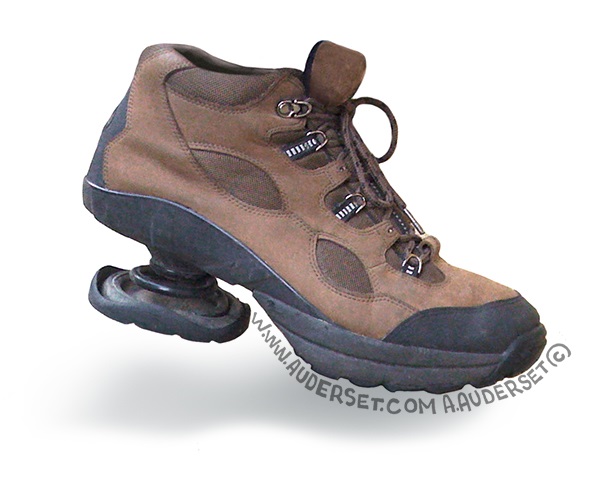 Read Part 1 of this story here.

Alone at Geneva airport, crazed, I await the departure with my two suitcases in my hands. They are full to bursting with ‘Idées reçues’ comic books in English (Conventional Wisdom). I have nonetheless found a little space in the hidden recesses to squeeze in a few spare pairs of underpants as well as some bars of chocolate (indispensable accessory for a Swiss person on his travels, if he wants to give gifts to the folks he’s visiting). I dwell on all the disadvantages brought about by this trip and replay again, from memory, my last phone call with Pastor Michel:

‘Alain? No, no, you’ll be leaving without me... Yes, I’m already here! I’ll be waiting for you at Atlanta airport, where we’ll get a connecting flight! No problem!’

His triumphalist tone, straight out of an advert for washing detergent, really has nothing reassuring about it... (Where have I come across this kind of guy before?)...

Just before sinking into doubt, I read the beginning of the book of Joshua. The words of victory which the Creator addresses to this conqueror find an echo in me. You might almost think that they had just been written for me. I lift my head, drop my role of victim, stick out my chest and decide to believe it. At last, I take off...

What a relief to find Pastor Michel’s familiar face in this country so alien to mine. We barely have time to greet each other than we already meet up with our American host. But, strangely, he doesn’t speak to me and ignores me completely... Discreetly, I move closer to my French friend’s ear:

‘Woah! There’s a problem, isn’t there? You’d think that the American has it in for me...’

‘Yes, it’s not surprising, it’s because you’re not invited.’

‘Yes, I told him that you were coming, and chased it up several times, but he never replied...’

The windows of the imagination

When we arrive at his house, the first thing we visit is the American’s office, with its low ceiling and artificial lights. The shift in culture emanates from everything I see. The subtlety of the odours given off by the wall-to-wall carpets, mixed with that of a lack of ventilation and to that strange, awkward feeling of being ‘de trop’, is unfamiliar to me. Fortunately for me, magnificent paintings, surrounded by solid wood, depicting nature, adorn his velvet tapestries, overladen with motifs.

I hasten to make an escape through this window of the imagination. These pictures aren’t just a depiction of reality, because images, after being captured by the eyes of an artist, are passed through the filter of the emotions of his mind and soul before being reproduced by hand on to this canvas. It’s the mixture of the two that creates all their magic.

Seeing my interest in this artwork, which he himself treasures, and learning that I am myself an artist, my host also comes over to the picture and looks at me for the first time.

The opening in the sky

I set off every morning into the nearby forest to meet up with God (phew, He lives here too!). I experience very strongly this strange sensation that above this land, there is a spiritually clear sky... It dawns on me, at the same time, that the sky in Europe, beneath which I have always lived, is more closed. I don’t understand exactly what this means but, walking along the road at the end of the forest, I am almost shocked by the large number of growing churches that I come across.

Another strange thing, the shameless advertising of buildings radiating darker forces, such as freemasonry. When the sky opens up, might it be possible that it isn’t just good that sneaks in?... Nothing to do with it, but on the side of the road I found a dead dog (I thought that this only happened in Westerns on the telly?!)...

Testimony of a dunce

I am invited to share my testimony in the class of a reputed university (to think that at school I was a dunce)... I am given free access to the canteen. The variety and abundance of what’s on offer there relegates any school canteen I might have come across up till that day to the rank of squalid cesspit. All I need to do is call as witness the number of coffee machines available with their selections of different caramel flavours ... and all of that for nothing! I sometimes wonder if all that is actually real.

Beyond the campus, on the footpaths linking the different buildings, loud-speakers broadcast classical music, packed with good intentions. These access routes, adorned with borders and sculpted bushes, have something too perfect about them, to be honest... As evening closes in, pretty much everywhere dim lights come on automatically. Everyone is so excessively polite here that I almost long for the graffitied insults you find so readily on the walls in our neck of the woods (I must be out of my mind)!!

Each time that I come back from my forest walks, I put newspaper inside my shoes to soak up the water that seeps in through the holes. The American hosting me must have become aware of this, because he has given me his. All my protests came to nothing - saying that I preferred mine, and that, because of the way they are, my toe at least has a window to watch the outside world – it was no use. Because of his insistance, I accept (I love to help out)... He reassures me by saying:

Crazy! His spare shoes literally have springs beneath the soles! If you ever come across a guy in the USA with a funny, bouncy walk, it might be the guy who lent me his shoes. Even the sofas in his lounge are equipped with giant springs, a bit like those wooden horses in play-grounds!

Being in their company, by the fireside, with all the invited guests forcing themselves to keep a straight face in a serious discussion, all the while bouncing around in a ludicrous, chaotic manner, is a fond memory!

The way the American looks at me has changed, however: it now has something warm-hearted about it.

As every morning, I end up in the forest. But today my feet are dry even though the ground is damp. It’s quite new for me, but I think that I like this experience. And as if that isn’t enough, I have received a message from Europe informing me that my comic book ‘Willy Grunch’ has won a first prize at Angoulême. So my book has been given a second chance, which will enable me to contact the media again, thanks to this unexpected success...

I am alone with God in this forest to rejoice in this piece of news and, as I raise my arms in the air as a sign of victory, as if to hug God better, the river in this wood creates the noise of a jubilant audience (unless it was the ‘flock’ of angels who came along with Him on the journey, applauding?!)

Published in: Evangelical Focus - Appointment with God - In pursuit of a sign - Part 2