An Open Letter to Phil Johnson

John MacArthur is no heretic. He has been faithful to Scripture, he did not deserve such treatment. His gracious response to the ‘prophet’ was praiseworthy. 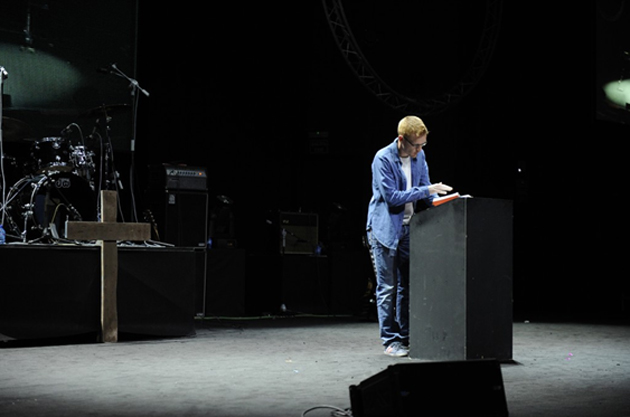 Will Graham, preaching in Spain. / MP

It’s Will Graham from Evangelical Focus and Protestante Digital here.

I know we have yet to meet in person but I have followed your ministry closely since the renowned Strange Fire Conference back in 2013. Ever since my conversion in December 2002, I have always rejoiced when I come across men of God whose hearts burn with passion for the Scriptures and defend the glory of God with holy zeal. That’s why I love all the preachers associated with Grace to You Ministries. You included, dear brother. Without knowing it, you have edified my life with so much profitable doctrine through your teaching and writing over the past two years. I thank you. And I bless the Father for the powerful ministry he has bestowed upon you.

I suspect you know the reason why I have taken this liberty of writing an open letter to you today. I do it with a strong sense of obligation in fear and trembling.

After I published a news update concerning the self-proclaimed prophet who accused Pastor John MacArthur of heresy at Grace Community Church last Sunday, several brothers and sisters wrote to me at my public Facebook page telling me about how you had reacted to my article. I checked out your page and read the following verdict:

“This piece struck me as a cheap-shot elbow in the ribs from a writer who probably has a charismatic bent. The headline is technically true, but grossly misleading—perhaps deliberately so. Someone seeing only the headline will think it’s a story about something John MacArthur has done or said that even “his home church” found questionable.

“They also misquoted what John MacArthur said in response to the guy who interrupted our worship. John didn’t say, “If I were a prophet, I would not speak like that.” He said, “If HE were a real prophet, HE wouldn’t ACT like that.”

“The article goes on to refer to “the prophet (now escorted out of the meeting)”—as if this guy were a true prophet, unaccountably shunned by this big church.

“It’s shoddy journalism from start to finish. It reads like the musings of a charismatic housewife whose religion was learned via The Kenneth Copeland Show rather than a truly professional, objective writer.

“People will get a much better understanding of what happened if they read the various Facebook accounts written by people who were actually there”.

Your comments definitely took me by surprise, Brother Phil. I think I need to do some explaining.

As soon as I read your observations, the thing that most concerned me was my misquotation of MacArthur. I immediately contacted my editor at Evangelical Focus asking him to replace “I” and “speak” with “he” and “act”. I apologized to him for such a slip-up. He was gracious to me and changed the quote straightaway. I was to blame. And it is only correct and biblical for me to ask for your forgiveness too. I understand your reaction toward my blunder. Your criticism was spot on. You were right. Since dear Pastor MacArthur was the man I misquoted, I also ask for his forgiveness publically. Please let him know. I hope you both may have mercy on me. I can say nothing more than: I am sorry. You are wonderful men of God. I meant you no harm whatsoever. Perish the thought!

With regards to the rest of your remarks, however, I must confess I was quite bewildered. Maybe you can help me out.

Firstly, the title. As you yourself have pointed out, the title of the article is “technically true”. The title read: “MacArthur Accused of Heresy at his Home Church”. John MacArthur was indeed accused of heresy at his home church. Or wasn’t he? As soon as any reader clicked on the link they could read the whole story. In reporting we try to give as many of facts as possible in as short a title as possible. It’s a form of art. If anyone had thought that MacArthur’s church had accused him of heresy, all they would have had to was read the article and see what happened. In no way did I try to be deliberately misleading. I just wanted to resume as much info as humanly possible into one short headline. I couldn’t think of anything simpler than my chosen title.

After that explicit opening clarification, any reader would understand that his ‘prophethood’ was something that he had claimed for himself. Under no circumstances was I endorsing what he said. I was merely seeking to describe what had happened for my readers. Even before I was informed about your reaction to my piece, I had already published a response one of my Facebook followers who compared the Scottish ‘prophet’ to Elijah. I wrote back: “He sure does speak like Elijah, but can we honestly compare MacArthur –a faithful man of God- with a wicked perverse king like Ahab? I don’t think anyone should be accused of heresy because he holds to a cessationist interpretation of Scripture. It’s not a matter of salvation or condemnation”.

My question is: why did one of these so-called prophets target a servant of the Lord like John MacArthur? Where are the prophetic voices speaking out against the real abuses committed in the church? Where are the spokesmen condemning liberal Christianity and pro-homosexual theology? That’s what I want to know. MacArthur, as far as I am concerned, is a prophet in our generation. Few like him are left. May our God raise up ten thousand more like him! To put the record straight: I love John MacArthur. I always have and always will.

I think few names make my blood boil as much as his. Of course there are others: Creflo Dollar, Jessie Duplantis, Joyce Meyer, Benny Hinn, Joel Osteen, Eddie Long, Todd Bentley as well as Kenneth’s other-half Gloria Copeland. My old man almost resurrects when I hear those names. I went to hear Gloria preach as a young convert in 2003 and she gave us seven tips on how to get rich from Deuteronomy. I didn’t know much about the things of the Lord back then; but I sure knew she was off her rocker.

Rest assured: Kenneth Copeland’s shenanigans are of no interest to me. I don’t know how many times I have warned people over the years about listening to false, money-grabbing teachers like Copeland. I consider Copeland and his band as enemies of the Gospel of Christ. It’s that serious!

Fourthly and finally, you accused me of having “a charismatic bent”. With respect to the cessationist/ continuationist debate, I do indeed side with Wayne Grudem, D.A. Carson and John Piper on this matter. I see myself as a “cautious continuationist”. Historically speaking, I am not convinced that the gifts of the Spirit died out after the passing of the apostles. I see them at work in the days of Justin Martyr, Ireneaus and Tertullian.

But I would never approve of what happened last Sunday. If John MacArthur were Kenneth Copeland, then yes, I probably would. But John MacArthur is John MacArthur. He is no heretic. He has been faithful to Scripture, to his wife and to his church for over 45 years. He did not deserve such treatment. The Lord will give him more jewels in his crown for such a test. His gracious response to the ‘prophet’ was praiseworthy.

Brother, to draw things to a close, I hope this letter helps clarify matters somewhat. Again, I cannot thank you and Pastor MacArthur enough for all of the good you have sown into my life over the years. I have been following John and Grace to You for about a decade now.

You guys are a wonderful inspiration to us younger believers in Europe. Here we need godly examples. In some places, Liberalism and Gay Theology are hitting hard. In others, music is usurping the place of the Word of God and faith has been reduced to an emotional roller-coaster. Some older brethren have even written to me trying to convince me that homosexuality is a gift of God. I aggressively refuse look up to such people as role models. They have prostituted Scripture.

My role models all have one thing in common: they are faithful to the Word of God and they don’t water it down to get more fans. That’s why I consider Dr. MacArthur and you as two shining examples for my life.

Thanks for taking the time to hear me out, Brother Phil. If you ever want to come visit Spain, my house is your house. Count on it. We would love to have you come preach in this nation and minister the Word of life. And if I can help you at all in any way, just let me know. It would be a joy to serve a messenger of the Lord like yourself.

I love you in Jesus Christ. And I pray the Spirit of God continues to empower you with boldness to preach the Word in season and out.

Have a wonderful Lord’s Day with your family tomorrow and a blessed week ahead.