Christian fake news? The story of the atheist doctor in Lombardy

Many have shared a heartwarming coronavirus testimony from Italy. But there are at least five elements that should make us doubt about its authenticity. 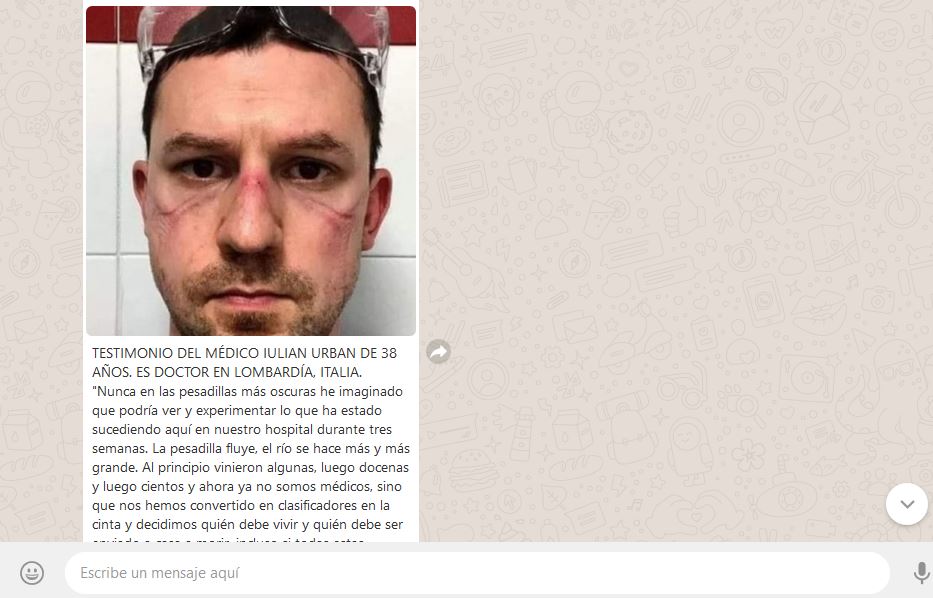 Capture of the story of a doctor in Lombardy shared in a Whatsapp message.

Whatsapp and other instant messaging applications are very useful in these times of coronavirus crisis. Through these tools we keep in touch with family, friends and members of our local church.

But - is it the best source for news? Experience shows us that forwarded messages we get on our phone often lead us to confusion. Whenever there are doubts, we should apply a series of authenticity filters like those we suggest at the end of this article.

THE ITALIAN DOCTOR AND THE OLD PASTOR

One of the news that has been broadly shared in Christian circles has been a story under the title: “Testimony of Iulian Urban, 38 years old. He is a doctor in Lombardy”.

It tells the testimony of a medical doctor who decides to return to the Christian faith after meeting a 75 years old pastor. The man is a patient who uses his time in hospital to read the Bible to other patients and care about them, bringing peace, comfort and faith even to the medical staff, who used to have atheist convictions.

This story has already been translated to several languages (including Italian, English, Spanish, French) and read by thousands in Europe and Latin America. Even some websites have published it.

But the story may be a case of false news. After doing some research, we conclude that there are at least 5 evidences that lead to this conclusion.

1. The photo. The image of the doctor that goes with the testimony, shared by many, has most probably been downloaded from the internet. Bored Panda includes the photo of the man in a gallery of “34 Heartbreaking pics of overworked doctors…”. The website links to the original source of the photo: Nicola Sgarbi, who is, yes, an Italian medical doctor. Nicola posted the photo on his Facebook profile on 14th March, saying he took the selfie “after 13 hours in the ICU”. But he does not mention God nor does he share a testimony of conversion to the Christian faith.

2. The original source of the testimony. “Testimony via Gianni Giardinelli” is what can be read at the bottom of the text in some of the earliest versions. A search on the internet shows that Gianni Giardinelli is a French actor of Italian origin, living in Paris. On his social media accounts, there is no trace of this testimony. Could the source mentioned be another person with the same name? Yes, but there seem to be no ways of contacting this person.

3. The name of the doctor. “Iulian” and “Urban” are not an Italian name and surname, but Romanian. Of course the doctor of the story could be a Romanian health worker working in Italy, but this is not the case. Emanuel Contac, a theologian in Bucharest has confirmed to us that Iulian Urban is the person who first shared the testimony in Romania, which situates the origin of the story in that country. Urban is not a physician but a lawyer who was a Member of the Romanian Senate between 2008-2012. He has thousands of followers on social media, which would help to explain why the story became viral in the first place.

But there is something else. Emanuel Contac himself contacted with Iulian Urban to learn more details about the story. The answer of the politician in a series of private messages was always that the Italian doctor did not want to be named and had every right to remain anonymous, having his privacy respected. After more than a dozen of messages, writes Emanuel via email, “I decided not to pursue this issue further. The conversation was an exercise in futility and absurd thought”.

4. The variations of the story. Another reason that should make us feel suspicious is that there are several versions of the testimony. Some versions do not speak of a pastor but of a priest. The twist can be traced back to the Facebook page “Ortodoxia Tinerilor”, also based in Romania, which published the story 3 times in two days - 18th and 19th March. The second time, it spoke of a pastor, but the first and third posts referred to a priest. The most popular version was that of the priest, with more than 4,000 shares. 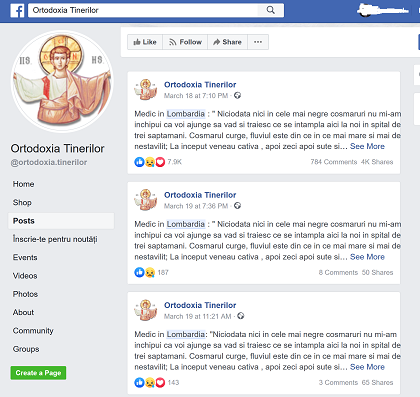 5. The opinion of Christians in Italy. Finally, there is the question of what Christian leaders in Italy think of this story. We asked a member of the Italian Evangelical Alliance board, who then contacted evangelical pastors of denominations such as the Assemblies of God and the Romanian Churches in Italy. They all agreed, we were told, that the testimony “is not reliable”.

All of these elements point to the conclusion that the story about the doctor of Lombardia is an example of false news.

Is there a chance that there might be some truth in the story and that the testimony was heavily distorted as it was shared? Yes, this is of course a possibility. It could be that what we read on our phone is a version of a version… of a true story. But even if that was the case, should we pay attention and share information which we know includes several untrue aspects?

HOW TO IDENTIFY A FAKE NEWS STORY

A story that comes to us in the form of a Whatsapp message should always go through a series of filters which help us assess its authenticity. These are some questions that may help:

- Does the person who is forwarding this information to us know the origin of the message?

- Does the information have a link to more information? If so, does the website/source deserve our trust?

- Does the story come with the name of the author? Is there any chance to confirm that this person is who he/she says he is?

- Has the story a date in which it was written?

- How is the writing? Does it give detailed and verifiable data? Does it include sensationalist elements?

- Are there other media who have published this story?

- Are there reasons to think that the author of this story was seeking to provoke a certain reaction in the people who read it?