Jihadism in Europe: the challenge of tolerance and integration

There were 78 Jihadist attacks or attempted attacks in the EU between 2017 and 2019. “The biggest failure in Europe is the failed integration of Muslims”, the World Evangelical Alliance Director of Public Engagement says. 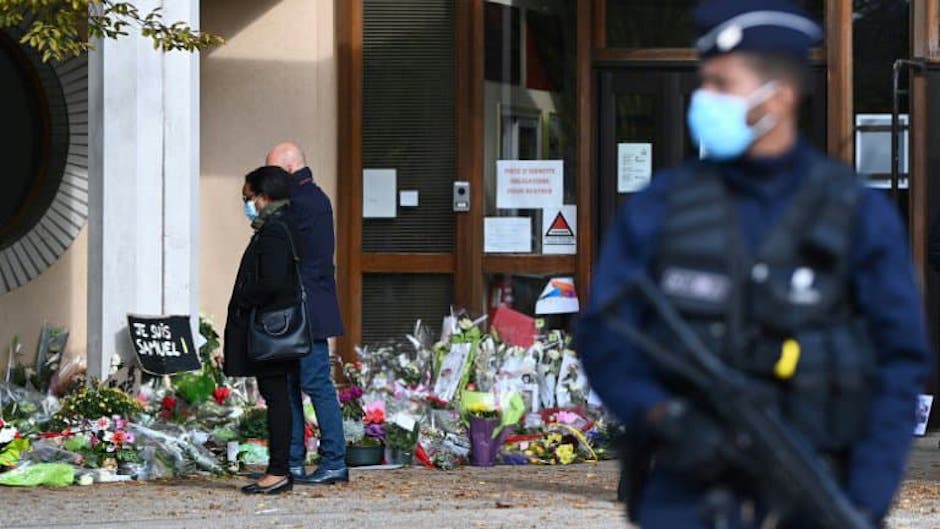 Improvised memorial to Professor Samuel Paty, who was killed in October for showing a caricature of Muhammad in class. / Twitter @BFMParis

The French National Assembly will debate the “Draft law to strengthen secularism and the republican principles” in January 2021, which could lead the course of action of other European Union member states.

Prime Minister Jean Castex has said that the rule is “a law of emancipation against religious fundamentalism” which seeks to “guarantee the free exercise of worship and the respect for republican principles”.

The draft law obliges employees of companies subcontracted by the public sector not to show their religious affiliation (by wearing a veil, for example). It also stipulates that entities which want to receive a grant must sign a document on gender equality, committing themselves to respect “republican values”.

Furthermore, it penalises virginity certificates and announces stronger controls to prevent forced marriages and polygamy, among other issues.

Of the 436 people arrested in the European Union in 2019 related to Jihadist terrorism, 202 were captured in France, the country with most arrests of this kind, according to the Europol's 2020 Terrorism situation and trend report.

The document also shows that France is the place where most attacks and frustrated attempts at Jihadist attacks were recorded in 2019, with seven in total.

A complex debate for a familiar scenario

The beheading of Samuel Paty, a secondary school teacher working near Paris, for showing a caricature of Muhammad in a classroom, revived the harsh rhetoric.

The Austrian Chancellor, Sebastian Kurz, urgently appeared before the media to assure that they would confront “political Islam” and that they would “not show any false tolerance”.

The scenario is not new. Between 2017 and 2019 Europol has counted 78 Jihadist attacks or attempted attacks in the EU. According to its report, links to Jihadist terrorism has been the main reason of most of the arrests in the territory between 2015 and 2019 (3,057 arrests).

According to Europpol, “in 2019, nearly 60% of Jihadist attackers were citizens of the country in which the attack or plot took place. Almost 70% were between 20 and 28 years old, and 85% were men”.

The National Council of Evangelicals in France (CNEF) believes that “it is normal for [President] Macron to promote a tightening of surveillance because the risk of an attack is significant”.

However, they consider that, although “the adoption of additional means of information and control may be necessary in some cases, it is inconceivable that in order to eliminate an active minority of a single religion, restrictions should be imposed on all other religions in the name of equal treatment”.

“Extremism, whether political or religious, has very serious consequences. Some are taking advantage of this religious extremism to generalise the risk to all religions”, warns Clément Diedrichs, general director of the CNEF.

Although some European Union countries have already adopted stricter measures against radical Islamism, such as banning mosques from receiving foreign funding, the latest attacks in France and Austria have once again hardened the discourse.

Macron and Kurz's statements in favour of combating “Islamic separatism” and "political Islam” have triggered a whole wave of demonstrations in countries where the majority of the population is Muslim, calling for a boycott of French products and insulting the French president.

Furthermore, the French justice system recently sentenced two of the accomplices in the attack on the satirical magazine Charlie Hebdo to 30 years' imprisonment each, and a third to life imprisonment.

According to the International Observatory for the Study of Terrorism, deaths from Jihadist attacks in Europe accounted for 0.2% of the total, most of them concentrated in the regions of Central and South Asia (39.7%) and Sub-Saharan Africa (39.20%).

“The biggest failure in Europe is the failed integration of Muslims”

“The biggest failure in Europe is the failed integration of Muslims in our European societies”, says Johannes Reimer, Director of Department of Public Engagement in the the Worldwide Evangelical Alliance (WEA).

According to Reimer, “the majority of Europeans wish Muslims to leave Europe, which appears to be impossible. The resistance on the side of many, especially evangelicals, even to start a conversation with any Muslims is high”.

“At the same time thousands of them are tired of any form of radical Islam. Never ever before there was so much interest for inter-religious dialog. And never ever before have we seen so many Muslims convert to the Faith in Jesus”, he adds.

Reimer stresses that “this is an historic chance for the church of Christ in Europe. And surely also for the governments. I hope they accept the challenge, if not the radical Islam will recruit more and more followers”.

The Europol report warns that “extremist media in Europe, both physical networks and online communities, provide spaces for social and religious activities where individuals can radicalise”.

The Evangelical Council in France has asked the authorities to take them into account as an asset in addressing the problem. “Evangelical communities are often located in disadvantaged neighbourhoods, where, according to elected officials, they provide a social benefit through their activities and their ability to welcome everyone”, Diedrichs points out.

The general director of the CNEF stresses that they “are fervent supporters of secularism, which allows the existence of all religions in our country”.

"Many Christian brothers and sisters in other countries are showing us the way to stay calm in the face of the situation. Christ called his church to bear witness of his gospel regardless of the situation, and he has promised to accompany it”, Diedrichs concludes.

Published in: Evangelical Focus - life & tech - Jihadism in Europe: the challenge of tolerance and integration