Traditionalist Catholics burn down five houses of evangelicals in Chiapas

An evangelical pastor was arrested in the community of Mitzitón (Mexico) as he returned home to visit his mother. Since 1982, over 180 houses of evangelicals have been destroyed in this municipality.

Photo: one of the properties burned down in Mitzitón, Chiapas, Mexico. / Photo via El Universal

The crime was denounced by Esdras Alonso González, who leads the church and advocacy group Alas de Águila (Wings of Eagles).

The houses belonged to pastor Alejandro Jiménez Jiménez and his sons, who had been expelled from Mitzitón on 10 January, accused of building an evangelical temple.

Since then, Alejandro and his family were living in a refuge house of Alas de Águila in San Cristóbal de las Casas. Despite the reports filed to the police, they said, the prosecutor “has done nothing”.

Alejandro Jiménez was detained for an hour this week when it was known that he had returned to the municipality to visit her mother, who is ill.

It was then that traditionalist Catholics and members of the authorities burned down his properties. According to Esdras Alonso, “the traditionalists told him that he had to leave, but he responded that there in Mitzitón were his properties and his agricultural rights; and that they had no right to expel him”.

Since 1982, around 180 houses of evangelical families have been destroyed in Mitiztón only, the pastor of Alas de Águila said. Most of these native evangelicals have had to leave their properties, and been forcibly displaced to other places.

Alonso González explained that when Jiménez was expelled by the authorities back in January, local Catholic traditionalists thought he was building a temple, and destroyed the construction without properly researching. The fact was that he was building his first house made of cement and blocks.

Already in January, the attackers “took away from him the metal sheets and the wood for the construction, as they stacked his properties on one side”.

But this time, “they tore down the foundation of the building and burned down everything else”. 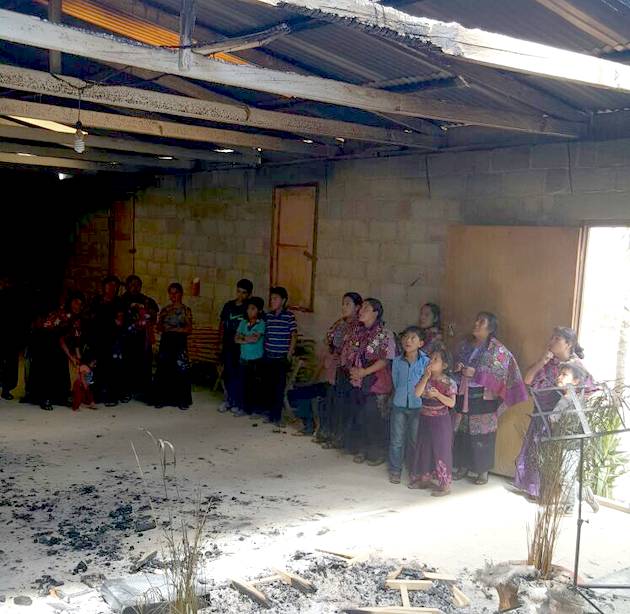 Native evangelical Christians in the Mexican state of Chiapas (mostly converted from Roman Catholicism) have denounced such kind of religious violence for decades. Power cuts, illegal detentions, aggressions, and the burning of houses are often justified by local authorities and religious groups because these evangelical families often refuse to contribute financially to the local Catholic festivals.