A study estimates the “economic value” of religion in USA

Authors of the study stated that religion is worth $1.2 trillion to the US economy. “Religion provides purpose-driven institutional and economic contributions to society.” 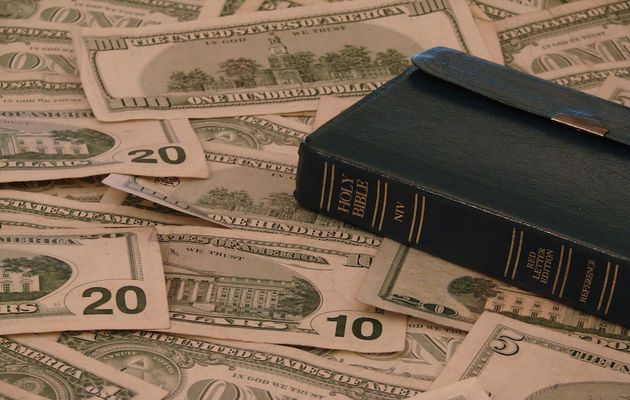 A new first-of-its-kind study, has taken an empirical look at the true “value” of faith, and found that religion is worth $1.2 trillion to the US economy, more than the worth of technology giants Apple and Microsoft combined.

The Interdisciplinary Journal of Research on Religion has released the study, made by Georgetown University’s Brian Grim and Newseum Institute’s Melissa Grim, which includes the value of services produced by religious organisations, and the impact religion has had on several top American businesses.

“Given the division of opinion on religion’s contribution to American society, this present study seeks to shed light on the topic by making an estimate of religion’s socio-economic value to society”, wrote the father-and-daughter team.

Indeed, we should know if the decline in religion is likely to have negative economic consequences”, they added.

The research, which encompassed 345,000 congregations across the United States and 150 million religious followers, also gave a higher estimate of $4.8 trillion which reflected the legacy of things including the Protestant Work Ethic.

“NOT A PERFECT STUDY”

Authors acknowledged the study “wasn’t perfect”, it does not account for the value of financial or physical assets held by religious groups, or the negative impact caused by some religious communities, including "the abuse of children by some clergy, cases of fraud, and the possibility of being recruitment sites for violent extremism."

And while the halo effect has been studied in some communities, assuming it on the national level may not be a perfect extrapolation. Still, they wrote, “the data are clear.”

Religion is a $378 billion to $4.8 trillion boost to the US economy, the Grims found. At the high end, religion makes roughly the same amount as a third of the United States GDP.

Congregations raise revenues of $84 billion a year, with $74.5 billion of it coming from individual donations. Religious elementary schools, high schools, and colleges pull in $74 billion, while charities like World Vision, Compassion International, and Samaritan’s Purse bring in more than $45 billion. 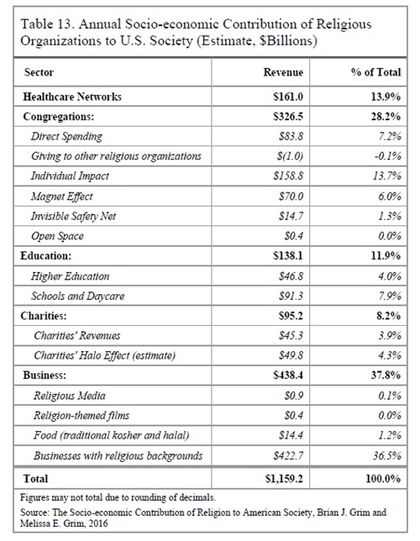 This first estimate, though, is “an undervaluation because it focuses on revenues rather than on the value of the goods and services provided by religious organizations”, the authors wrote.

AN ECONOMIC VALUE OF $1,2 TRILLION

The Grims also added in the halo effect a community receives from the benefits of having a church nearby.

In addition to the expanded value of congregations, the study showed that businesses with overt religious ties pull in $422 billion each year, though more than half of that ($279 billion) is Walmart alone.

“We believe that our second estimate of $1.2 trillion is a more reasonable estimate because it takes into account both the value of the services provided by religious organizations and the impact religion has on a number of important American businesses,” the Grims stated.

The authors concluded: "Religion is a highly significant sector of the American economy. It provides purpose-driven institutional and economic contributions to health, education, social cohesion, social services, media, food and business itself.”

"Perhaps most significantly, religion helps set Americans free to do good by harnessing the power of millions of volunteers from nearly 345,000 diverse congregations present in every corner of the country's urban and rural landscape", they concluded.

Published in: Evangelical Focus - world - A study estimates the “economic value” of religion in USA