Trump recognises Jerusalem as the capital of Israel

“It is the right thing to do”, the US President said. He also announced the move of the the US embassy from Tel Aviv to Jerusalem. 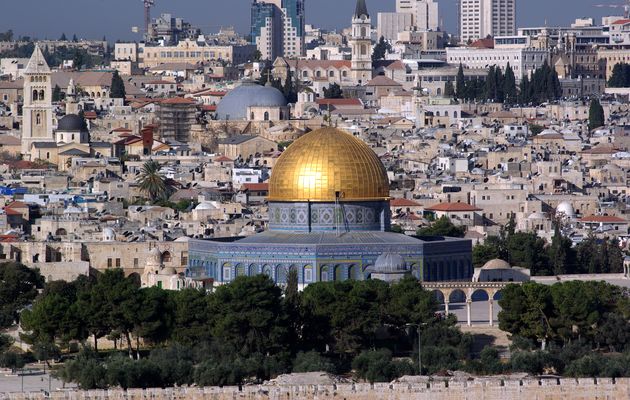 United States has recognised Jerusalem as the capital of Israel, but insisted that this decision would not change its administration’s bid to resolve the Israeli-Palestinian conflict.

In a short speech delivered at the White House, Donald Trump directed the state department to start making arrangements to move the US embassy from Tel Aviv to Jerusalem, a process that officials say will take at least three years.

“THE RIGHT THING TO DO”

Trump presented his decision as the recognition of “the obvious” and “the right thing to do”.

“It is time to officially recognize Jerusalem as the capital of Israel, while previous presidents have made this a major campaign promise, they failed to deliver. Today, I am delivering”, the US President said.

"Jerusalem is not just the heart of three great religions, but it is now also the heart of one of the most successful democracies in the world. Over the past seven decades, the Israeli people have built a country where Jews, Muslims, Christians and people of all faiths are free to live and worship according to their conscience and beliefs", he added.

“THE US SUPPORTS TWO-STATE SOLUTION”

According to Trump, his decision “marks the beginning of a new approach to the conflict between Israel and the Palestinians.”

However, “we are not taking a position of any final status issues, including the specific boundaries of the Israeli sovereignty in Jerusalem, or the resolution of contested borders. Those questions are up to the parties involved”, the President pointed out.

"The U.S. would support a two-state solution if agreed to by both sides", he concluded.

Israel’s government rushed to congratulate Trump for the speech, which the prime minister, Benjamin Netanyahu, described as an “important step toward peace”.

Netanyahu said Israel was profoundly grateful to Mr Trump, who had "bound himself forever with the history of the capital". 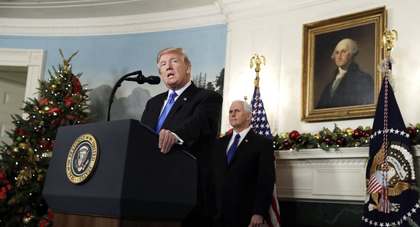 MAHMOUD ABBAS: “IT IS DEPORABLE”

"We are going to declare the United States disqualified as co-sponsor of any peace process or political process. In our mind, it has lost its ability to do or perform any efforts in this regard", spokesman Dr Nasser Al-Kidwa said.

Meanwhile, Ismail Haniyeh, the leader of Hamas which runs the Gaza Strip, has called for a "day of rage" on Friday and said it should "be the first day of the intifada against the occupier".

British prime minister Theresa May said Trump’s announcement was “unhelpful in terms of prospects for peace in the region”, and said the UK did not intend to follow suit.

French President Emmanuel Macron called the action an "unfortunate decision. France does not approve it."

"It goes against international law and the resolutions of the U.N. Security Council. The status of Jerusalem must be determined by Israelis and Palestinians in the framework of negotiations under the auspices of the United Nations", he added.

Dutch Foreign Minister Halbe Zijlstra also condemned the move. “We think it’s an unwise step and a counterproductive step. If we want to solve at some moment the conflict between the Palestinians and the Israelis, we need a two-state solution, and a one-sided step is not going to help.”

“Mr Trump is throwing the region into a ring of fire. What do you want to do Mr Trump? What kind of an approach is this? Political leaders exist not to create struggles but to make peace", Turkey's President Recep Tayyip Erdogan said.

UN Secretary General Antonio Guterres said it was "a moment of great anxiety. There is no alternative to the two-state solution. There is no Plan B”.

The United Nations Security Council is likely to meet on Friday to discuss the move, after a request by eight countries on the 15-member body, including the UK, Italy and France.

Additionally, the Arab League is to meet on Saturday.

Published in: Evangelical Focus - world - Trump recognises Jerusalem as the capital of Israel