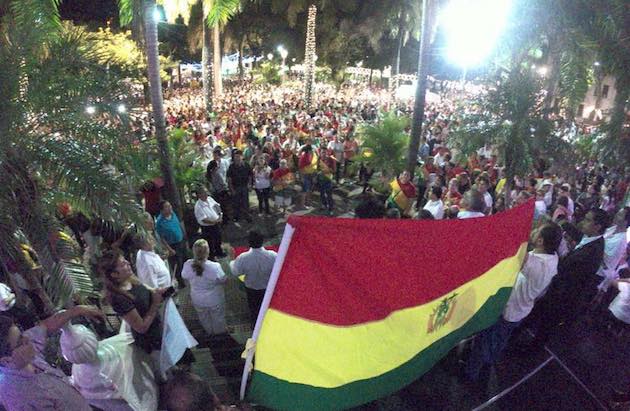 The new Penal Code of Bolivia could become a form of “state abuse” against Christians, the National Association of Evangelicals in Bolivia (ANDEB) has said.

According to article 88.1 of the new legislation to be approved under President Evo Morales states: “Whoever recruits, transports, deprives of freedom or hosts people with the aim of recruiting them to take part in armed conflicts or religious or worship organizations will be penalised 7 to 12 years of imprisonment”.

After an extraordinary meeting of the ANDEB with regional groups of churches, a public declaration was issued by the body representing evangelical Christians on a national level.

Evangelical Christians, it said, are “deeply worried” about the new Penal Code, that could ban evangelism and prevent other Christian events from happening.

The parliament, evangelicals said, “should begin the work of preparing a new Penal Code that reflects the social reality of Bolivia” and a new legislation should “emerge from a consensus and a social agreement of all sectors of our country”.

The government, opposition parties and other social groups, should “have the determination of working for solutions through sincere and proactive dialogue”. Any kind of “use of violence” should be avoided, evangelicals said.

According to the ANDEB, “there has not been enough participation of the citizens” in the process of writing the legislation that could severely restrict religious freedom.

It is more, the new Penal Code “is imprecise, ambiguous, badly written, contradictory and its punitive power can constitute state abuse”, the ANDEB said.

“We express our most resolute rejection of the inclusion of our ministerial activities in the list of possible conducts that go against the law”, the statement goes on to say. “The legislator forgets that the evangelical Christian churches in Bolivia are religious organisations recognised by the Bolivian state, and, therefore, legal entities”.

The ambiguous writing of article 88.1 “paves the way for any interested interpretations that can be used against our religious organisations”.

This new situation would collide with the Bolivian Constitution, which protects religious freedom and freedom of worship for everyone.

In the last days, evangelical Christians have started to take the streets to protest against the changes in the Penal Code.

“We maintain the emergency alert of the evangelical people in Bolivia, and as a consequence, events, gatherings, prayer meetings and meetings of spiritual intercessions for our country will be organised in all cities and places where there are evangelical Christian churches and organisations”.

In this context, a “National Emergency Comission” has been established by the leadership of the ANDEB and presidents of the regional evangelical bodies to “decide what measures to implement in the midst of the situation in which the country and the evangelical church is going through”.

Among the actions organised is a pacific march for this Tuesday 16th January in the city of Cochabamba.

On Sunday 21st, the evangelical churches of Bolivia will hold a special day of prayer and fasting.