Blackpool to apologise and pay fine for discrimination

The city council will have to compensate Billy Graham Evangelistic Association with more than 126,000€ for removing advertising from public buses. 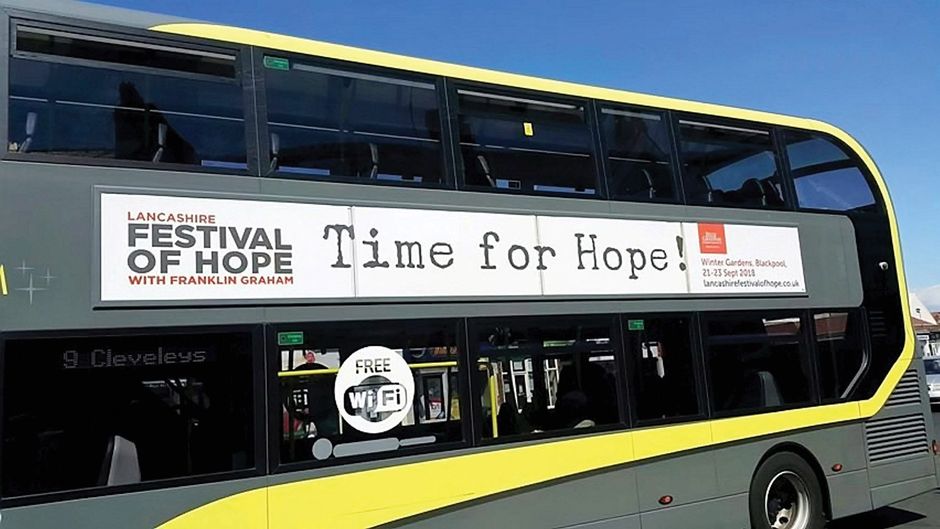 Furthermore, they recognise that their actions “suggest that some voices should not be heard”, and “also regret that we did not consult with the organisers prior to taking our decision”.

That is why they “sincerely apologise to the organisers of the event for the upset and inconvenience caused”.

In 2018 the city council decided to remove advertising for the event from public buses because of the " high tension" that had been created after LGTBI groups protested on social media against Graham's view of sexuality.

They pointed out that it was “as a result of us listening and acting on customer and public feedback which we aim to do at all times”, stressing that “Blackpool Transport is a proud ongoing supporter of the Pride and LGBT communities”.

Despite not being advertised on public buses, some 200 churches in the area promoted the Lancashire Festival of Hope and 9,000 people ended up attending the event, according to the organisers.

According to the Manchester County Court judge Claire Evans,t Blackpool “had a wholesale disregard for the right to freedom of expression. It gave a preference to the rights and opinions of one part of the community without having any regard for the rights of the organisers and of those who shared its religious beliefs”.

“An important moment for religious freedom in the UK”

Franklin Graham, president and CEO of the Billy Graham Evangelistic Association has positively assessed the outcome of the judicial process, stating that “this is an important moment for religious freedom in the UK”.

“We're grateful to God for the final outcome of this case, and for what it will mean for churches and Christians across the UK in the years ahead. The Good News of Jesus Christ must be proclaimed. My prayer is that this case will encourage Christians to stand firm" concludes Graham.

Blackpool Council has changed its policy on advertising on public buses. The new regulations warn that advertisements “likely to cause widespread or serious offence to members of the public" will be rejected.

“We have learnt from this experience. We are committed to ensuring equality of access and opportunity for the population of Blackpool and providing and improving quality services for all”, they add.

They also stress that the town is “also fully committed to meeting its obligations under the Human Rights Act 1998 and the Equality Act 2010".

Published in: Evangelical Focus - cities - Blackpool to apologise and pay fine for discrimination