Around 200 evangelists from 40 countries met to share resources and experience for the proclamation of the gospel in European universities. 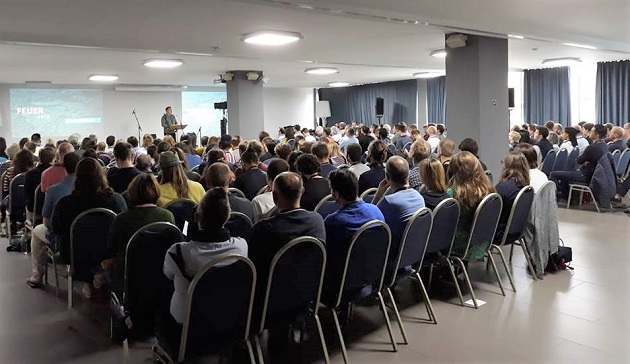 Talks and interviews were part of the programme of the 2018 FEUER conference. / Photo: Danjiel Petkovski

Around 200 people from 40 countries gathered between 1-5 November in Comaruga (Spain).

Participants of the 10th conference of the Fellowship of Evangelists in the Universities of Europe (FEUER) included students, pastors and workers of IFES. They all had with two things in common: a deep passion for Jesus and the desire to continue impacting European universities with the gospel.

Started 10 years ago by Lindsay Brown, FEUER is a network of evangelists connected to the university, which aims to encourage, provide resources and recover the place that the public proclamation of the gospel has lost in recent decades in Europe.

LINDSAY BROWN: “WE DO IT BECAUSE IT IS BIBLICAL”

As described in the book of Acts, evangelism requires both a personal and a relational approach, as well as public proclamation and persuasion. Both ways of communicating the message complement each other. The gospel is shared “not because it is fashionable, and we do not stop doing it because it's out of fashion - we do it because it's biblical”, said Lindsay Brown.

This year, one of the main speakers was Samuel Escobar, who shared deep reflections of a life linked to the ministry in the university.

JOHN LENNOX: “DIG INTO THE WORD TO HAVE SOMETHING TO SAY”

There was also an interview and an open question session with John Lennox. He encouraged the young evangelists to deepen their relationship with the Scriptures.

The program also included three evangelistic talks by Andy Wickham, Vaughan Roberts and Matthias Clausen, which were an inspiration to the new generation of evangelists.

One of the exercises proposed for all the participants, was to prepare a short evangelistic present it in small groups, and receive feedback from other participants

“Listening to a Moldovian present a short evangelistic talk - being critiqued by a Greek, a Belorussian, a Welshman and an Englishman... this is the real European Union!” , speaker David Robertson tweeted.

In addition to the general program, there was a program focused on academics, which aimed that those who work at the university could also be able to participate in University Mission Weeks, showing the intellectual credibility and coherence of the gospel.

On Monday, Some days later, several participants of the FEUER conference joined the Re-think University Week at the Autonomous University of Barcelona. John Lennox gave a lecture on science and faith, Vaughan Roberts spoke on sexuality and Julia Garschagen on the Bible and women. 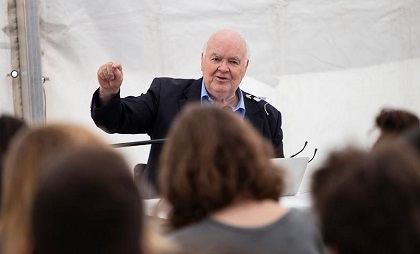 Additionally, during the conference, participants could see what God is doing in the universities of Europe. From the growth in Spain and Belarus, to the challenges that countries like Holland, Portugal and Switzerland are facing, the collaboration between the Balkan countries, and the training programs for young evangelists in Denmark, Germany and Spain.

A PERSPECTIVE ON EUROPE

Europe was the first to become Christian, but has also been to reject Christendom as a culture. Christians now have the privilege and responsibility to proclaim the gospel and persuade European societies to return to the gospel. The church must be prepared to communicate the good news, showing the beauty, truth and power of the gospel to a continent that cries out for purpose, identity and hope. Let's give thanks for the people called to communicate the message at the university, and pray that the Lord will continue to use them, so that many will hear and have the opportunity to respond to the gospel and be reconciled to God.