EU responds to pressure, announces new appointment of Special Envoy for Freedom of Religion or Belief

“The forthcoming appointment shows our determination to ensure the rights of all faiths and beliefs are respected across the world”, says Margaritis Schinas, Vice-President of the European Commission. 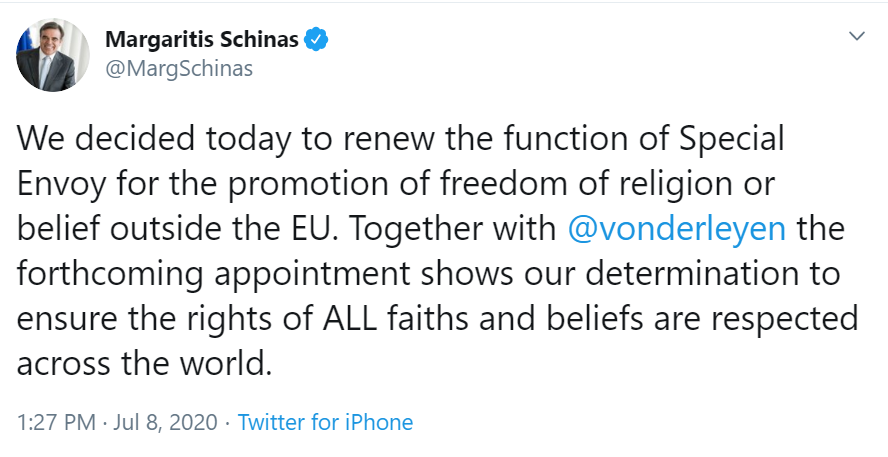 The pressure of many groups and individuals asking the European Union to renew the mandate of its Special Envoy to promote Freedom of Religion or Belief (FoRB) outside the EU has had an effect.

After months of silence, the European Commission announced it will finally renew this position, which had remained with no effects since the term of Jan Figel’ came to an end in November 2019.

“We decided today to renew the function of Special Envoy for the promotion of freedom of religion or belief outside the EU”, the Vice-President of the European Commission Margaritis Schinas announced on Twitter.

“Together with [President of the European Commission] Ursula von der Leyen, the forthcoming appointment shows our determination to ensure the rights of ALL faiths and beliefs are respected across the world”.

We decided today to renew the function of Special Envoy for the promotion of freedom of religion or belief outside the EU. Together with @vonderleyen the forthcoming appointment shows our determination to ensure the rights of ALL faiths and beliefs are respected across the world.

For over half a year, the new EU administration led by Ursula von der Leyen had given the impression that the Special Envoy of FoRB was no longer seen as a priority.

In this context, the surprising announcement has been welcomed as good news by politicians, human rights groups and religious freedom organisations such as the EPRID (European Platform Against Religious Intolerance and Discrimination). All of them had fervently asked the EU not to forget the promotion of freedom of religion or belief outside its borders, saying the role created in 2016 had had an important impact in helping protect minorities in third countries.

The European Evangelical Alliance told Evangelical Focus  recently that “not renewing the mandate of the EU Special Envoy would give the wrong signal to those countries were FoRB is currently at risk”. The evangelical body's Brussels Representative, Arie de Pater, underlined that “across the globe, both religious and non-religious groups are facing limitations of their freedom”.

The President of the People’s Party in the European Parliament, Manfred Weber, welcomed the announcement: “We pushed for it (…). Freedom of religion is under pressure in the world, whether for Christians in China or Muslims in India, Europe must do more to protect this fundamental freedom”.

Other German parliamentarians had also signed a letter asking the EU not to ignore the need to promot FoRB in the rest of the world as a key European value.

For now, no name has been presented as a candidate to be the next EU Special Envoy on this matter. Another important element will be to know what resources are assigned to the position.