Evangelicals in Europe concerned about association with US Trump supporters

“Trump’s time in the White House has impacted many, reaching far beyond the shores of the US”, writes Gavin Calver of the Evangelical Alliance United Kingdom. 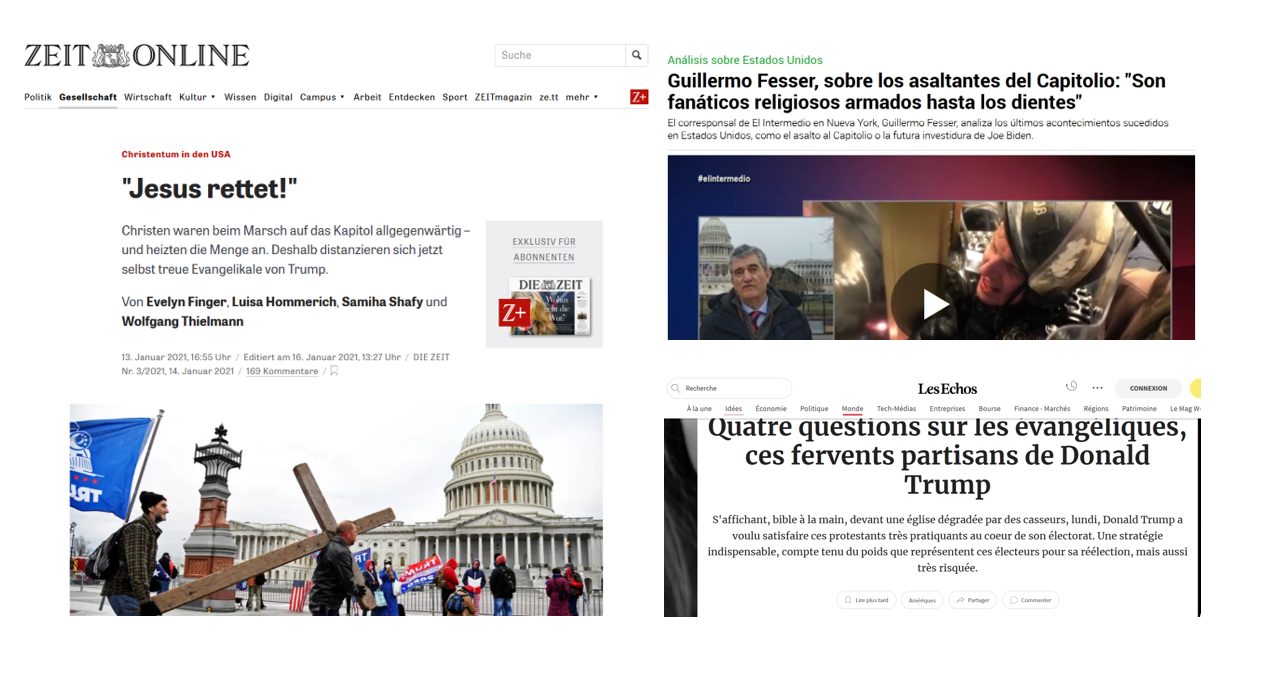 Headlines of media articles in Germany, Spain and France, addressing the connections between evangelical Christians and President Trump. / Zeit, La Sexta, The Echoes

The violent incidents in Washington D.C. at the beginning of the year have been widely followed outside the United States. In this context, the term “evangelical” has been often used to describe loyal Trump supporters.

In Europe, articles in general media outlets have included headlines such as: “Capitol rioters were armed religious fanatics” (La Sexta, Spain), “Four questions about evangelicals, the fervent supporters of Trump” (Les Echos, France), “Jesus Saves – Christians were omnipresent in the march to the Capitol” (Zeit, Germany) or “From Billy Graham to Donald Trump - the masculine ideal of the Christian right” (Vart Land, Norway).

The labelling of evangelicalism as a right-wing nationalistic religious movement has also been frequent in the United Kingdom, the European country with strongest cultural ties with the US. Church leaders in the UK have been increasingly uncomfortable with such stereotypes.

“Trump’s time in the White House has impacted many, reaching far beyond the shores of the US”, wrote Gavin Calver, CEO of the Evangelical Alliance United Kingdom (EAUK) in a column for the British newspaper The Times a few days ago.

In the last four years, “British evangelicals became associated with a form of Christianity thousands of miles away, a Christianity we have no influence over and limited engagement with”, he says. 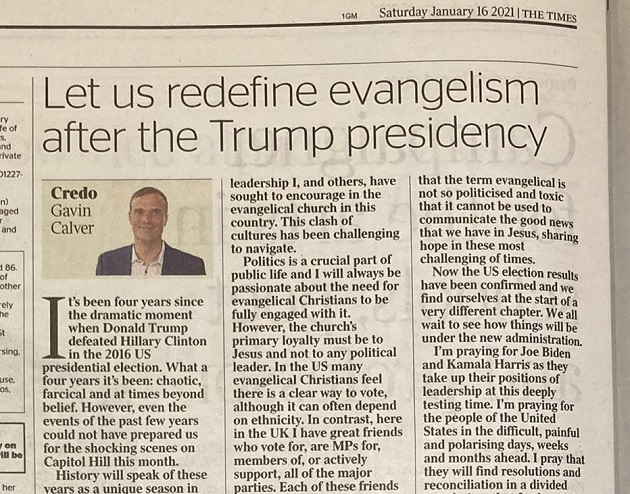 The article by EAUK CEO Gavin Calver on The Times, 16 January 2021. / Twitter @agu_irukwu

He gives an example of the confusion over the term “evangelical” in social media. “I can find myself tweeting about a food bank serving in Bradford, only for someone on the other side of the world to lambast me for being a Trump supporter. How did it come to this? How has the word evangelical been so politicised?”.

As the leader of an organisation that works to unite evangelical churches for common action in society, Calver is not against exploring connections between faith and politics. But “marrying the two closely as we have seen in the US has been hugely problematic and often painful to watch”.

The “brash style” of the US President’s messages, writes Calver, has been “in stark contrast with the kind leadership I, and others, have sought to encourage in the evangelical church in this country (...) This clash of cultures has been challenging to navigate”.

The English evangelical leader sees the unwavering support of a majority of evangelicals for certain political parties or ideologies problematic. “Here in the UK I have great friends who vote for, are MPs of, or actively support, all major parties. (…) There is no concept of a ‘Christian vote’ on this side of the pond”.

“I hope we can move past the linking of the word evangelical to a particular president or party”, because “evangelical describes roughly 600 million people globally, the minority of whom live in the US”.

After admitting that evangelicals have at times also had a bad reputation in the UK, Calver concludes by saying that he hopes that the term “evangelical” will “no longer be toxic but an expression of grace, redemption and healing”.

Evangelicals presented as a ‘US religion’

This poorly informed view has led to misconceptions and stereotypes, which went from defining evangelical churches as “cults” to identifying evangelical theology with teachings such as the so-called 'Prosperity Gospel'.

Recently, this lack of knowledge led the French Citizenship Minister, Marlène Schiappa, to claim that “there are more and more families who are influenced by evangelical trends from the United States, which ask, as in the United States, for virginity certificates”. The Council of Evangelical Christians in France (CNEF) categorically denied this accusation and asked the government representative to apologise.

Published in: Evangelical Focus - europe - Evangelicals in Europe concerned about association with US Trump supporters