The photo of Trump and the Bible

Trump and his misuse of the Bible are a distraction in the challenging task of inviting people to approach the Word of God without prejudices. 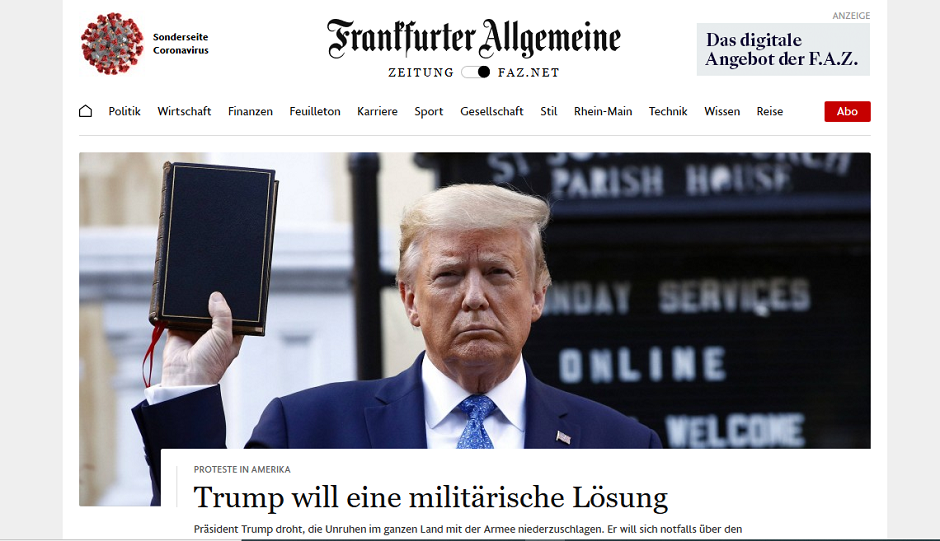 The main picture of the Frankfurter Allgemeine Zeitug (Germany) on 2 June. / Screenshot FAZ

One picture has appeared in news services around the world today: Donald Trump holding a Bible in front of a church building in Washington D.C.

What is the context of the photo? The night before, the protests in the capital city of the United States over the death of George Floyd (the 46-year old African American man who died in Minnesota while in police custody) had ended in riots. At a certain point, a group of people painted graffiti on the walls of St. John’s Episcopal Church (an emblematic temple traditionally frequented by US presidents) and caused a serious fire in the ground floor of the church building.

The following day, Donald Trump announced in a press conference strong measures to put an end to the protests: “I'm dispatching thousands and thousands of heavily armed soldiers, military personnel and law enforcement officers to stop the rioting, looting, vandalism, assaults and the wanton destruction of property”. As he was finishing his address, he added: “And now I’m going to pay my respects to a very special place”.

He then went by foot to St. John’s, just in front of the White House, amid huge security measures. To clear the way for the President, protesters on the street were tear-gassed. Once he arrived, Trump stood in front of the temple for some minutes, holding a Bible in his hands. The General Attorney and his daughter Ivanka were with him. After taking the photos, he left the place again.

The death of George Floyd has led to a severe crisis in the US that is being followed closely in the rest of the world. Analysts say the protests of the last week are a consequence of decades of discrimination and racism, especially in the field of law enforcement.

In the last days, dozens of evangelical leaders in many cities have expressed their sorrow. They have called to act with compassion, foster dialogue and work for real justice that leads to peace.

They are convinced that the Bible has much to say about how to handle a crisis like this, and that reconciliation can be achieved where there has been pain and disagreement. 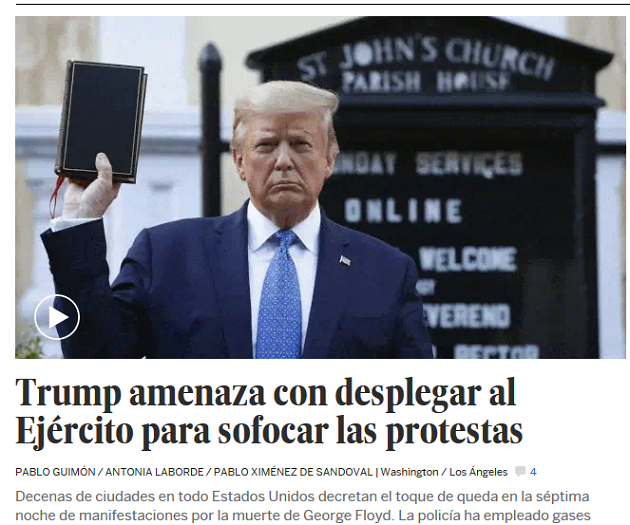 A photo that overshadows other messages

But the message that everyone has seen is that of Trump showing his Bible to the cameras as if the book was some sort of amulet - or even worse, a symbol of a culture war.

The image was featured in the British The Guardian, in the German Frankfurter Allgemeine Zeitung and the Spanish El País, just to mention some European newspapers.

It is here in Europe that many struggle to understand why a political leader would use the Bible to make a political statement about a crisis that is dividing the country.

Was Trump trying to say that the Christian faith could make a difference in this situation? If this was the case, then walking to a church and taking some photos is far from enough to find a solution.

But Trump was probably just trying to link the Christian faith to his political agenda, minutes after defining himself as “the President of law and order”.

A message that harms gospel witness

It is not the first time a US president is associated with the ‘evangelical world’. But Trump is probably the one who has played the card of “American Christianity” most to support his own policies, many of which have been openly opposed by Christians both in the US and elsewhere.

Trump often boasts about the many spiritual advisors that are invited to the White House, but they seem to be unable (or unwilling) to stop the president when he is tempted to use God as a just another political weapon.

British newspaper The Guardian also placed the photo of Trump and the Bible in its online edition, on 2 June. / The Guardian

Many who work for reconciliation around the world (in contexts very different to that of the Unites States) will have to respond again to questions such as, why does the Christian president of the US neglect the intrinsic gospel values of humility and grace?

It all could be very different if Trump took the Bible more seriously. What would change if he read in the gospels about how Jesus Christ approached those who were distressed, hurt - and even those who used violence to respond to injustice (John 18:10)?

The task of inviting people to read the Bible

Trump and his misuse of the Bible are one more distraction in the challenging task of inviting people around us to approach the Word of God without prejudices and distortions.

But we do not give up. We have experienced the capacity of this book to connect with the deepest longings of those who dare to face its pages with sincerity. By reading the the Bible, God himself talks to us about justice, reconciliation, an lasting peace.

Published in: Evangelical Focus - News desk - The photo of Trump and the Bible