‘We defend freedom of conscience and the freedom to be offended’

Jaume Llenas on the aims and motivations of the statement released by Spanish Evangelical Alliance regarding the LGBT bill that will be discussed in September in the Spanish Parliament. 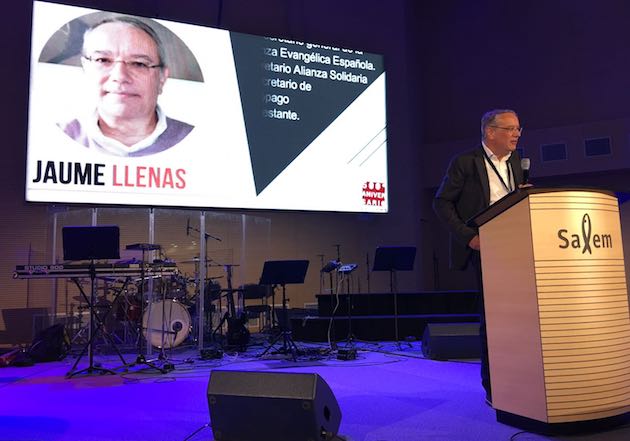 The Spanish Evangelical Alliance (AEE in Spanish) has done an exhaustive analysis of the LGBT Non Discrimination and Equality Bill to be discussed in September in the Spanish Parliament.

They have decided to release a statement regarding this issue, because they believe that, if the bill is approved in its current wording, there will be a serious limitation of freedoms for all citizens.

An interview with Jaume Llenas, secretary general of the AEE, about the aims and motivations of this statement.

Q. Overall, what are the main problematic issues of the proposed law, according to the AEE?

A. First, I must say that as Protestant Spanish Christians we know very well what it means to be persecuted in Spain.

For this reason, and also because we are Christians, we must be especially sensitive to all disadvantaged groups, as the Bible says: the widow, the poor, the stranger. And so it has been with the LGBT group for centuries in Spain, which has experienced great difficulties.

But what we discuss is that whether this proposal of law is an adequate instrument, when it converts discriminated groups in privileged groups; specially when today it is doubtful whether this is the group that is most at risk of suffering discrimination.

We ask whether there is a need to make this kind of law; not the protection of their rights (which is desirable for any group in society), but to block any opinion that is not favorable.

What worries us the most is that this puts at risk the freedom of speech, freedom of conscience, as well as the education and equality of all citizens.

It is not something that only affects Christians, but all citizens. Fundamental freedoms are a very sensitive issue, and when they are damaged, that affects the whole society.

Q. It is important to say that the alarm for this bill is not related to a position for or against sexual diversity. The LGBT groups present the bill as a matter of love and respect, and see homophobia in your statement, but the basic problem of this bill is not the debate about sexual practice, is it?

A. No, we talk about the rights of all, and the statement must be read carefully. We want that every person is able to be faithful to their conscience and not be percevied through prejudices by their ideas, nor by their sexual orientation.

But this bill wants to turn an ideology into a truth that is not debatable. And no law should turn a particular opinion into the only accepted point of view. Laws should not indoctrinate people, they should avoid imposing a certain worldview whatever this is.

That is why freedom of speech and conscience of all are at risk.

Q. However, gender ideology is criticised because it is being imposed without foundation to the whole of society.

A. Gender ideology is a possibility. The law should protect that each person lives sexuality the way they want, and not only in a certain way.

This contradicts the very idea of the gender ideology that sexuality is "fluid", by preventing prevents any possibility of returning to cisexuality.

Q. Perhaps it is important to clarify that the mission of the State and of the laws is to respect diversityin all its forms, but not necessarily to promote diversity in a certain way.

A. Diversity exists because people are different. The State must not harm diversity, not only in sexuality, but also in politics, the vision of life, etc.

But this bill only allows one kind of sexual ideology, establishing a uniformed, and not diverse society.

This often happens on many topics. Diversity is attacked by totalitarian regimes, everyone must think in the same way, therefore diversity is annulled.

A bill like this is not progressive even if it is labeled like that, because it does not promote the progress of society, it does not make a more just, more free society.

Any opinion that differs with gender ideology is taken as homophobic. Protestants accept and understand those who disagree with our vision of faith and life. We understand that it is because they think differently and we do not think they hate us just because of that

But a new orthodoxy is being created and mechanisms are being articulated, including "political inspectors" if this bill succeeds, which will be judge and a part of this new orthodoxy.

It is healthy that any lifestyle is open to criticism, even the Christian lifestyle.

Q. One of the issues that the statement mentions are the benefits that will be given to people who define themselves as LGTB, which will mean they have more priviledges that the rest of citizens in terms of rights.

A. The bill creates unfair disadvantages in the labor market, or in the right of asylum, where LGBT groups will be a priority.
When we talk about equality in Spain, we only mention the LGBT groups, but there are many other groups who are treated unfairly.

Another problem is how to prove that you are LGBT, so that you can recive those advantages. What evidence will be asked in the jobs? Will you need to belong to an LGTBI entity? How will one know if you are or not an elegible LGBT person for these special rights? And, are these entities really representative of homosexuals, transexuals, etc? Who will elect the representatives of these groups? Will there be elections as for the trade unions?

Q. Another delicate issue is the education of the children regarding this area, which will become competence of the State, the parents would not be able to decide what kind of values will be taught to their children in areas like sexuality.

A. There is a real danger there. The powers that want to be absolute always want to control the education of children. We should encourage true diversity in the schools. We cannot reduce the thinking that is taught to children.

On the other hand, whose are the children? To they belong to a family or to the State? The State acts by delegation, and should favor the diversity of criteria.

The State is not Catholic, not atheist, not fascist... It is the place where you can grow protected, not matter what option you choose.

The state must be neutral, and never be a "father". It seems that the State distrusts parents, but the question can be asked the other way around: how to trust in the values transmitted by a State?

The State must reinforce the role of the family, regardless of the vision and values that each family has. The ideology of the State should be formed by all ideologies. All that diversity is what forms a country, a State which should favor coexistence.

If that does not happen, we fall into totalitarianisms and dictatorships.

Q. Even the decisions of minors who express gender dysphoria must prevail over the parents' criteria, when scientifically 90% of these children recover their biological sexual identity as they overcome adolescence.

A. The problem is that the bill is based on an ideology, which at least is questionable, apart from believing to be right or not.

And in that case, who will be responsible when the boy or girl did not have the criteria to make such decisions?

We should not take things lightly, especially in these situations that are not reversible.

Additionally, while professionals in psychology or psychiatry can help them move from biological sexuality to another type of sexuality, the law prohibits receiving assistance in the opposite direction , under penalty of fine or even loss of the professional license.

Q. Another issue is the question of freedoms, both in the media and in any form of expression, which will be controlled if this law is approved. To what extent will this bring changes?

A. The freedoms are at serious risk. “Political inspectors”s can reappear in schools and/or the media.

And that position would only be for them, not for other groups, like the gypsies, refugees, or even evangelicals, who are caricatured or ignored constantly.

We must keep the freedom to be offended. I prefer to be offended, even if it hurts me, than coming to a point in which one has to look around to see who is there before speaking.

I do not want to offend anyone, but I do want to preserve freedom of expression that is much more important than not listening to opinions with which I disagree.

Q. The AEE is collecting signatures of support to its statemet. What do you aim for?

A. We hope to move consciences, and being active. We are not against the LGBT groups, or Podemos (the political party that presented the bill in the Spanish Parliament). We are in favour of freedom of opinion.

We will take the signatures to all parties represented in parliament, so that fundamental rights will not be broken. We do not want to impose a vision, but to prevent the limitation of true diversity, in which there everyone has the same rights and duties.

Q. Do you want to add anything else?

A. We need a lot of help. We have not raised our voice just for ourselves, but for all the Spanish citizens.

We must promote liberties that have cost us a lot, and now we must keep them so that we can all say what we think. Not to be homophobic, but to be able to dissent, debate and dialogue in freedom. Not just in the church but in all of society.

Published in: Evangelical Focus - life & tech - ‘We defend freedom of conscience and the freedom to be offended’