You can tell most of them are not religious people. But now, everybody prays. They say, “We have no hope besides God”. 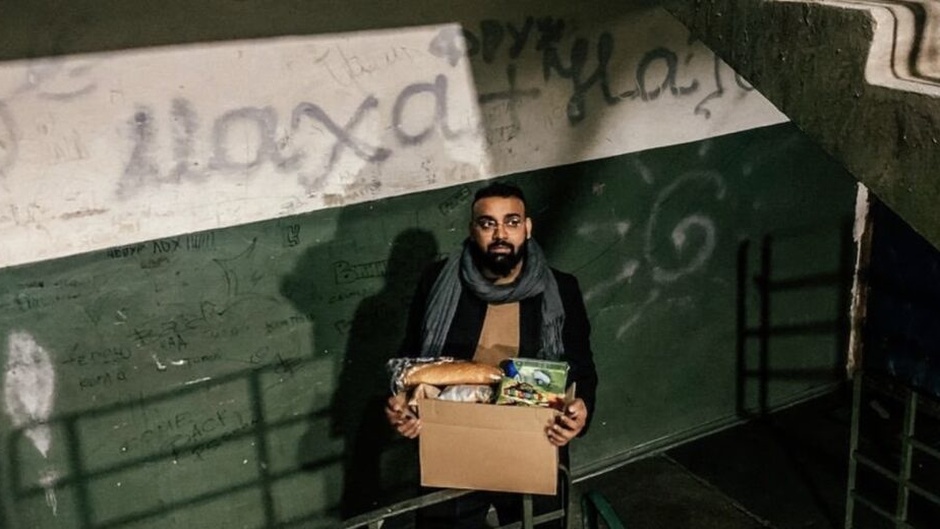 ‘Imagine if every second a person in your town would leave. In your own household: Imagine seeing half your own family leave. Kids and parents would leave, grandparents would stay. In your neighborhood: Those who are well-to-do would leave first. Those who know a foreign language, have a business, a good education.

‘Try to picture who would stay back. In Ukraine, it’s the old generation. The lonely grandma who grew up during WWII and the rule of the Soviet Union. Not yielding to one more dictator trying to take control of her life. Others take their family members in‘.

Marie, writing from the YWAM centre on the banks of the Dnieper River in Kyiv, graphically describes how it is to survive in a nation under brutal and unprovoked attack.

YWAM centres in Ukraine have been commissioned by city mayors to receive literally thousands of displaced people, offering shelter, food, clothing and medical supplies driven in from other YWAM centres across Europe, helping them on their journeys further westward.

These include grandmas with grandchildren; old men and women, some in wheelchairs; traumatised people; pregnant women without husbands. YWAMers are also involved in providing daily necessities for those trapped in bomb shelters and homes with no other place to go to.

Marie describes a Kyiv where sons and husbands are away defending their homeland, their jobs now gone. ‘Businesses say, “We are no charity organization, we can’t pay if there’s no work”. So grandma’s pension suddenly becomes the only source of income for many families.

Just to give a figure: an average pension in Ukraine is around €80. Meanwhile, due to food insecurity, prices have risen up to 50%. We bought tea for almost €4 per package yesterday. You need a lot of imagination to picture a family living on their grandma’s pension these days’, she writes.

‘So our phone does not stop ringing. Today, we were called to an apartment building to deliver fifteen food boxes. It felt completely abandoned. People would not open the doors. We could hear the white noise of the television inside. But they would open only once we called on the phone. They are afraid to open the door.

Too many reports about Russians infiltrating, looting, and violating residential areas. They are afraid to go out. Too much noise in the sky. So they just sit inside and wait for some kind of salvation.

All of them pray. You can tell most of them are not religious people. But now, everybody prays. They say, “We have no hope besides God”.

‘Every second a person left Kyiv. Two million! More than the city of Philadelphia or Hamburg. You see it in the empty balconies by day. You see it in the dark windows at night. You see empty parking lots. Closed shops. Abandoned construction sites. Abandoned grandparents. It feels like exile. It resembles Israel’s exile in Babylon, with only the poorest people of the land left (2 Kings 24:14).

Marie recalls the remnant left in Israel after a brutal invasion. And how Jesus started his ministry, not with the religious elite in Jerusalem, but on the fringes, in ‘Galilee of the Gentiles’: the people living in darkness have seen a great light; on those living in the land of the shadow of death a light has dawned (Matthew 4:15).

This is what gives her hope for Ukraine today, she writes. ‘Not a shallow hope in the power of arms or allies. Not a hope in political or national ideas. But hope in my God who does not put to shame those who trust in Him’.

Seeing all the abandoned houses and neighborhoods resembling ghost towns makes her think of Jeremiah. ‘As Jerusalem was under siege, God asked him to do a crazy thing: to purchase a plot of land. I often thought about this during the last few days. People just want to leave. It would be the craziest thing to purchase a house now. Everything seems to be doomed for destruction. As if we are just waiting for the verdict to be carried out.

‘As missionaries, my husband and I never wanted to have a house or settle down too much. But these days something in our hearts sparks with excitement when we think about Jeremiah’s plot of land. It was more a prophetic act than a purchase. Then the word of the Lord came to Jeremiah: I am the Lord, the God of all mankind. Is anything too hard for me? (Jeremiah 32:26).

‘I pray that all of us would have a portion of Jeremiah’s faith. Of building houses and purchasing land in a war zone. Knowing the hope it will bring and the faith it shows to the world far exceeds the price we paid. If we had some savings, I would actually go and buy a small house in the neighbourhood nearby. Just to show that I have hope. For this nation, for the people, and for God’s kingdom’.

Jeff Fountain, Director of the Schuman Centre for European Studies. This article was first published on the author's blog, Weekly Word.

Published in: Evangelical Focus - Window on Europe - Letter from Kyiv