Donald Trump, President of the USA

“We will deal fairly with everyone, we will seek partnership, not conflict”, he says in his first speech. Evangelicals have voted overwhelmingly for him, surveys say. 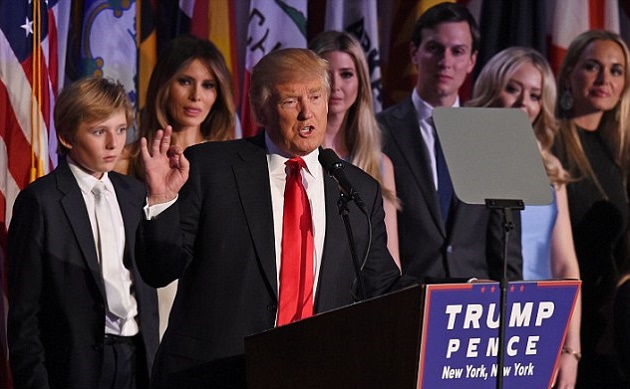 Donald Trump's first speech after knowing he will be the next PResident of the US. / AFP

Donald J. Trump will become the next President of the USA. The Republican candidate did not have much support in his own party, but was able to beat the favourite, Democrat Hillary Clinton.

Trump and his running mate Mike Pence won after receiving 48% of the votes, and getting 290 electoral votes (270 are needed to win).

Clinton and Kaine got 47% of the votes and 228 electoral votes.

Although many influential evangelical leaders in the country called not to vote for Trump, surveys suggest that the majority of church members trusted the Republican candidate.

According to a survey published by Christianity Today, 81% white evangelicals have voted for Trump, and only 16% for Clinton. According to Pew Research, this vote for the Republican candidate was more against Clinton than for Trump.

After a very confrontational campaign, Trump said he would now work for unity. “For those who have chosen not to support me in the past, of which there were a few people, I'm reaching out to you for your guidance and your help so that we can work together and unify our great country”

IN the first speech after the victory, Trump described the people who have voted for him as “a movement comprised of Americans from all races, religions, backgrounds, and beliefs, who want and expect our government to serve the people, and serve the people it will.”

“Working together, we will begin the urgent task of rebuilding our nation and renewing the American dream. I've spent my entire life in business, looking at the untapped potential in projects and in people all over the world.”

“It is going to be a beautiful thing. Every single American will have the opportunity to realize his or her fullest potential. The forgotten men and women of our country will be forgotten no longer.”

WHAT CAN THE REST OF THE WORLD EXPECT?

The new political leaders of the US briefly talked about his future relationships with other countries. “I want to tell the world community that while we will always put America's interests first, we will deal fairly with everyone, with everyone. All people and all other nations. We will seek common ground, not hostility; partnership, not conflict”, he said.