Hundreds of thousands marched for life and family in Argentina

“The response of pastors and churches was excellent”, says promoter of the marches Hugo Marquez in an interview. 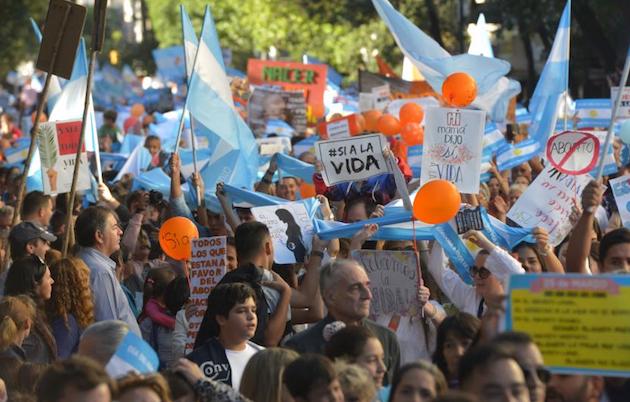 On Sunday, March 25, marches in favor of the protection of the unborn were held in more than 200 cities of Argentina, convened by several pro-life platforms.

Tens of thousands of people gathered in each of the biggest cities - two million throughout the country, according to the organisers. They marched to defend the right to life of the unborn child, opposing legal abortion and urging the Argentinian government to promote extensive family protection policies.

The marches, which coincided with the Day of the Unborn Child, took place in the midst of a social debate on abortion, whose legalization is being discussed in the Congress.

The movement has been propelled by evangelicals, but the Christian churches have managed to bring together people of all kinds of beliefs that share the same values regarding the defense of life and family.

Hugo Marquez, pastor of a church in Neuquen and director of an educational institution, is the promoter of this movement, that overflowed the expectations.

Marquez told Spanish news website Protestante Digital about the Argentinian debate around the new abortion law and the initiatives of Christians.

“The march itself did not need so much preparation since previously we had been holding talks, correspondence, personal contacts, abundant whatsapps with information about gender ideology”, he explains.

Then, “at a Conference for pastors in my region, I met with the presidents of the pastoral councils and they accepted the challenge. Everything I prepared for my city was going viral. Quickly, several pastors friends who have schools and know the problem, joined”.

“Suddenly we had 70 cities. A pastor from Buenos Aires joined to help us with data collection, and we soon realized that this was unstoppable. We finally reached 222 cities across the country”, Marquez says.

‘YES TO LIFE, YES TO THE RIGHT TO BE BORN’

Under the slogan 'Yes to life, Yes to the right to be born', the organisers “focused specifically on defending the life of both the woman and the child; and to declare that there are not many genres, scientifically, genetically and biologically there are only two sexes: XX and XY. According to the Scriptures there are also two: male and female, and He created them”.

However, “unfortunately I have to say that the official organisations that represent us reacted late and weakly. The issue of abortion and gender ideology has not been a priority on their agendas”.

When it comes to media coverage, “some media were faithful to the facts and highlighted the large and massive mobilizations throughout the country; but others, conditioned by their ideology, rather than informing, have disguised and minimized the facts”.

The new Argentinian abortion law “proposes that every woman has the right to decide voluntarily, without further condition, the extermination of the life of her child, during the first 14 weeks of her pregnancy”.

In addition, the law will allow “an abortion, at any stage of the gestational process, in case of serious fetal malformations, as well as when the woman is at risk of physical, mental or social health”.

“Any woman who claims to have been raped, only with an affidavit in front of the doctor, without a judicial report against the rapist or the participants, has the right to abort”, the pastor explains.

Even “13 year old girls and older can have an abortion, without the consent of their parents or even without informing them”, he points out. 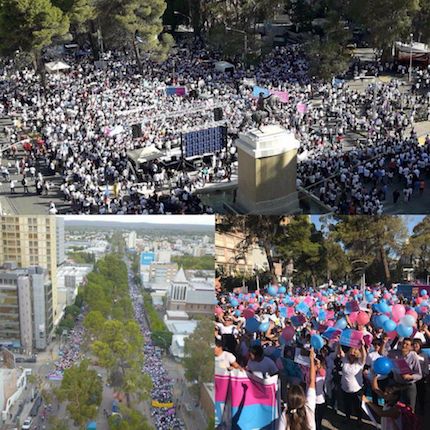 Marquez says the Argentinian government “has brought the gender ideology to all areas of government, and the most worrying is that they have also entered the educational structures through Integral Sexual Education (ESI in Spanish)”.

“They want to reset the minds of children, changing values and redefining what is sex, sexuality, marriage, and family”, he adds.

Marquez tells the example of his province, Neuquen, where “there is a Ministry of Citizenship dedicated, by mandate of the governor, to implement gender ideology in all areas of government”. The financial budget this ministry handles “is alarming”.

“In our school (with 1,500 students) they do not come to supervise how the children are doing in mathematics or humanities, or in art or sport. They come to supervise whether or not we implement, in all areas of education, their texts with the LGBTI seal”, he says.

“THE FUTURE IS ENCOURAGING”

Marquez believes that the future “is encouraging”, because “there is a change, the Church is awakening, it has stood up and is entering the legislatures. Evangelicals have even lost the fear”.

The Argentinian pastor encourages Christians to “stop stigmatizing politics as a sinful and polluting space for Christians, to leave the pharisaical spirit that fills us with fear and prejudice to join others, to establish alliances, and to see politics as a tool to redeem and put it at the service of the Kingdom, to raise consecrated people, missionaries sent to politics”.

Published in: Evangelical Focus - world - Hundreds of thousands marched for life and family in Argentina