“Pray for a peaceful way out in Venezuela”

Evangelical Christians in the country speak out about the situation. “It is our duty to make a call to prayer, to calm down and recognize the right of people to protest peacefully”, pastor José Piñero says. 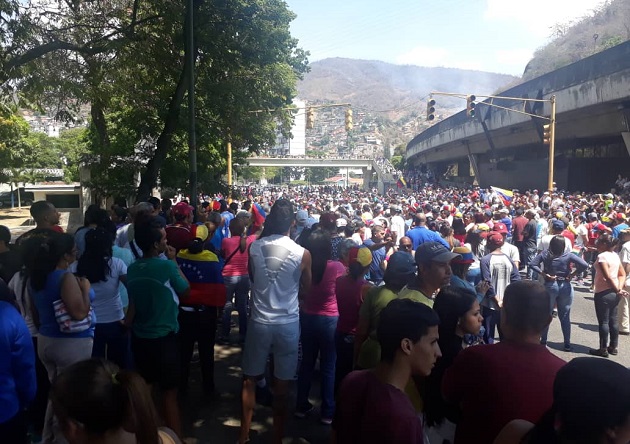 On Tuesday 30 April, Venezuelan opposition leader Juan Guaidó called the country to take the streets “to achieve liberty and democracy for Venezuela”.

He led the so-called Operation Freedom, which has been supported by the majority of the world political leaders. Chaos and uncertainty took over the streets of Caracas and there were clashes between demonstrators and military forces in several areas.

Venezuelan and Latin American evangelical leaders have reacted to the situation talking to news website Evangelico Digital, calling for prayer and unity.

JOSÉ PIÑERO: “PEOPLE HAVE THE RIGHT TO PROTEST PEACEFULLY”

Pastor José Piñero, of the Christian Front for the Defense of the Constitution and Democracy, told Evangelico Digital that the church “has the responsibility to guide its people to actively paticipate in society, avoiding isolation or getting away from the just claims that society has”.

“At this moment, it is our duty to make a call to prayer, to calm down and recognize the right of people to protest peacefully and seek the restoration of constitutional order in this country. It is a right that people have and as a church we are called to recognize it”, he added.

According to Piñero, “organizations in other countries have a very valuable opportunity to assert their influence. The churches can ask their governments to take firm actions to put and end to the evil in Venezuela”.

CARLOS VIELMA: “PRAY FOR A PEACEFUL WAY OUT”

Meanwhile, pastor Carlos Vielma, Vice President of the Union of Christian Churches of Venezuela, shared a video from the streets of Caracas, calling the Christian church worldwide to pray.

“It is important for all of the people of God to pray that we might  have a peaceful way out that allows us to regain freedom, justice, peace, and democracy”, Vielma pointed out.

NO OFFICIAL POSITION OF THE VENEZUELAN EVANGELICAL COUNCIL

Evangelico Digital also addressed the Evangelical Council of Venezuela (CEV) but, citing security reasons and prudence, given the seriousness of the events of this Tuesday in Caracas, this body decided not to officially speak about what happened.

Silence has been the tone of this organization in recent weeks and months. The Executive Director of the Latin Evangelical Alliance (AEL), Juan Cruz, supported the attitude of the CEV. “I have talked a lot with the leaders of the CEV, and we both agree that one needs to live in Venezuela to properly talk about is situation, and I do not live there”, Cruz said.

Therefore, he said, “I totally supports the attitude of the Evangelical Council of Venezuela to focus on prayer and wait on God, knowing that He will do His work”.

A WORLDWIDE CALL TO PRAY

“Our pain from the outside does not compare at all to the pain felt by Venezuelans. The Venezuelan church must follow the same steps that it has done so far, praying and helping each other to get through this hard and crucial moment”.

Regarding the role of the international evangelical church, Cruz said that “it should be dedicated to pray for a brotherly country, for the families, and it should also be supportive and hospitable to Venezuelans who arrive in its countries”.

“It is the right time for the church to give love, talk about Christ, so that they have hope and find comfort in Christ”, he concluded.

Published in: Evangelical Focus - world - “Pray for a peaceful way out in Venezuela”