A summary of the main statements by the prosecution and the defense of MP Päivi Räsänen and Bishop Juhana Pohjola. On the ground reporting from Helsinki, Finland.

On Monday 24 January, a much-anticipated trial began in the Helsinki District Court, in which the charges against Member of Parliament Päivi Räsänen and Bishop Juhana Pohjola of the Evangelical Lutheran Mission Diocese of Finland were heard. They both are accused of agitation against an ethnic group.

According to the prosecutor, Räsänen has insulted homosexuals in a booklet published by the The Luther Foundation Finland, in social media posts and in a radio programme by Finnish Broadcasting Company Yle. Pohjola is the editor-in-chief of the Luther Foundation's publications accused of displaying the booklet.

In addition, prosecutors are demanding that Räsänen and the Luther Foundation remove the text from the internet. Prosecutors also demand that Yle removes the indicted passages from Ruben Stiller’s radio interview with the Christian politician on the theme “What would Jesus think of homosexuals?”.

Räsänen and Pohjola deny the charges. Before the start of the trial, Päivi Räsänen stated that she was ready to fight to the end, going through all the courts if necessary. 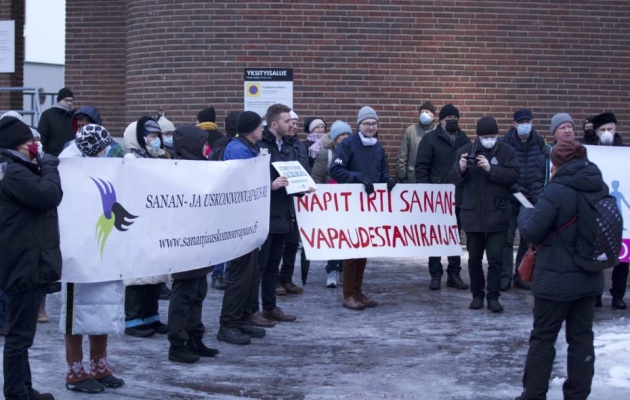 Early on 24 January, around 85 people expressed their support for Päivi Räsänen and demonstrated for freedom of speech and of religion. / Photo: Matti Korhonen, Uusi Tie.

“Simply quoting Bible passages would not be a crime”

Public Prosecutor Anu Mantila read excerpts from the booklet Male and female He created them. According to the prosecutor, Räsänen claims that immorality and child abuse are characteristics related to homosexuality.

“According to Räsänen, homosexuals should be considered inferior people. The statements violate the dignity of homosexuals and are likely to provoke contempt and hatred for them. Thus, they transcend the boundaries of freedom of speech and religion”, Mantila said.

Mantila also stressed that the lawsuit is not about how the Bible should be interpreted or what the Bible’s understanding of marriage is. “Räsänen and Pohjola are not here to be convicted of heresy before the Inquisition. Everyone gets to believe what they want. Freedom of religion and conscience includes the right to express one's convictions, but this freedom may be restricted in order to safeguard other freedoms”.

“Simply quoting Bible passages is not a crime. Instead, if someone interprets the Bible in a certain way and publishes their own opinions with reference to them, it can be a crime if they offend an individual or a group of people”.

The prosecutor also considered the views of the booklet to be internally contradictory.

“It seems that the author's left hand does not know what the right hand is doing. At the same time, it cannot be said that homosexuals have dignity and at the same time claim that they do not have it. Offense cannot be explained or eliminated by saying that everyone is a sinner and that Christ has died for everyone”.

According to the prosecutor, Räsänen’s statements are “a typical example of extremist Christian thinking”. “They represent a fundamentalist doctrine: ‘Love the sinner, hate the sin’. It is a logical impossibility to say that deeds are wrong, but being is not. To do wrong will inevitably be wrong”.

Räsänen’s lawyer: Distortion and factual errors in the prosecution

According to Päivi Räsänen’s lawyer, Matti Sankamo, the prosecution contains distortions and factual errors. In addition, the prosecutor has taken sentences from the 2004 booklet out of context.

“Contrary to what the prosecutor says, the booklet does not claim that one must get rid of homosexuality. Nor does the booklet claim that homosexuals are inferior as humans. Instead, it says that everyone should be treated equally, regardless of sexual orientation. Räsänen repeats this in the booklet and in the radio program”.

Päivi Räsänen in a pause of the 24 January trial in Helsinki. / Photo: Matti Korhonen, Uusi Tie.

According to Sankamo, one factor makes the prosecution very exceptional.

“To my knowledge, this is the first trial in Finland in which the defendant is alleged to have incited a group of people in a text in which she specifically urges readers to respect human rights”. Sankamo added that there are hardly any committed Christians in Finland who would not agree with the statement “Love the sinner, hate the sin”.

“The religious premise is that a person can be separated from deeds. If these were indistinguishable, it is useless to talk about the functional impact of religion”.

Partially obsolete information in the 2004 booklet

In her own speech, Päivi Räsänen said that a few months before she became aware of the crime report, she found a few copies of her old booklet, while cleaning the boxes. She acknowledged that the booklet contained outdated legal information and research data.

“However, it is a text that must have a right to exist. The basic premise of the booklet is that the biblical teachings in it are timeless”.

Räsänen was asked why she had distributed the booklet after a preliminary investigation had been ordered. “I thought it was absolutely necessary to publish it so that people would know what kind of booklet is being investigated”, she answered.

Räsänen categorically denied the prosecutor's claim that in her booklet she would combine a homosexual orientation with an orientation to abuse children.

“In my booklet, I talk more about sex education without values, which has led to an increasingly early stage of sexual experimentation among young people. This also enable adults, regardless of sexual orientation, to abuse children and young people”, Räsänen defended.

“The reason the booklet mentions boys here is because the subject of the booklet is same-sex relationships. I draw attention to the fact that boys may also be subject to this. Throughout my political career, I have worked to prevent the sexual abuse of children”.

The Bible talks about deeds, not identity

Päivi Räsänen also denied the prosecutor’s claim that a person should get rid of homosexuality.

“I haven't said that and I don't think so. The Bible speaks specifically of deeds, not of human identity”.

“It is completely contrary to my belief, because my Christian belief is that man is created in the image of God. Everyone is equal regardless of their characteristics or what they do. I consider these to be insulting allegations against both myself and homosexuals”.

Räsänen emphasised that all people are created by God, but also sinful before God. “I think the big problem is that one does not necessarily understand the basic view of Christianity that man is infinitely valuable, but also sinful, regardless of his or her sexual orientation”.

“The main purpose of the booklet was to encourage Christians to trust the Bible as the word of God. If this trust is lost, the core message of the Bible will be lost, namely, that Jesus has come to die for all and atone for the sins of all”.

“The prosecutor did not represent objectivity”

In his speech, Juhana Pohjola also criticized the prosecutor's view. “If one cannot distinguish between loving a sinner but hating sin, it will in practice narrow the law of God and the proclamation of the gospel”, he told the court. 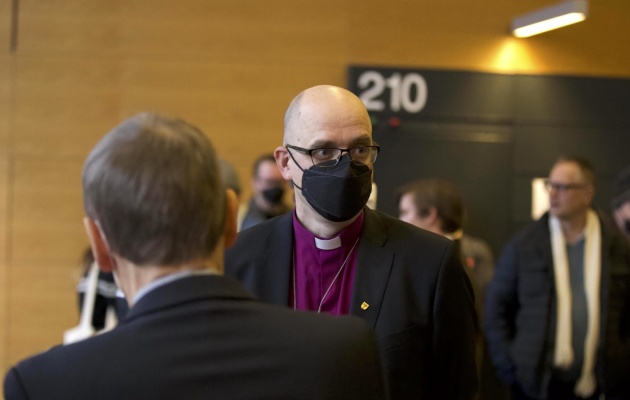 Pohjola was asked what the Christian response is to people struggling with sexuality. “Regardless of sexual orientation, everyone has absolute value. Everyone from conception to the last breath has undivided dignity. Those who want to are invited to follow the biblical path where sexuality is part of a marriage between a man and a woman”.

Finally, Pohjola commented on the prosecutors' use of language.

“Although prosecutors said that this is not about theology, they themselves spoke of it using pejorative expressions when speaking about fundamentalists and the narrow-minded, even though ours is a a mainstream Christian view of marriage. The prosecutor did not represent objectivity in any way in this case”.

As of Monday, the proceedings were closed at approximately 6 p.m, after eight and a half hours including pauses. The final statements were not heard and postponed to 14 February 2022.

This article was first published by Uusi Tie in Finnish and translated with permission.

Read the press release published by Päivi Räsänen after the hearing.

Read more information about the case.