The Baptist Union of Spain has been in Ukraine monitoring the delivery of humanitarian aid. Amid the need and pain, “the churches there are experiencing a revival”, says Daniel Banyuls. 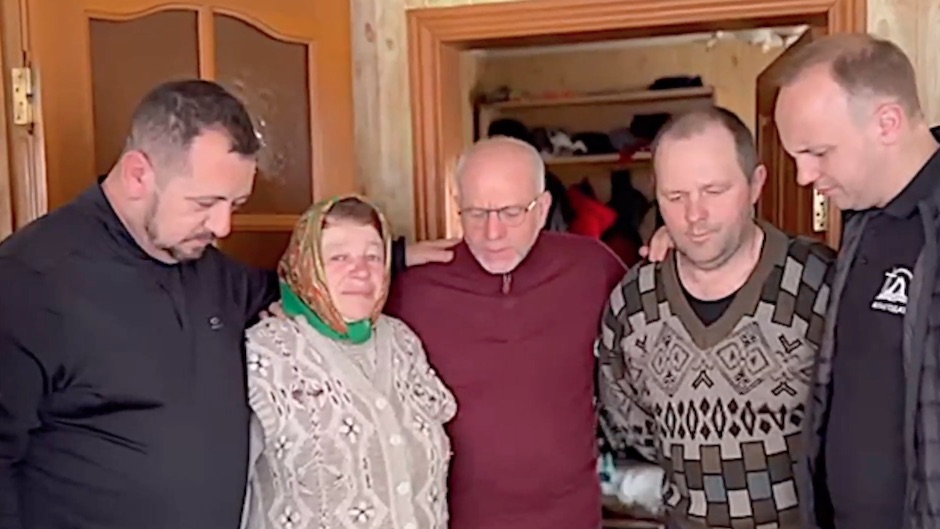 Spanish Baptist leaders praying with a family and volunteers in Ukraine. / UEBE

In recent months, evangelical churches and organisations have been actively involved in helping Ukraine.

Whether through support for NGOs working on the ground, the collection of supplies, financial donations or by opening their doors to welcome refugees, the difficult situation of so many people has moved the heart of the evangelical church in Europe.

One of the entities that reacted from the first moment was the Evangelical Baptist Union of Spain (UEBE). Through its Ministry of Social Work (MOS), 100 tons of humanitarian aid have been collected and sent from Spain in three trailers.

These goods, especially medicines and food, have been distributed in several parts of the country through the evangelical churches of Ukraine, whose humanitarian aid work and attention to needs is playing a key role during the invasion of their country.

Daniel Banyuls and David Bianchi, leaders of the UEBE, recently went with a team to Ukraine and stayed a week, to visit different villages, accompany the delivery of humanitarian aid, and also to talk, pray and embrace the victims of the attacks.

Spanish news website Protestante Digital spoke to them about their visit to Ukraine. 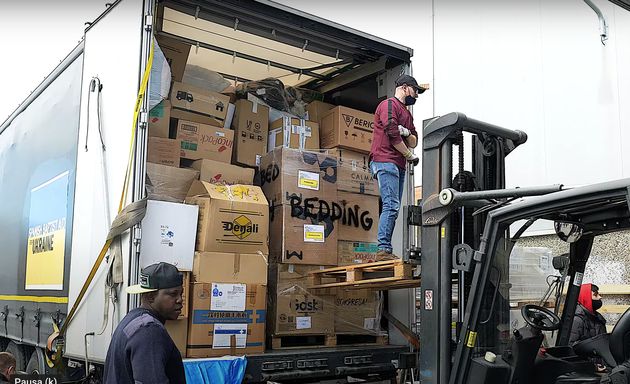 The UEBE has already collected and sent 100 tons of humanitarian aid from Spain. / UEBE

Question: How did you experience that week in Ukraine?

Answer. We have been in what they call "pacified territory". From the city of Rivne, we went to Irpin or Bucha, the cities surrounding the capital of Kiev. We have seen the distribution of humanitarian aid that has been collected since February. The three humanitarian aid trailers have arrived perfectly well and the Baptist churches have been both the recipients and the distributors of this aid.

The country is militarised, and it has been a complex visit, not only because of the situation but also because of the emotional state of the people.

Q. Is the reality you found better or worse than you expected?

A. To be honest, it is much worse than we expected. The press is focused on what we call the war, the military fight, whether the Russians are advancing, and we understand that this is the reason for the journalistic investigation. But what we have seen is the pain, the damage that has been done to the civilian population.

It has affected us very much, because of the terrible harm that has been done to the common people, the most defenceless: the women, the children, the elderly, the men who were not involved in military action.

The most vulnerable have suffered harm and humiliation from the Russian army, which has attacked the deepest part of their human dignity. It has been painful to see and to hear. We have been able to witness these situations with names and surnames.

Q. How has it been for the Ukrainian Baptist brethren to live through this situation?

A. They are still under the stress of the attacks. While we were there we could see bombings close to us. Christians are still suffering from the war, especially in the Donbas, but where we were, in the centre-west, we also saw missile attacks.

Christians are suffering like everyone else, with a lot of pain and anxiety, they are losing relatives. We have met brothers and sisters who have lost family members, some delivering food, others on the front lines.

The damage is the same for all, yet Christians are searching for the why, and seeking reconciliation and restoration, from a spiritual perspective.

Some of them are even under stress, so much contained anger, they reminded me of characters like Habakkuk who asked "how long is this situation going to go on", "why is this happening to us"?

But even when the threat is not over, it is surprising to see the strength and patience that defines the church in Ukraine. They have an amazing human quality, because in that context they want to help others.

They are helping their neighbours. The pastors don't want to leave the country, they are all staying to help their congregations. It is surprising to see such courage and strength. I have enormous admiration for what they are doing and the courage they are showing.

Q. How was the experience of visiting families?

A. We were able to accompany volunteers who have been distributing food and medicine for several weeks. We visited villages, especially around the city of Kiev, where there was heavy shelling.

We were there distributing food and accompanying those who have lost everything, even their loved ones. 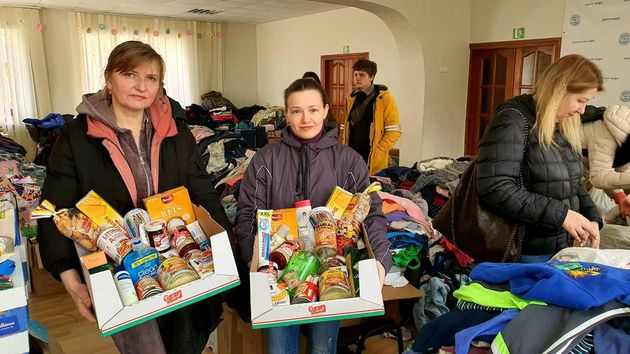 The majority of the people have lost everthing during the invasion. / UEBE

Q. Does the UEBE continue to collect supplies and funds to help?

A. We have returned thinking about what to do. Three full trailers have already been sent, with a hundred tons of humanitarian aid. But seeing that the need is still there and the war is not over, we think we have to keep the humanitarian aid going.

We continue with the bank account open and with the willingness to help. We will be working according to what we receive, be it financial or material resources.

We have also seen that it is possible to buy food on the ground, in various places that can provide the necessary materials, so we are already sending money for the churches to use it according to the needs they see. But at the same time we are still open to the possibility that more people can be added to the new deliveries that we will make from Spain in one more container.

Q. There has been a great response worldwide, but there have also been Baptist leaders in Russia who have spoken out against the war. Do you think this could pave the way for reconciliation in the future?

A. We ask ourselves a lot of questions about this. If it is from a spiritual point of view, we believe that God is a God of miracles, and this will be a miracle. But if we look at it from a more sociological perspective, it is something that takes us back to the Spanish Civil War. It makes us think that we have been in the post-war period for almost 80 years and it still seems, at times, as if it happened yesterday.

We believe that in this war the wounds will be very deep, very difficult to heal. We saw many people whose hearts were wounded. The losses are incalculable, and it is impossible to think that this can be forgotten. This is going to leave a lasting wound, which may take generations to get back to normal.

We have seen people who desperately needed to talk. When you listen to them, almost all of them tell the same story: their existential anguish, the horror they are going through, their personal dramas and the cruelty they have experienced. The sin they are living with. We believe that this is a long road to emotional recovery.

One of the positive things is that there is a spiritual revival in the country. All the churches are overflowing with people. They had not seen this in 20 years. There is a general search for God, out of the war and the pain. We trust that this will bring a sowing and a reaping. But I believe it will take a long time for the country's wounds to heal.

Q. Many Ukrainians arriving in Spain are also visiting evangelical churches. How are you dealing with this situation?

A. It is estimated that some 80,000 Ukrainians have arrived in Spain, and because of the significant proportion of evangelical presence in the country, several hundred or thousands must be Christians and are looking for churches where they can attend. This is a missionary opportunity for our country.

We need to pray for the Ukrainian church. One of the teachings that I have brought with me is that we must pray for the suffering church, the church that cries out to God, and also for the church that maybe does not cry out so much, and that is the prophetic church, the Russian church that is called to cry out against its government and its army and to call for the withdrawal of troops from a sovereign country.

We must pray for the Ukrainian churches and for the Russian churches. In the latter there are some honourable cases, but also many that are still silent, and others that are even endorsing the war. We must pray that God will touch their hearts and restore their God-given prophetic courage.

Published in: Evangelical Focus - europe - “We have seen terrible damage done to the most defenceless people in Ukraine”