The death of Mahsa Amini sparked protests across Iran. Christians inside and outside the country demand “an end to imposition and discriminatory laws”. 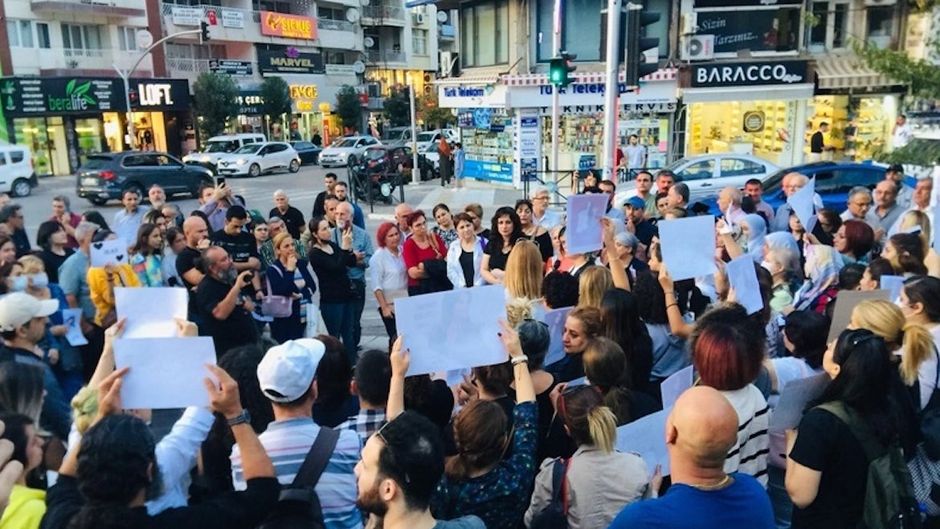 Christians rallied in Turkey in support of the demonstrations in Iran /Mohabat news.

Iran has experienced an unprecedented wave of street protests for almost a month, since the death of Mahsa Amini at the hands of the morality police for improperly wearing the hijab.

According to human rights NGOs, the protests have been massive with a strong presence of women and young people, and in some of them there have been repression and aggressions by the Iranian authorities.

Several international organisations have described the demonstrations, which were held in many cities across the country, as exceptional in a country where freedom of expression and demonstration is limited.

Ayatollah Khamenei spent a large part of one of his recent speeches denouncing a climate of hostility towards his government and its traditions, accusing external international actors - especially Israel and the United States - of being behind the demonstrations.

Many Iranian Christians, especially those in other countries, have publicly expressed their support for the demonstrations.

The Iranian Council of Iranian Churches in the UK, along with Pars Theological Centre and the religious freedom advocacy organisation Article 18, issued a joint statement denouncing “the brutal repression” of the Iranian authorities and calling Mahsa Amini's death a “government assassination”.

Thy stress that “like many of the people in Iran who have protested with unparalleled courage following Mahsa’s death, we consider the imposition of mandatory hijab on the people of Iran – representing a range of religious, ethnic and cultural identities – an obvious violation of human rights, and demand an end to this and other discriminatory laws”.

“We are all together, regardless of ethnicity, religion, language or belief, in this fight against the shared pain of injustice, oppression and religious dictatorship”, adds the statement.

They also “pray for the families of the victims of these crimes and seek God’s comfort and peace for them”.

“We also remind all our fellow Christians that standing next to the voiceless and oppressed, and standing up for their rights, in the manner taught us by the Bible and the teachings of Jesus Christ, is not a choice but the spiritual duty of every Christian, and a participation in the liberating mission of Jesus”, concludes the statement.

There is a large Iranian Christian community in Turkey, many of whom have left the Persian country in order to practise their faith in an environment of greater freedom.

The Iranian Christian news agency Mohabat News reported that there were demonstrations in the cities of Denizli, Manisa, Nowshehir and Istanbul, in which Turkish citizens also participated to support the Iranian uprising against the government.

There were demonstrations denouncing the repression in Iran in several Turkish cities./ Mohabat News

In some of those rallies over a hundred people gathered, chanting the same slogan of the demonstrations in Iran: “Women, life, freedom”.

The organisation for the defence of persecuted Christians, Open Doors, has also issued a statement expressing its “deep concern and sadness over the death of Mahsa Amini after she was detained by the country’s morality police for wearing `improper´ hijab”.

“We condemn the practices of the Iranian morality police that enforce conservative Islamic dress code and behaviour and use their power to punish anyone who does not abide by their religious standards”, they add.

The Christian entity is also concerned about “the increasing instability in the country over the past week as a result of Iran security forces’ violent response to the public protests against the government”, and urges the Iranian government “to respect its citizens’ right to protest peacefully”.

It warns that “the case at hand unveils a broader issue of Iran’s gross violations of international norms on freedom of expression, women’s rights and freedom of religion or belief, which affects many religious groups in Iran, including Christians”.

“We express our serious concern that Christian gatherings in private homes have been denounced as illegal groups and acts against national security while many churches continue to be closed. We urge the Iranian government to cease imposing criminal charges and imprisonment on these grounds and allow free exercise of worship to all religious groups”, points out the statement.

Open Doors also calls on the international community “to continue raising the issue of freedom of religion or belief and discrimination against women, with the Iranian government through diplomatic channels, and to insist on accountability of perpetrators of violations of fundamental rights”.