Several evangelical representatives participated in the Organization of American States Assembly. They defended religious freedom and the right to life. 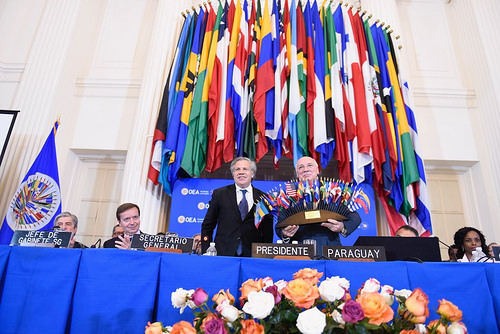 The closure of the Organization of American States 2018 Assembly, in Washington D.C. / OAS

The Organization of American States (OAS) held its 48th General Assembly, a political event marked by the crisis in Venezuela.

The Assembly is the executive board of the OAS and, among other things, decides the general action and policy of the organisation, determines the structure and functions of its bodies and analyses any matter of special importance in the continent.

This is the eleventh time that the OAS General Assembly is held at the headquarters of the organisation in Washington D.C (USA).

As reported by the Ibero-American Congress for Life and the Family, evangelicals have been attending the event in the last five years, invited by pro-life Catholic organisations, but this year evangelicals have participated more directly and with their own discourse.

Three coalitions formed only by evangelical Christians have been present in this 48th edition of the Assembly.

“Our voice will be represented by the Argentinian Pastor Hugo Márquez (Ibero-American Evangelical Congress Coalition), the Rev. Glacio Coraiola (Brazilian Coalition), and the Mexican Pastor Gilberto Rocha (Education and Culture for Democracy Coalition)”, the press department of the Ibero-American Congress, explained.

All these coalitions “integrate our brothers from Argentina, Guatemala, Bolivia, Peru, Panama and Mexico, but counts on the prayers and the support of the 23 Ibero-American nations of the Congress”, they added.

Evangelical leaders spoke about topics that are important for the Latin evangelical churches: the right to life (against the legalization of abortion, proclaiming the care of the mother and the unborn child), the rise of gender ideology, and the need to protect religious freedom, among others. 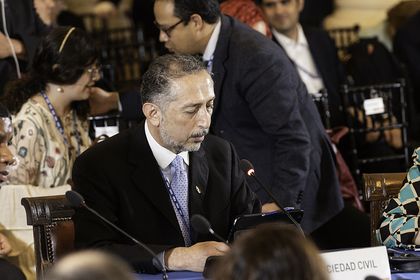 One of the most debated projects was the resolution on the promotion and protection of Human Rights.

The representatives of evangelical organisations and other pro-life and family goups, expressed their disagreement with the use of some terms of language that could threaten some freedoms or favor some groups over the rights of others.

One of the chapters of the resolution attacked the family, so that Guatemala and Paraguay firmly showed their opposition, and the paragraph was finally eliminated.

On the last day of the General Assembly, a resolution was voted to suspend Venezuela from the OAS, promoted by the US and presented a day earlier by the 14 member countries of the Lima Group: Argentina, Brazil, Canada, Chile, Colombia, Costa Rica, Guyana, Guatemala, Honduras, Mexico, Panama, Paraguay, Peru and Saint Lucia.

With 19 votes in favor, 4 against and 11 abstentions, the Assembly resolution declared that “the electoral process as implemented in Venezuela, which concluded on May 20, 2018, lacks legitimacy”.

They also urged the Venezuelan government “to take steps to guarantee the restoration of the full authority of the National Assembly and the liberties of the population, and to allow the entry of humanitarian aid”.

Venezuela has so far managed to avoid a formal condemnation of the OAS thanks to the support of the bloc of Caribbean nations that have benefited from its subsidized oil and development programs for years, in addition to its allies Bolivia, Ecuador and Nicaragua.

According to the Inter-American Democratic Charter, a State can be suspended from the OAS by two-thirds of the votes of the General Assembly.

In addition, the OAS published a declaration of support for Nicaragua, condemning the current situation and demanding “the immediate cessation of acts of violence, intimidation and threats directed against the general public”.

The statement “appeals to the Nicaraguan Government to demonstrate commitment and engage constructively in peaceful negotiation with clear outcomes that address the country’s fundamental challenges, including the strengthening of democratic institutions and the holding of timely, free and fair elections”.