New elections are due to be held on 23 March. “It is not so much a division over political ideologies but a referendum on Netanyahu's leadership”, Israeli evangelicals say. 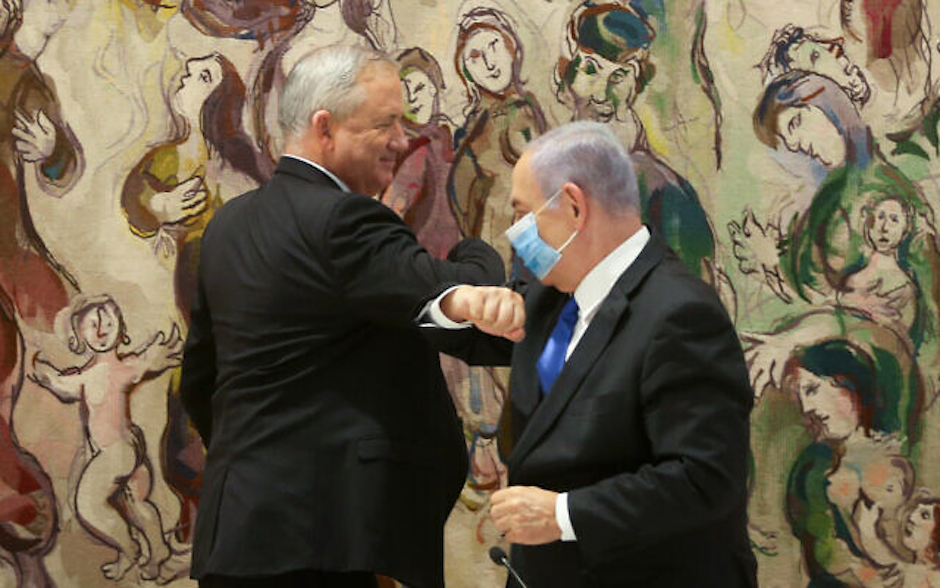 The unity between Ganz and Netanyahu only lasted for half a year. / Twitter

The budgets have hastened the end of the weak and short government coalition between Israel's two majority parties, the Likud of Prime Minister Benjamin Netanyahu, and Blue and White, of Deputy Prime Minister and Defence Minister Benny Gantz.

The lack of parliamentary consensus on approving the accounts has turned the May agreement that allowed to form the current executive, into a political anecdote. New elections are due to be held on 23 March. The fourth in the past two years.

The leaders of both parties have blamed each other. Blue and White stated that “with 800,000 people unemployed, at the height of the pandemic, [Netanyahu] did not approve the 2021 budget because of his judicial problems, and his only objective is to remain in power”.

The acting Prime Minister has reproached his hitherto government partner for “thinking only about rotation”, because, according to the Gantz agreement, he would take over the post of Prime Minister in November 2021, and accused the Deputy Prime Minister of “being opposition from within and dragging Israel into new elections”.

According to Gerald Steinberg, professor of political science at Bar Ilan University, “the unity coalition created after 3 elections that ended without a clear winner was never stable. As the agreed date grew closer for Netanyahu to turn over the Prime Minister position to the head of the Blue and White party, it was clear the government would collapse. The budget issue was the excuse, but not the cause”.

“Israel's democratic system has always been boisterous and a little volatile, with coalition governments that have almost never lasted their full four-year terms, but this level of instability is unprecedented”, the Secretary General of the Evangelical Alliance of Israel, Harry Tees, explains.

A referendum on Netanyahu's leadership

Experts and representatives of civil society agree on the special plebiscite nature of the new elections.

“People are tired, exhausted, overwhelmed, absent-minded, without a budget in the crisis of the coronavirus, and fed up with so many elections that are not ideological, but rather on the question of 'Netanyahu yes' or 'Netanyahu no'”, Arie Kacowicz, professor of the Department of International Relations at the Hebrew University of Jerusalem, told Spanish news website Protestante Digital.

The latest survey on voting intentions by the television station Keshet 12 shows that while Benny Gantz is expected to slump to a just five deputies, the fight for the control of the government will come from the former Likud deputy Gideon Sa'ar and his New Hope party, which, according to Steinberg, “could significantly weaken Netanyahu”.

Surveys put Sa'ar in second place with 19 seats, nine less than Netanyahu. He could have the support of the ultra-orthodox parties Shas and United Judaism for the Torah, which represent a total of 16 deputies and with whom Gantz has not been able to reach an agreement in any of the previous elections due to his secularist centre-left position. 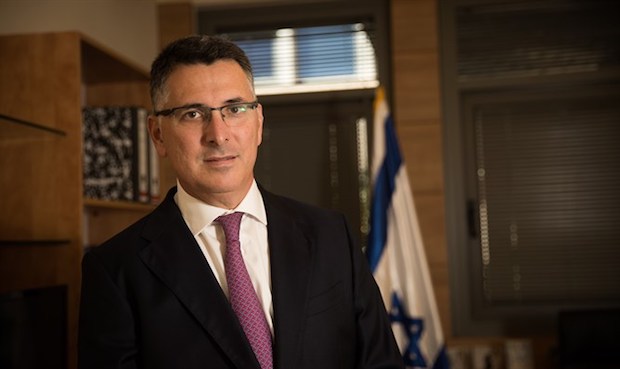 Gideon Sa'ar, the leader of the New Hope party. / Twitter.

“If Gideon Sa'ar comes to us with 45 deputies and we can complete a government, as opposed to Netanyahu if he comes with ten seats, then it is clear what is going to happen”, United Judaism for the Torah deputy, Isaac Pindrus, pointed out.

The leader of New Hope could also get the support of Yesh Atid, the party of the current opposition leader Yair Lapid, and of Avigdor Lieberman's Israel Beitenu, which are expected to have around 25 seats at the Knesset (parliament) between them.

“There is an advantage in this new development since, for the first time, there can be an opponent for Netanyahu from within his own ranks. It is not so much a division over political ideologies, but a referendum among the right wing on Netanyahu's leadership”.

Having held the position of Prime Minister continuously since 2009, in addition to the three years in which he previously held it from 1996 to 1999, the pressure on Netanyahu has not ceased to grow over the past year, despite the coalition government.

His prosecution for fraud and bribery in November 2019 sparked a protest movement which, along with the effects of the pandemic crisis, continues to mobilise hundreds of people calling for Netanyahu's resignation.

“The Prime Minister's popularity has fallen precipitously because of the corruption scandals in which he is involved. While investigations are ongoing, he has not been convicted yet, and his tarnished reputation has not diminished his popularity enough to allow other parties to form a coalition that could unseat him”, Tees says.

According to Kacowicz, in the election race for these fourth elections, “there may be a majority of deputies who are against Netanyahu, from the left to the right, so this time he faces a big electoral challenge”.

Elections in the midst of coronavirus vaccination

With unemployment at 4.7% at the end of the year, more than one point higher than in the first quarter of 2020, the elections are also expected to reflect the economic and social crisis caused by the pandemic.

“Without clear leadership, the socio-economic situation is gradually deteriorating. Long-term infrastructure projects are not being initiated, and necessary reforms in areas such as education and health are frozen. Israel is moving forward, but costs are rising”, Steinberg explains.

Th international policy is also a key point, specially whether the results will affect the latest agreements reached with countries such as the United Arab Emirates, Bahrain, Sudan and Morocco. “These agreements are supported by national consensus”, Steinberg recalls. 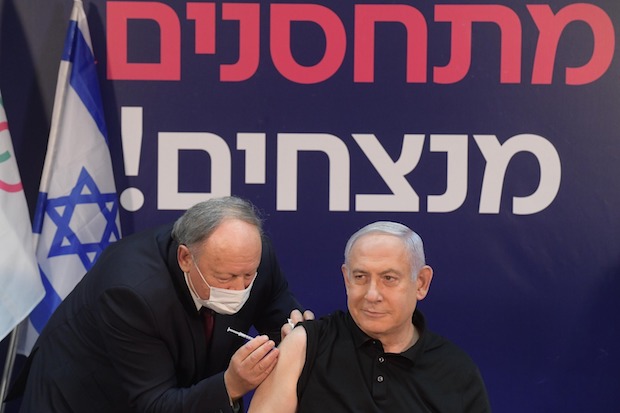 Netanyahu was the first to receive the coronavirus vaccine in Israel. / Twitter @IsraeliPM

The next elections will take place in the midst of the coronavirus vaccination phase and with many of the restrictions due to the Covid-19 epidemic still in place for Israelis. One of the innovations, for example, will be the installation of special ballot boxes so that people infected with the coronavirus can vote from their cars.

According to the 'Our World in Data' platform, Israel is the country that has administered the most vaccines so far, with around 9% of the population vaccinated, while in the United Kingdom and the United States they have barely reached 1%.

“Israel was one of the first countries to obtain the vaccine and is currently leading with the highest rate of vaccination in the world. It will likely be the first country to achieve mass immunity and hopefully return to a resemblance of normal life in just a few months from now", says the Secretary General of the Evangelical Alliance of Israel.

Israeli evangelicals, between the coronavirus crisis and political division

As in so many other countries, “the Covid-19 crisis has forced congregations in Israel to adapt, gathering online and doing everything they can to remain relevant and active. They have been partially successful but the serious challenge is the fight for their long-term viability”, Tees underlines.

The political crisis has not gone unnoticed by evangelicals in the country either, and “the churches are very divided at the political level. Most Arab evangelicals vote for the United Arab List, which in the last few years has united all the Arab political factions, which represent an unwieldy spectrum of voices”, Danny Kopp, a representative of the Evangelical Alliance of Israel explains.

However, “there is a sizeable minority of Arab evangelicals who vote for Jewish parties, because the United Arab List will not address Islamist persecution of the Christian minority”, he adds.

Meanwhile, “Messianic Jews are also divided, but tend to lean more towards right-wing and nationalist parties. This shows that that evangelicals are all over the map politically”.

The Evangelical Alliance of Israel points out that “communities here have very distinct identities and concerns. While this often allows for a rich mix of cultures and cross-pollination of ideas, it also frequently leads to conflict and an inability to appreciate the contributions of others”.

“Sadly, followers of Jesus in this land are often no different in reflecting these divisions. There would be no greater witness than a body of the Messiah that has truly learned to love thy neighbour as thyself. This is our greatest prayer”, they conclude.