Xi Jinping: “Only socialism can save China”

The Chinese government celebrates 100 years of the Communist Party with a great nationalistic display. Hong Kong and the persecution of religious minorities continue to be important human rights issues.

70,000 guests were present at the central event to celebrate the 100th anniversary of the Chinese Communist Party in the famous Tiananmen Square in capital Beijing.

Music, drama, and a military exhibition were part of the programme in which President Xi Jinping addressed the crowd wearing a suit that clearly alluded to the founder Mao Zedong’s portrait adorning the scenario.

Media analysts have spoken these days about the Chinese government’s efforts to “rewrite” the history of the last century. Films about the Communist Party are shown in cinemas around the country, special “red” tours are offered to tourists, and many have already visited the new Museum of the History of the Communist Party. Choirs around the geography sing about the glorious past of the country and critical assessments of the country’s past have been removed from the internet.

In his speech, Xi Jinping said: “No one should underestimate the resolve, the will and ability of the Chinese people to defend their national sovereignty and territorial integrity”, referring to Taiwan and Hong Kong.

In what is seen as a reference to the United States, the President added that “we will never allow anyone to bully, oppress or subjugate China”. 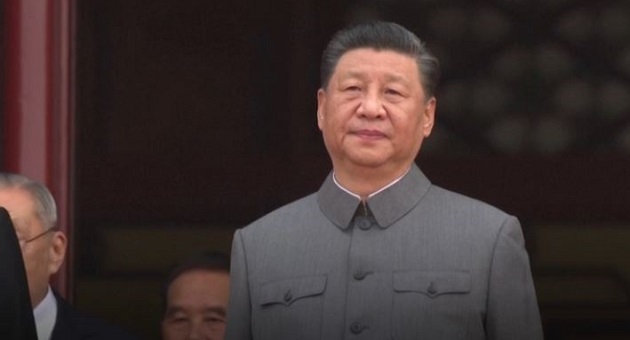 The leader of the Communist Party praised the population and the members of the socialist movement for the “new world” they had created and underlined that his leadership seeks to maintain “peace” and “stability” on an international level.

But added that anyone who dares to attack China “will have their heads bashed bloody against the Great Wall of Steel forged by over 1.4 billion Chinese people”.

Jinping praised the first one hundred years of Chinese communism, saying: “Only socialism can save China”. The event closed with the crowds singing a song titled: “Without the Communist Party There Would Be No New China”.

Persecution and other human rights issues

The celebrations come as Xi Jinping’s government continues to be under the radar of human rights organisations.

Thousands are thought to be executed every year, and the technological surveillance of the population is used to put pressure on religious minorities including ‘house churches’.

The process of ‘sinicization’ affects all areas of society, including religion. A controversial agreement between China and the Vatican has shown the difficulties of escaping the control of Beijing.

Pastors of free evangelical churches continue to struggle in their work. Foreign believers have been expelled, and Bible apps blocked.

Lately, the Hong Kong protests have been closely followed by the international community. Several key figures of the pro-democratic opposition are members of Christian communities. But also other minorities, like the Uighur Muslims, are suffering a strong persecution.

China ranks 17th in the Open Doors list of countries in the world where it is most difficult to be a Christian.

Published in: Evangelical Focus - world - Xi Jinping: “Only socialism can save China”